Airbus today revealed the A220 at a ceremony held at its Henri-Ziegler Delivery Centre, near Toulouse, France. The A220 effectively replaces Bombardier’s C Series aircraft following the July 1, 2018, closing of a joint venture between the two companies, in which Airbus gained a major interest in the existing C Series Aircraft Limited Partnership. 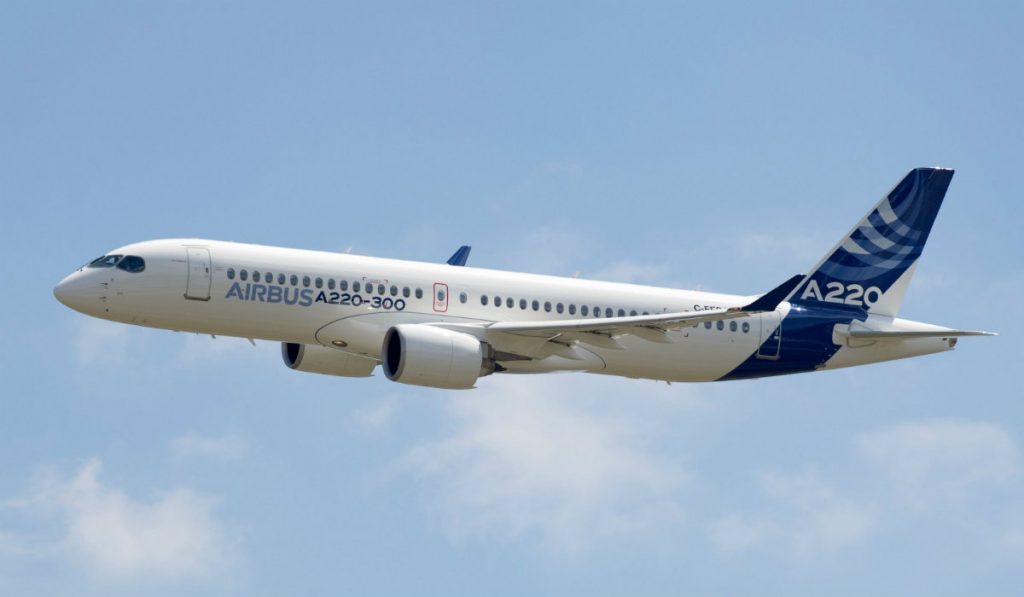 A freshly painted A220-300 lands in Toulouse

At 12:25 am CEST, in front of Airbus employees and members of the global news media, a new A220-300 landed directly from painting wearing its new Airbus name and colours.

The A220 family comprises two models, the A220-100 and A220-300, formerly Bombardier’s CS100 and CS300. The aircraft are built for the 100- to 150-seat market. Expecting the A220 single-aisle family to capture a large percentage of the estimated 6,000 aircraft needed in this 100- to 150-seat segment over the next 20 years, Airbus explains this commercial addition complements its existing A320neo family.

“Everyone at Airbus has been looking forward to this historic moment. Today, we are thrilled to welcome the A220 to the Airbus family and are honoured to see it wearing its new Airbus colours for the first time,” said Guillaume Faury, president commercial aircraft, Airbus. “I pay tribute to all the women and men at Bombardier and the supply chain who have strived over the past years to bring this fantastic aircraft to the world. The A220 now enters a new phase in its career with all Airbus’ resources behind it to further its commercial success worldwide.”

Eric Schulz, Airbus COO, added: “We are enthusiastic about selling the A220 thanks in particular to its technology which gives it a decisive edge in a very competitive market. I have received a lot of positive feedback from customers regarding the aircraft’s outstanding passenger experience, its lower fuel burn, lower weight and quieter engines. All these reasons contribute to my optimism that Airbus will support to make the A220 a great commercial success.”