Wings magazine visited Toulouse shortly after the historic flight for an in-depth look at the A380. 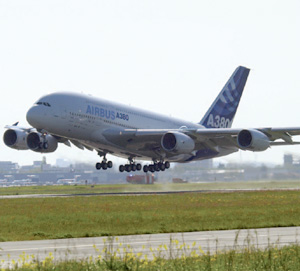 Jacques Rosay, vice-president and chief test pilot at Airbus, first
advanced the throttles on the world’s largest commercial aircraft on
Wednesday, April 27. Not only was over $14 billion in design and new
technology riding on his skills, but the future of the company itself.
At precisely 10:29 Toulouse time, Rosay lifted off into history on the
first of many successful test flights.

“When
I started the first takeoff,” said Rosay in a conversation with Wings,
“I had no thoughts on the significance of the external events. I was
here to fly the aircraft and my entire thoughts were focused on the job
at hand. If I had worried about all the other issues I would have
stayed home in bed.” Although the A380 uses fly-by-wire (FBW)
technology, Rosay was using it in its simplest form. “The only
automatic system turned on was the yaw damper,” Rosay said. “We planned
to fly the aircraft using Direct Law control until we were sure that
all the feedback signals were correct.” In Direct Law, the FBW
computers act as a straight-through control of the flight surfaces. For
every pilot input there is a direct movement of the particular control
surface and no additional signal conditioning from other computer
systems. “After I lifted the aircraft off the runway we climbed
straight ahead at a slightly lower-than-normal climb angle as I first
evaluated the feel of the aircraft in the pitch axis.” Preliminary
takeoff speeds were calculated to be V1 = 146 kts, VR = 146 kts and V2
=157 kts, with a takeoff roll of approximately 9,800 feet.

Once
satisfied with the pitch response of the aircraft, that channel was
switched to At the Toulouse delivery facility the Normal Law mode and
the same tests were carried out on the roll channel. On the first
flight, the landing gear was tested in both normal operation and
emergency extension, various flap positions were flown and the aircraft
was stalled in both clean and dirty configurations. “The aircraft
stalls very smoothly,” said Rosay. “There is no indication of roll or
yaw as the wing starts to stall first at the wing root. There is very
little vibration before the aircraft drops cleanly on the present
heading.” There were no surprises on the flight as Rosay, had ‘flown’
an engineering flight simulator extensively prior to the first actual
flight. Canada’s CAE will be providing A380 simulators once Airbus
provides the actual aircraft performance numbers from the flight test
data.

Despite weighing in at a husky 437,000+ kilograms, the
aircraft does not feel heavy in flight. “The wing loading is so low
that the aircraft feels very responsive despite its size and weight,”
Rosay said. “I have flown some crosswind landings already and had no
problem with control. In the engineering simulator, we were carrying
out landings with crosswinds as high as 55 knots.” Taxiing an aircraft
of this size is also not a problem. “We sit directly above the nose
gear and the distance to the mains is not much different than other
aircraft, so manoeuvring is no problem.” The position of the A380
cockpit, halfway between the two passenger decks, also provides for
improved ground visibility.

Since the first flight, Airbus made
seven more test flights before Wings’ visit. The aircraft had been
flown to FL430, its maximum altitude, and at Mach 0.89 – typical cruise
will be Mach 0.85. The test flight program is scheduled to last 2,500
hours with four aircraft participating. The first aircraft is heavily
instrumented with test engineering positions on both passenger decks.
This aircraft will provide the majority of initial performance and
manoeuvring data. Serial number 4 (second aircraft to be completed)
will aid in this part of the program. Serial numbers 2 and 7 will fly
first to Hamburg where their interiors will be installed before
carrying out additional test flying. These tests will be based on
passenger cabin fixtures, air movement, inflight entertainment systems
and a myriad of systems surrounding an aircraft that will carry 555
passengers in its normal configuration. Emergency exit certification
will be carried out at a specially-designed hangar in Hamburg; 538
passengers, 11 cabin crew and two flight crew will exit from the main
deck. Another 315 passengers plus seven cabin crew will exit from the
upper deck. All the participants must be able to exit the aircraft, in
the dark, using only half of the 16 emergency exits, in 90 seconds to
achieve JAR/FAR 25.803 certification. Cold-weather trials will be held
in Irkutsk, Russia and a series of longduration passenger-proving
flights will be carried out before delivery of the first aircraft next
year.

Relatively few test hours are required for the A380 due to
the testing and certification process perfected by Airbus. A
high-speed, real-time data link between the aircraft and several
telemetry stations in France provide the ground test engineers with
instant data on aircraft systems during flight. This information allows
for faster response times to adjust software or reconfigure aircraft
systems.

During test flight #8, Wings observed some of the test
from the telemetry station in Toulouse. Flying at 35,025 feet over the
Bay of Biscay, aircraft #1 was cruising at Mach 0.853 with engines one
and four at flight idle and two and three at 97%. Fuel flow on the
powered-up engines was 4,500 lbs/hr. The Rolls-Royce Trent 900s,
derated to 70,000 lbs thrust, provide a quiet, fuelefficient flight.
The Thalesmanufactured cockpit displays are similar to the rest of the
Airbus family but are larger, incorporating vertical profile
presentations along the bottom of the LCD display. The flight
management system has undergone a radical facelift and now includes a
trackball allowing the pilot to move a cursor on the navigation
displays to modify the aircraft flight plan. Flight crew training will
be similar in time to the transition between other Airbus products, and
new innovative virtual-reality imaging will provide maintenance
personnel with an ingenious look at aircraft maintenance tasks.

The
A380 maintenance program will provide two options: a flexible plan with
tasks allocated to visits according to interval limits, resources and
downtime, or a prepackaged plan with tasks allocated to letter checks.
Target intervals have already been determined through a major planning
program established by over 200 vendors and consists of: Base
Maintenance – 750 flight hour multiples; Light Maintenance – 24 months;
Intermediate Check – 6 years; and a Heavy Maintenance visit every 12
years. The primary maintenance data tool, the Airbus AirN@v electronic
information system, will allow an AME anywhere in the world to access a
knowledge base for the aircraft.

Although carbon fibre
composites are used throughout the structural components of the
aircraft and flight controls, the skin is mainly composed of GLARE, a
hybrid laminated material made up of alternating layers of aluminum
foils and glass fibers. This lightweight material has improved
resistance to corrosion or damage and is lighter than conventional
aluminum skin. Unlike a composite skin, the GLARE material can be
repaired using conventional tooling and methods employed today on
aluminum-skinned aircraft. For the A380, Airbus has specifically
addressed maintainability worldwide to ensure that global customers
will be able to support the aircraft.

Initial revenue flights
are scheduled with launch customer Singapore Airlines in the second
half of 2006. By that time, 20 major airports worldwide will be ready
to handle the A380. These airports now handle 52% of all worldwide B747
flights. By 2010, 60 airports accounting for 80% of B747 traffic will
be able to handle the A380. At present, Toronto and Montreal are the
only airports shown on the Airbus planning sheets; however, airports
such as Calgary and Vancouver could be brought up to speed fairly
quickly as the aircraft itself requires little more than the present
747 for ground handling. Gate configurations are the biggest issue as
debarking and embarking 555 passengers would take a long time using a
single jetway. Prior to the Paris Air Show in June, Airbus had 154
orders from 15 customers for the A380. Jhjk

Perhaps the biggest
challenge facing Airbus is marketing the aircraft. Airbus salesman
extraordinaire John Leahy, chief commercial officer, is satisfied with
progress to date but says the stagnant economy in Europe and the US
will impact sales of all aircraft types. ICAO’s projected growth in
revenue passenger kilometres from 3.193 trillion in 2003 to 9 trillion
RPKs by 2023 has been set back by at least one year. Of the anticipated
sales of 17,328 aircraft at a value of US$1.9 trillion by this date,
Leahy feels that 1,648 will be in the large aircraft category, both as
passenger and freighter aircraft. In value this would be 22% of total
aircraft sales or US$418 billion. Sales of aircraft with more than 500
seats are expected to total at least 517 units. Airbus estimates the
breakeven point for the A380 program is between 220 and 280 aircraft.
At this point in time, the future may still be a bit clouded for the
A380; but as the Chinese and Indian economies continue double-digit
growth and if Europe and the US recover from their present economic
woes, Airbus stands to prove that its vision of a very large aircraft
was the correct choice.