Darren Locke sat down with Joseph Randell at the Air Canada Jazz/Bombardier CRJ705 launch ceremony in Dorval, Quebec this past May. 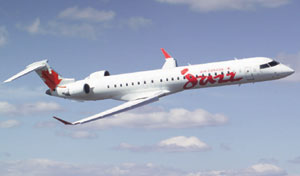 TODAY IS CERTAINLY A PROUD DAY FOR BOTH AIR CANADA JAZZ AND BOMBARDIER
AEROSPACE WITH THE LAUNCH OF THE CRJ705. HOW DOES THE CRJ705 REFLECT
THE GROWING ROLE OF AIR CANADA JAZZ WITHIN THE AIR CANADA FAMILY OF
COMPANIES?
The
705 really helps diversify Jazz and the type of business and sector of
the industry that we operate in. Jazz came about as the result of a
merger of what were previously five unique regional carriers that were,
within their regions, operating primarily short-haul Dash-8 services.
But the introduction of the CRJ, first of all the 200, but most
especially the 705, gives us the ability to serve markets that up until
now have really not been attainable for Jazz. Those are some very
longhaul markets, like Calgary- Houston. This summer for a couple of
months we’ll be operating Toronto-Phoenix. (It gives us) as well the
ability to supplement Air Canada in a lot of very busy business
markets, for instance between Toronto and Montreal and the US
Northeast, and to offer the same level of comfort on these airplanes
that people have been accustomed to with A319s, 320s, 321s.

Essentially
it allows Air Canada, through Jazz, to offer customers the same degree
of comfort, but lowers the trip cost on the aircraft quite dramatically.

IS
IT FAIR THEN TO CALL THE 705 A ‘GAME CHANGER’ FOR JAZZ, AND WILL THE
705 SHARPEN YOUR COMPETITIVE ADVANTAGE VERSUS THE ALL-B737 FLEETS AT
WESTJET AND CANJET IN PARTICULAR?
The 705 is a ‘game changer,’ I
believe, and not just for Jazz but for many because what the 705 does
is give the ability to operate longer-haul services, multifrequency
services with Regional Jet economics and with superior comfort for
customers. This is unique in terms of the space and the comfort that’s
offered both in the Executive Class cabin … and of course the increased
seat pitch in the back at 34 inches, which is far greater than our
competitors. So from that point of view, this aircraft is certainly a
‘game changer.’

We’ve been changing the game in Western Canada
as well with the introduction of our CRJ200s. We’re seeing a rebound in
terms of our market share for Air Canada in Western Canada, and we’re
being very successful. The acceptance of the Regional Jet on a lot of
these routes has been just phenomenal.

JUST A COUPLE OF YEARS
AGO WESTJET RECEIVED AN EMBRAER ERJ AT ITS CALGARY BASE FOR TESTING AND
EVALUATION, BUT SUBSEQUENTLY WESTJET DID NOT PROCEED WITH PROCUREMENT.
OBVIOUSLY, DEPLOYING BOMBARDIER CRJS HAS BEEN A SMART MOVE FOR AIR
CANADA JAZZ – DO YOU FORESEE WESTJET IN PARTICULAR MOVING IN THE SAME
DIRECTION?
WestJet is unpredictable – they change their mind
sometimes. So I can’t really predict what WestJet will do, but when we
brought our first CRJ200 to Western Canada last fall, the first landing
we made was in Calgary. We passed by the WestJet hangar in Calgary, and
I couldn’t help but think that the environment is about to change.

There
are quite a number of routes in this country and transborder routes
where no matter how low you put your prices, 737s are too large – you
just can’t sell the seats. There are only so many people that want to
fly at any price, and what we’re seeing is that our size of aircraft
and these regional airplanes allow us to be competitive, totally
competitive on price, but have a lower trip cost. Because it doesn’t
matter – if you can’t sell those extra 50 seats, you’re far better off
economically operating a Regional Jet.

We’ve seen it time and
time again. WestJet went into some of the inter-Ontario markets, Jetsgo
tried some of those markets like Timmins, but operating one flight a
day with a large airplane just doesn’t cut it from a customer
perspective. Obviously, in a market where you can support hourly A320
services it’s not really a place for a Regional Jet, unless there’s a
time of day where you just don’t need the seats. But in Canada where
the markets are of a limited size, and you can stimulate them, but only
to a limited extent, this aircraft is clearly superior.

WHAT ABOUT AIR CANADA JAZZ’S EMPLOYEES AND MANAGEMENT? HOW IS INTRODUCTION OF THE CRJ705 BEING RECEIVED?
People
are really excited – I can’t emphasize that too much! They’re just
really excited about us taking delivery of this aircraft. There were a
number of people a few years ago, when we merged the carriers and we
were forced to downsize things dramatically, who couldn’t really see
the future. But this is our future – this gives us new life.

We
have seen shrinking short-haul markets throughout Canada and in fact
throughout North America, where people have gone to the roads. The
government fees and charges, and the security hassles and fees, and all
of those sorts of things, that’s really been our competition on the
short-haul and it’s been a tough, tough market on the real short-haul.
We’ve removed service from quite a number of those routes, and we said
that was going to happen. We told people in government that “hey, what
you’re doing is going to seriously damage our industry and the
communities that we serve.” I don’t think anybody listened very well.
But for us though, at Jazz, what this does is it gives us a place in a
market which we didn’t previously serve, and this is where our growth
is – longer-haul flying using Regional Jets. And this is where our
strength is, in terms of our operating economics.

DO YOU FORESEE
NEW ROUTE OPPORTUNITIES BEYOND CALGARY HOUSTON FOR AIR CANADA JAZZ,
PARTICULARLY INTERNATIONAL, AS A CONSEQUENCE OF INTRODUCING THE CRJ705?
We
do not plan on operating this aircraft on long-haul overwater services.
But certainly, new routes within North America, I think generally this
aircraft will operate within mainland North America. But again, Air
Canada purchases our capacity, and I know that Air Canada constantly
looks at new route opportunities and this is where this aircraft,
especially in the development of new routes – it’s got the right size
and the right economics – can really provide Air Canada with a low-cost
way of exploring new opportunities.

And with airplanes like this
you’ve got to have a pretty good business component. This is not an
airplane that you would see in highdensity charter markets. It’s not
the right aircraft for that, it doesn’t have the right economics. But
in terms of long, thin business routes or short-haul, medium-haul
business routes, this is where this aircraft really has its niche.

DO YOU FORESEE AN EVENTUAL CANADIAN-BUILT REPLACEMENT AS WELL FOR JAZZ’S DASH SERIES PROPELLER FLEET?
The
latest Q-series airplanes are still very competitive, and I don’t see
any great strides that have been made technologically since those
airplanes were designed. They are very fuel-efficient.

WITH THE
DEMISE OF JETSGO NOW VERY MUCH A REALITY, WILL THIS CREATE
OPPORTUNITIES FOR AIR CANADA JAZZ AND MAKE A TOUGH, COMPETITIVE
INDUSTRY A LITTLE MORE STABLE AND PROFITABLE?
I think as long as
there’s sanity in the pricing side of the business it is more stable.
We’re still subject to things such as fuel, etc., but obviously what
was happening is prices were unsustainable. Although consumers benefit
in the short term, it does not create stability. Jetsgo itself, they
were in a number of the larger markets – I don’t think they were very
successful in the smaller markets that Jazz concentrates on. So it’s
not going to make a huge difference for us, but for the industry
overall I think it will be helpful to have more rationality in pricing
and capacity. There have been a number of bankruptcies in Canada that
have unfortunately left a bad situation.

WHAT ABOUT THE
POSSIBILITY OF TRUE RECIPROCAL CABOTAGE BETWEEN CANADA AND THE U.S.?
COULD THIS ALSO MEAN A VERY BRIGHT AND PROFITABLE FUTURE FOR AIR CANADA
JAZZ AND THE CRJ705?
Our position is the same as Air Canada’s –
opening the borders is something that would be quite interesting for
us. We’re very competitive, and frankly I believe the issue is more
getting the Americans to agree, rather than Canadians. But I think
whatever is done should certainly be reciprocal.

THE PAST FEW
YEARS HAVE CERTAINLY PRESENTED A CHALLENGING OPERATING ENVIRONMENT FOR
ALL NORTH AMERICAN AIRLINES. WOULD YOU SAY THAT THE HIGH QUALITY OF THE
PEOPLE AT AIR CANADA JAZZ MADE A REAL DIFFERENCE IN HOW JAZZ FARED?
Very
definitely. First of all, safety is our top priority, and it has been
number one and will continue to be number one. Despite the complex
merger and the difficult operating circumstances, the difficult
economics that we’ve had in our business, and all of those have
affected Jazz (and) the parent company’s difficulties, we’ve maintained
a safe operation. Our reliability now is better than it’s ever been in
terms of our operational performance.

With Jazz, the roots go
back to the 1930s. There’s a long history and a long string of carriers
that came together to create Jazz, air carriers that were well known
and respected within the business, and we have that same degree of
professionalism and dedication today in Jazz. We brought these airlines
together; we downsized it by 35%, with a lot of restrictions on us –
financial, government restrictions, etc. And then of course the
bankruptcy protection. But we’ve come through that stronger than ever
before. Determination is what’s been consistent among our people.
They’re determined to make this work; they believe in the company; they
believe in what can be done.

We’ve worked closely with our
unions. We have a very good relationship overall with our unions, which
is very important, and without their support … we would not have
accomplished this. But when you’re under threat people realize that
although change is tough it does have to happen. We did a lot of the
right things, and we’re in great shape going forward, and there’s a lot
of leverage in Jazz to take advantage of growth opportunities in the
future.

WHAT DO YOU SEE AS THE FUTURE FOR AIR CANADA JAZZ, AND HOW DO YOU THINK AIR CANADA JAZZ WILL CONTINUE TO GROW AND EVOLVE?
The
future for us will hopefully involve the operation of even more
Regional Jets. The Q400 is (also) a distinct possibility for us – it
has some very interesting characteristics, and turboprops under 300
miles still make a lot of sense. But aside from that, we’re growing our
charter business. There’s been a good demand for charters of the
aircraft sizes that we have, Dash 8s as well as RJs. Our maintenance,
repair and overhaul (MRO) business is strong – we have two great
facilities in London and Halifax with a lot of expertise with
Bombardier equipment.

Going forward, it is possible for us to
work with other carriers as well and other Star Alliance members, etc.
in terms of the provision of lift and services. So those are the things
that we see in our future. We see further growth, becoming stronger,
and doing what we do well.