News
At the Gate: Finding the right formula

Now that the C Series appears to be finally gaining traction, it’s time for Bombardier to rejuvenate its regional aircraft program with an eye towards a favourable U.S. market. That’s one of the recommendations made by Richard Aboulafia, vice-president, Teal Group, Fairfax, Va., during a presentation to the Montreal-Ottawa chapter of the American Helicopter Society. 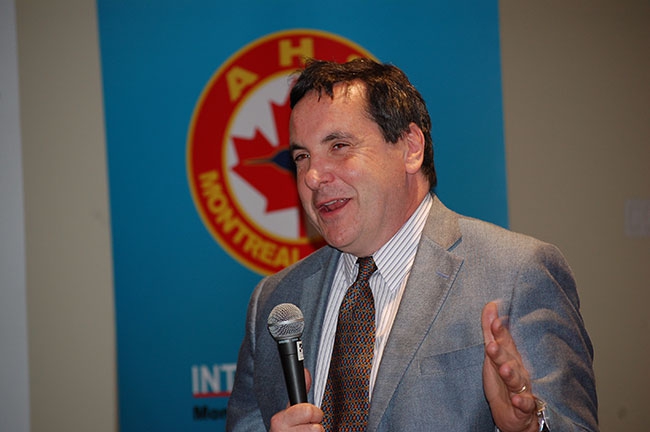 Bombardier’s C Series is ideal for the U.S. commuter market Now that the C Series appears to be finally gaining traction

The analyst said the C Series was a good aircraft and estimated Bombardier could sell about 60 of them a year, but declined to predict the long-term profitability of the C Series. The best short-term strategy for Bombardier would be to concentrate on the regional aircraft market in the U.S. where it could provide a solution to “scope clauses” with a re-engined and upgraded CRJ-900 using something lighter than the PW1000, the same engine used by the C Series. Aboulafia suggested the GE Passport engine used on the Global 7000 could probably be used on the CRJ 900.

After his presentation, Aboulafia was asked if there was any new aircraft coming to market in the next few years that could pose a threat to the success of the C Series.

“There is nothing that could threaten the C Series except the realities of being Bombardier. Do they have the financial resources to compete with Boeing and Airbus?” he asked.

Once again, Bombardier led all other Canadian companies in terms of research and development spending in 2015, with $2.3 billion dedicated to R&D, primarily on developing the C Series.  The top 100 Canadian companies spent a combined $12.8 billion on R&D in 2015, a seven per cent increase from 2014. Among other Quebec-based companies, BRP (Bombardier Recreation Products) spent $164 million on R&D (21st place) and CAE was right behind, spending $139 million.

In early February, the federal Liberals added some $372.5 million in interest-free loans to the C Series and Global 7000 programs, though the move was widely panned by the critics for not being enough.

Ottawa’s plan to raise the cap on foreign ownership of Canadian airlines from 25 per cent to 49 per cent, in an effort to increase competition and reduce prices, would not necessarily do the trick, said Aboulafia.

During his presentation, Aboulafia noted the commercial and military markets delivered a record $181 billion worth of aircraft in 2015 ($101 billion from Boeing and Airbus alone) and that the market grew 53 per cent between 2006-2015 and by an annual growth rate of 9.2 per cent over the last 12 years.

Aboulafia doesn’t think that growth rate is sustainable nor does he feel a bust cycle is coming with an order backlog of 12,000 aircraft over the next few years, combined with IATA’s prediction of an annual seven per cent increase in available seat miles along the way.

The twin-aisle market hasn’t grown much lately and is getting crowded, with 10 aircraft in the segment combined between Boeing and Airbus. Most industry watchers expected record numbers in the category, but it saw a cooling period instead, said Aboulafia, noting the Airbus 380 and Boeing 747 are dying.

“The A380 was poorly thought out. Profitability would have been better with a smaller aircraft and only two engines,” he said. “In the event of a downturn, Airbus is stuck with it.”

In 2016, the top five aviation programs accounted for 40 per cent of volume and it marked the first year that saw total industry growth decline (including rotorcraft and military aircraft) by one per cent compared to a year earlier.

Aboulafia remains “cynical” about China developing new aircraft models. “State-owned aircraft typically don’t do well in the commercial market, but they might do better with the COMAC C919,” he said.

Turning back to the C Series, Aboulafia maintains Bombardier president and CEO Alain Bellemare is doing the right things which allows him to negotiate aggressive deals, although there is not a lot of margin for error.

“I’ve never seen a program with so much risk, but it’s still a good airplane,” Aboulafia said. “The C Series program is making other Bombardier programs starved for resources.”