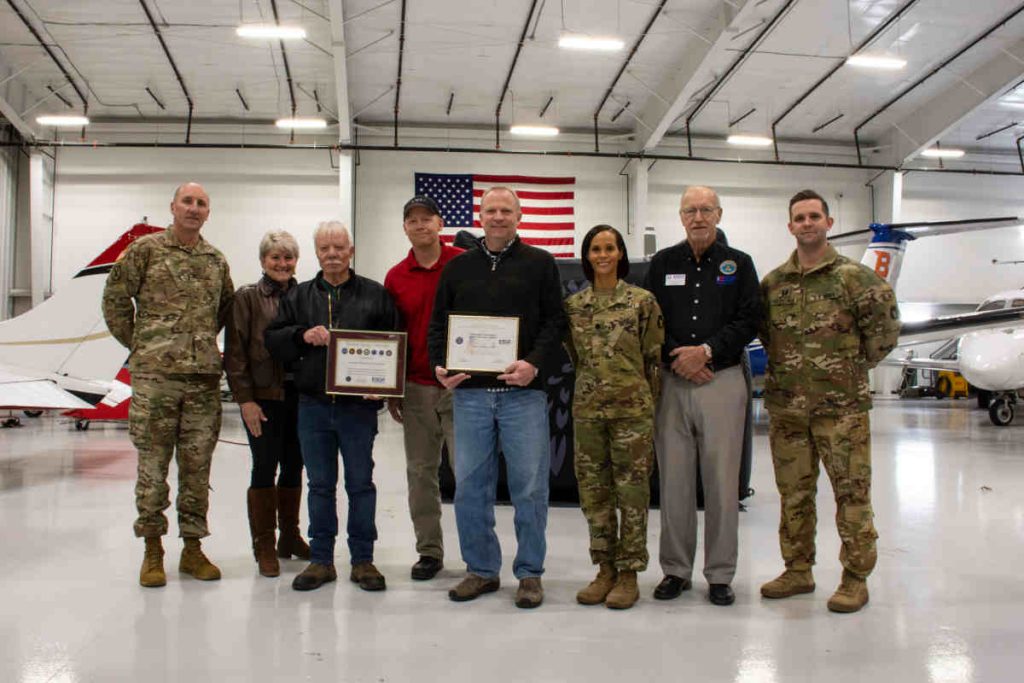 ASU Director of Aviation Services Chris Schoonover also received the ESGR Patriot Award, which reflects the efforts made to support citizen warriors through a wide-range of measures including flexible schedules, time off prior to and after deployment, caring for families, and granting leaves of absence if needed. Both the Seven Seals Award and Patriot Award are given by the Office of the Secretary of Defense for the United States.

Both Awards were presented by representatives of the National Guard. ASU owners Mike and Chris Atwood received the Seven Seals Award on behalf of the company.

“This is a tremendous honour to receive,” said ASU Founder Mike Atwood, an Army Veteran. “We love our country and the men and women that work at ASU know that supporting our nation, our troops and our National Guard members is an integral part of ASU. In fact, more than 40 per cent of ASU’s workforce have served or are currently serving in the United States military.”

Schoonover is an Afghanistan veteran and former AH-64D Battalion Commander. He retired from his full-time position in the Idaho Army National Guard in 2019 as a Lieutenant Colonel. Schoonover was nominated for the Patriot Award by ASU Senior NVG Instructor Pilot K Kirkendall, who is a Standardization Pilot for A/1-183rd.

“ASU greatly values veterans’ service, and one of the first things that you see when you come into the building is the Armed Forces Wall of Honor,” said Kirkendall. “ASU has honoured the service of its veterans by displaying individual photos with their Branch of Service and dates to celebrate their service to this great Country. They also value the experience our Veterans have gained through their service in the Armed forces.”

ASU Vice President of Sales and Marketing Chad St. Francis is also a retired 22-year Veteran of the United States Army. “Supporting our military is in the very fabric of our DNA at ASU,” said St. Francis. “We are extremely honored to receive the award and to employ so many great men and women that serve and have served our nation. ASU’s mission is to help save lives. Our National Guard members are ready to do that every day. That is why we will continue to support the ESGR mission not only in the United States, but around the world.”