The satisfaction of helping people in need. 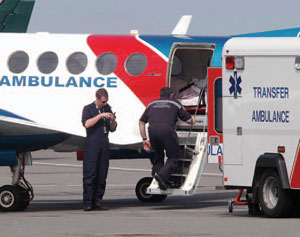 The process to select one or more fixed-wing air ambulance service
providers in BC is officially under way, says Mike Essery,
superintendent of aviation services and primary administrator of
fixed-wing air ambulance for the Ministry of Health Services. Essery
expects an RFP (Request For Proposals) to be released by BC Ambulance
Service (BCAS) around October, after consultations with industry on
what can be done to improve the current fixed-wing air medevac system.

This
follows Western Express Airlines (Westex) going out of business and
loss of the fixed-wing air ambulance service it provided for the
province. Even before Westex closed its doors, “service issues were
creating problems for health care providers,” said Essery. “We needed
consistency to meet the demands of the system.” Combined with cash-flow
problems, aircraft problems, and a BCAS contract which was at times
strictly enforced, it was cumulatively more than the struggling airline
could handle.

BCAS had already been chartering with several
independent air carriers to cover shortages when Westex was unable to
provide the needed services. When Westex did close down for good, BCAS
selected four companies to cover the province-wide air ambulance
service on a newly negotiated one-year interim contract to allow time
for a new RFP to be created.

The companies selected to replace
Westex were the runners-up in the original bid process in the different
regions of BC. The one exception to that was Canadian Global, which was
selected to provide the only jet medevac service.

BCAS now
operates air ambulance flights from bases in Vancouver, Prince George,
Kelowna and Prince Rupert. Vancouver has one Lear 35 on permanent
standby using Canadian Global Air Ambulance. Helijet has two Beech King
Air B200s, each rotated on a 12-hour cycle to provide 24-hour coverage.
(Helijet also has two Sikorsky S76 helicopters, each on a 24- hour
schedule). Carson Air has one King Air 350 on 12- hour call, as does NT
Air. (Vancouver Island Helicopters operates a Bell 222 on permanent
call from its base at Prince Rupert.)

With an annual operating
budget of about $33 million, BCAS air ambulance flights last year moved
9,470 patients, with a combined total of 2.8 million air miles flown by
all medevac service providers.

Newcomer to fixed-wing air
ambulance service Ken Glaze, director of flight operations and
vice-president of development at Helijet International, said he sees
Helijet “doing this for a long, long time.” Helijet is best known for
its scheduled Vancouver-Victoria helicopter passenger service, but has
also been operating helicopter medevac flights for BCAS for several
years in the Vancouver and Victoria areas.

In recent years
Helijet has expanded its operation to include fixed-wing services.
Development of its new fixedwing medevac service came about in two
ways, said Glaze. An opportunity to share a passenger route with Alaska
Airlines provided Helijet the motivation to begin a scheduled
fixed-wing route from Seattle to Campbell River on Vancouver Island.

Then,
while Helijet was getting its operator’s certificate in place for the
new scheduled fixed-wing service, the bid for the air ambulance
contract came out and BCAS requested that Helijet bid on the contract.
“We had to do our homework and understand what an airplane can do,”
said Glaze. “Just because a plane can do 260 knots doesn’t mean it can
do 260 knots between this point and that. When the job takes longer,
that just increases cost.”

Equipment was the biggest challenge
Helijet faced to begin fixed-wing medevac service. “Finding good people
can always be a challenge,” Glaze said, “and getting the operating
certificate; that was just work, Finding a good airplane has been
difficult.”

The push for higher standards in more expensive
aircraft has caused buyers to look for unrecognized opportunities in
otherwise less obvious airplanes. “A lot of operators who were faced
with RVSM (Reduced Vertical Separation Minimums) upgrades found the
King Air 200 a cheaper alternative, so all the 200s we saw were
disappearing and they were costing more!” said Glaze.

After just
a short period into the new contract for fixed-wing ambulance service,
Glaze was confident that the operation would be profitable.

Glaze
credits Helijet’s success to the 145 people who work for the company.
“It starts at the top,” he said. “We try to hire really good people;
you don’t have to work hard to create a safety culture if you hire
professionals.” After Helijet got the contract to provide BCAS with
fixed-wing medevac service out of Vancouver, it hired Ian Loberg. A
former base manager for Westex in Prince George, Loberg was put in
charge of getting the operation together and hiring the people needed
to do the job.

With nine full-time pilots and another contract
pilot, Helijet began operating the medevac service on February 19,
2005. One of the ironies of the new Helijet operation is the depth of
its connection to the now non-existent Westex. Of the nine full-time
fixedwing medevac pilots at Helijet, seven are from Westex, as is one
of its two King Air B200s and all four of the maintenance personnel who
to keep the planes operational.

With the need to fly into some
of BC’s most remote areas to pick up injured or seriously ill patients,
the pressure to ‘get there’ can be significant. Essery said it’s
standard operating procedure for BCAS to not disclose the nature of the
patient’s condition until after a pilot has confirmed that he can make
the flight safely with the weather and other factors affecting it. “We
don’t push weather, we don’t push situations,” said Essery. “We’re in
the patient transfer business, not the rescue business,” he added.

When
the pilot determines that it is not possible to make the flight safely
at the time, the practice is to ask the pilot to monitor the situation
and notify BCAS if there is a change. Regular checks are made on an
hourly basis, but Essery stressed that they’re no more frequent than
that to prevent a decision being made based on pressure from above. In
instances when it’s critical to get to the patient as soon as possible,
a flight will be started with the goal of landing at an airport as
close to the destination as possible, and having ground transportation
complete the trip.

Dave Carmichael, superintendent of
rotary-wing air ambulance operations with BCAS, said “It’s very
important that there never be any pressure on the flight crews to
conduct a flight; safety of the people on board is everything.” With
the failure of Westex, Essery said, “our people adapted to it; new
crews, different planes, unfamiliar equipment.” Carmichael agreed: “Our
paramedics care so much about our patients that they stepped up and
saved the day. I’m in awe of the bedside manner, the skill and care
that our guys have, its really mind-blowing!”

Essery said BCAS
is looking to hire more Advanced Life Support (ALS) paramedics, because
demand for critical-care transport service continues to increase. And
while the job demands a high level of training, with added knowledge of
aero medicine and additional medical training, Essery said “we don’t
want to take unnecessary risks in the service delivery model. It
behooves us to stay with the trusted and true, because we’re just going
to get busier and busier.”

Druvi Ameresekere, Helijet’s training
captain for the King Air B200 and a medevac pilot for three years, said
“It’s the most interesting and most satisfying flying I’ve ever done.
It’s a satisfying feeling that you helped someone get the care they
needed. I’m happy to say I did the best I could; the satisfaction is
knowing you did what you could.”