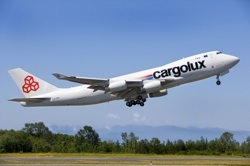 The Boeing Company projects that the global air cargo market will
continue to exhibit strong, long-term growth, according to the
company's Current Market Outlook 2008. During the 20-year forecast
period, Boeing projects that the industry will grow at an annualized
average of 5.8 per cent with the world freighter fleet increasing from
1,948 to 3,892 airplanes.

This growth requires a total of 3,358 airplanes joining the freighter
fleet by 2027, taking into account anticipated airplane retirements of
1,414 airplanes, according to the annual Outlook, which was released
prior to the 2008 Farnborough Air Show.

The fleet additions will include 863 new production freighters, with a
value of about $206 billion in current U.S. dollars, and 2,495
airplanes from conversions. Widebody freighters will dominate the new
production freighter total and 641 will be of the large freighter
segment (more than 80 tons (72.6 tonnes) capacity). Demand for new
production equipment is driven by operational efficiency and
reliability, as well as environmental and regulatory pressures,
including noise, emissions and aging.

"The forecast is based on a number of factors, most significantly
economic growth in diverse areas of the world," said Jim Edgar,
regional director, Cargo Marketing for Asia. "Over the long-term,
global economic growth will drive demand for new, high-value products
as well as seasonal perishables that people have become accustomed to
enjoying."

More than 60 per cent of the fleet additions will be in the widebody
category (medium widebody) – with payloads of 40 to 80 tons (36.3 to
72.6 tonnes) – plus large freighters, increasing their share from 61
per cent of the current fleet to 65 percent of the 2027 fleet.
Consequently, there will be an increase in overall average freighter
airplane payload, consistent with prior years' forecasts.

"We expect several trends to continue – dedicated freighters will
continue to provide an increasing proportion of air cargo capacity,
going to nearly 54 per cent, and the industry will continue to move to
larger airplanes," said Edgar. "Additionally, freighters will continue
to comprise about 10 per cent of the world jetliner fleet during the
forecast period."

The share of standard-body freighters (defined as less than 45 tons
(40.8 tonnes) capacity single-aisle body width) will decrease from 39
per cent to 35 percent over the next two decades.

In each of the past three years, Boeing has booked record numbers of
new production freighter orders, a total of 236 airplanes, dominated by
the company's new 777F and 747-8F models, as well as 56 orders for
Boeing Converted Freighter models.

Boeing freighters continue to provide more than 90 per cent of the
world's freighter capacity, due to the industry preference for larger
Boeing production and converted freighters. Boeing offers a complete
family of production freighter airplanes, including 747-8F, 777F, 767F
and 737-700C (convertible), as well the Boeing Converted Freighter line
– 747-400BCF, 767-300BCF and MD-11BCF – and smaller airplane
conversions through proprietary data licensees.

The Current Market Outlook is available on the company's website at:
www.boeing.com/commercial/cmo .

The Boeing World Air Cargo Forecast 2008/2009, a more detailed study,
will be issued at the 2008 International Air Cargo Forum and Exposition
in Kuala Lumpur, Malaysi