“We are very happy with our continued momentum in aerospace, where our transformation is progressing ahead of plan.” 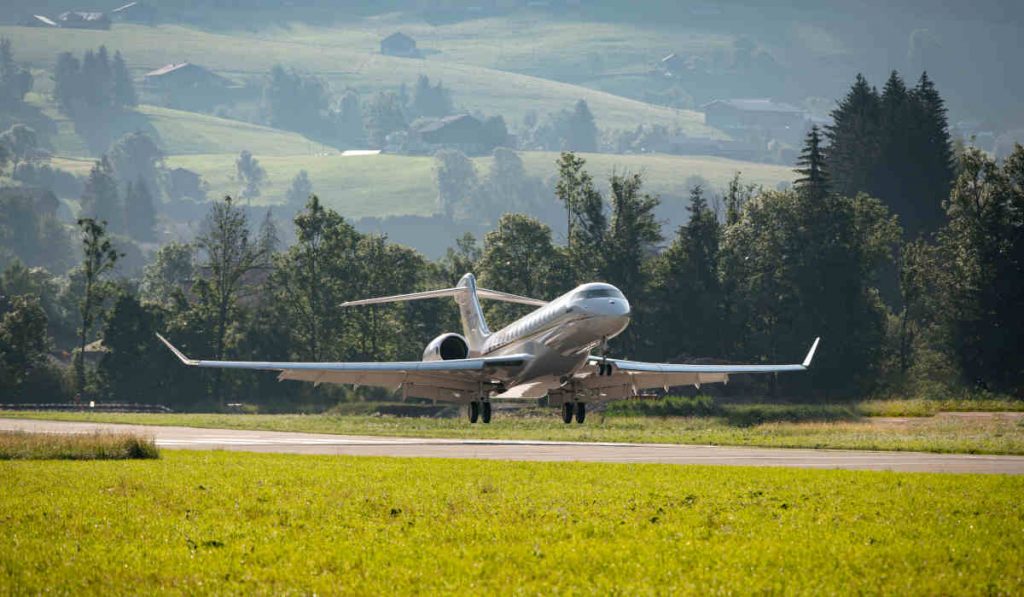 A Global 7500 lands at Gstaad Saanen Airport to illustrate its short-field performance in the Swiss Alps. (Photo: Matthias Geiger)

Bombardier today reported its second quarter 2019 results, ended June 30, and provided an updated guidance for its current fiscal year, which reflects the consolidation of its aerospace assets into a single reporting segment, Bombardier Aviation. The new guidance also reflects additional investments and costs needed to transform Bombardier’s Transportation (rail) business unit by the end of 2020.

With struggles in its rail unit continuing, Bombardier posted a net loss $36 million in the second quarter of 2019, down from the corresponding quarter of 2018 when it had a positive net income of $70 million. Revenue generated for the most-recent quarter remained positive at $4.3 billion, which Bombardier states to represent nine per cent organic growth, driven mainly by what it describes as higher aircraft deliveries and aftermarket growth.

In terms of its updated guidance, Bombardier’s new earnings forecast for the full year is in the range of $1.2 billion to $1.3 billion, reduced from its previous expectations of $1.5 billion to $1.65 billion. The company in 2019 plans to add manufacturing and engineering capacity in Transportation totaling $250 million to $300 million. This cost focuses on completing what Bombardier describes as late-stage, legacy projects – primarily in the U.K., Germany and Switzerland – and to ensure the delivery schedule for other rail projects.

“At Transportation, we have made significant progress and remain on track to complete the transformation by 2020,” said Alain Bellemare, president and CEO, Bombardier Inc., who noted the company’s need to ramp-up for delivering on a strong Transportation backlog, which amounted to $33.6 million at the end of Q2 2019.

As opposed to its new guidance that reflects aerospace consolidation, the company’s 2019 second quarter financials still reported results from its three distinct business units in the space, including Business Aircraft, Commercial Aircraft, and Aerostructures and Engineering Services. Revenue in the Business Aircraft segment for Q2 2019, reaching $1.4 billion, grew six per cent relative to Q2 2018. Aircraft deliveries in the segment remained stable at 35 in Q2 2019 versus 34 in Q2 2018.

The current reporting period included the delivery of two Global 7500 aircraft, which became commercially available in December 2018 as Bombardier’s new flagship business jet. This segment had an order backlog of $15.3 million in the second quarter of 2019, up seven per cent from $14.3 one year ago.

“We are very happy with our continued momentum in aerospace, where our transformation is progressing ahead of plan,” said Bellemare. “We have successfully addressed our underperforming commercial aircraft programs and are now fully focused on business aviation, where the ramp-up of Bombardier’s largest growth program, the Global 7500, is proceeding as planned, as are our aftermarket growth strategy and our product portfolio enhancements.”

In the Commercial Aircraft segment, Bombardier posted a revenue decline of 16 per cent reaching $516 million in Q2 2019 relative to $616 million in Q2 2018. As a key divestiture of its aerospace restructuring efforts, Bombardier’s Commercial Aircraft segment recorded gross proceeds of $298 million during the quarter by completing the sale of its Q Series program assets to what is now called De Havilland Aircraft of Canada, a wholly owned subsidiary of Longview Aviation Capital.

During the most recent quarter, Bombardier also entered into a definitive agreement with Mitsubishi Heavy Industries for the sale of its regional CRJ jet program for a cash consideration of $550 plus MHI’s assumption of liabilities amounting to approximately $200 million. This transaction is expected to close during the first half of 2020.

Revenue in Bombardier’s Aerostructures and Engineering Services segment for the second quarter of 2019 reached $565 million, which is a 24 per cent improvement relative to the $455 generated in last year’s corresponding quarter. The company states this growth is related to the production ramp up of the Global 7500 and A220 programs. The most recent quarter marked the one-year anniversary of Bombardier’s partnership with Airbus, focusing on the A220 aircraft series (formerly CSeries), which has added close to 300 new orders and commitments to the backlog during this time period.

As part of its plan to restructure aerospace into a single Bombardier Aviation unit, the company continues to pursue the divestiture of its Belfast and Morocco aerostructures businesses as it focuses on such capabilities in Montréal, Mexico and the recently acquired Global 7500 wing operations in Texas.

Bombardier maintained what it describes as a healthy liquidity position, closing the second quarter of 2019 with $3 billion of cash on hand. Consolidated free cash flow usage for 2019 is now expected to be approximately $500 million, which, according to Bombardier, reflects the additional investments, costs and timing of project delivery milestones in its Transportation segment.