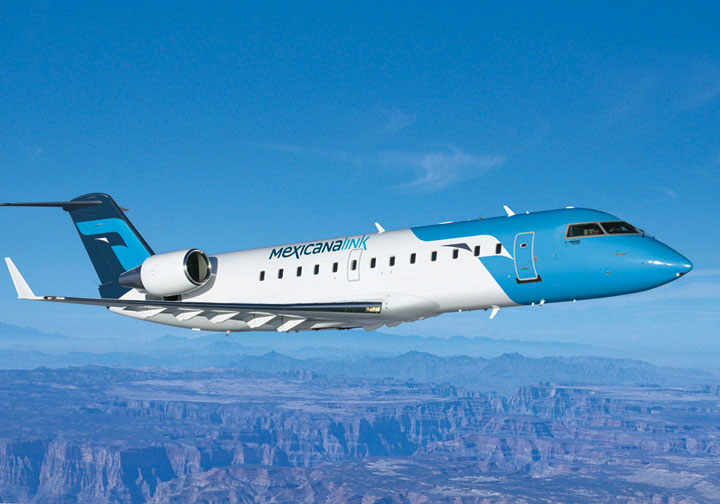 An inauguration ceremony and press conference, hosted by Grupo Mexicana at their facilities in Guadalajara, was attended by Mexican President, Felipe Calderon, as well as many other local dignitaries and guests. Gaston Azcárraga, Chairman of the Board and Manuel Borja, Chief Executive Officer of Grupo Mexicana, along with Rod Sheridan, Vice President, Asset Management and Fernando Rodriguez, Sales Director (The Americas) of Bombardier Commercial Aircraft were also present. One of MexicanaLink's recently acquired previously owned CRJ200 aircraft was on static display and many guests took the opportunity to tour it.

"The excellent economics of the CRJ200 regional jet are well suited to our operations, and we will fly the aircraft on routes which are complimentary to Mexicana's and MexicanaClick's which use larger jets," said Ricardo Baston, Executive Vice President, Corporate Planning and Fleet Transactions, Grupo Mexicana.

"Bombardier is delighted that Grupo Mexicana and MexicanaLink have joined the more than 50 operators around the world which fly our CRJ aircraft family," said Mr. Sheridan. "The CRJ Series aircraft was instrumental in revolutionizing the regional networks in North America, and we are confident that they will also be very successful in Central and South America."

During the ceremony, guests were apprised of Bombardier's Mexico operations which began in May 2006. Currently, approximately 1,050 employees work at Bombardier's facilities located at the Queretaro Aerospace Park and at El Marques Industrial Park, in Queretaro where they manufacture electrical harnesses and structural aircraft components, including the mid-fuselage for the Challenger 850 business jet, the flight control work package for the Q400 airliner, and the aft fuselage for the Global family of aircraft.