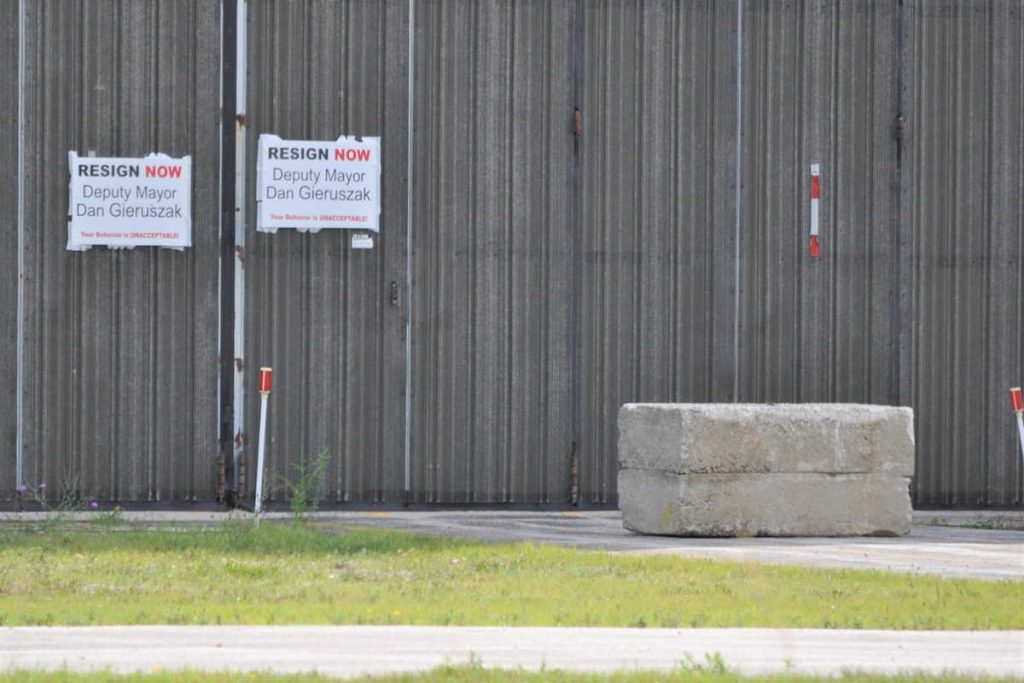 Several Brockton councillors have asked for the removal of a concrete block preventing access to the hangar of a local pilot at Saugeen Municipal Airport. (Photo: Pauline Kerr, Local Journalism Initiative Reporter, The Walkerton Herald Times)

BROCKTON – Coun. James Lang raised an issue at the Aug. 10 meeting that left some of his fellow councillors clearly feeling uncomfortable.

He asked that the matter of a recent court decision involving the Saugeen Municipal Airport be discussed in open session, not closed, and asked council’s representative on the airport commission, Deputy Mayor Dan Gieruszak, to provide an update and outline a path forward.

Lang acknowledged the matter has legal implications, meaning discussion would have to be done with care. However, he’s been hearing about it from the community, as have other council members. Of particular concern is the continued presence of a concrete block preventing access to the hangar of a local pilot, which Lang described as “embarrassing.”

Gieruszak said the prosecutor has made no decision on whether there’ll be an appeal, following the court ruling “in favour of the pilot.”

The timing of whether or not there’ll be an appeal is unknown; Gieruszak said the prosecutor went on vacation shortly after the court case.

Gieruszak said the concrete block was present because of non-payment of fees. He acknowledged a cheque did arrive a few days after fees were due. The airport commission chair also spoke of a new access agreement.

Lang said the concrete block is “a tough one to explain,” and went on to speak of “burying the hatchet” on this unfortunate episode.

Gieruszak said he hopes that will happen.

“We want to move ahead with this individual; it’s what we’ve wanted since day one,” he said.

Lang suggested removing the block – the sooner, the better – “as a sign of positivity” and further suggested council send a letter to the airport commission with that request.

When asked by Lang why the block was there, Gieruszak declined to answer.

“I want it removed,” he said, referring to the concrete block. “It’s embarrassing.”

Adams said now that the court case is over, “we need a solution and move forward in a positive way.”

Gieruszak said, “I can take that back to the commission.”

Coun. Tim Elphick noted some confusion over the access agreement, and added, “Where we’ve been hasn’t been great for the municipality.” He, too, was in favour of something from council being taken back to the airport commission.

Elphick said in subsequent discussion he’d be willing to put the request in the form of a motion, but said Gieruszak had committed to taking the matter to the airport commission.

Speaking against council intervening in the matter was Coun. Dean Liefso, who said the airport commission was an independent entity, and council would be “overstepping our boundaries.” Brockton is only one of three municipalities with representatives on the commission.

Gieruszak asked for a copy of the draft minutes from the meeting, to use at the next meeting of the airport commission. That meeting was scheduled for Aug. 18. Information on that meeting was not available as of press time.

Mayor Chris Peabody reiterated what he’s been saying since February – he wants the block removed. He also has said he wants the fees paid.

Note: The court case in question was about pilot Phil Englishman. Justice of the Peace J. J. Ziegler announced his findings July 15 in the matter of the local pilot, charged with trespassing at Saugeen Municipal Airport on Aug. 29, 2019. In all matters, his findings were in favour of Englishman. See coverage in the July 22 issue of the Walkerton Herald-Times.