Features Aircraft manufacturers
‘No Dash. No Deal’: Striking De Havilland workers rally to get aircraft made in GTA 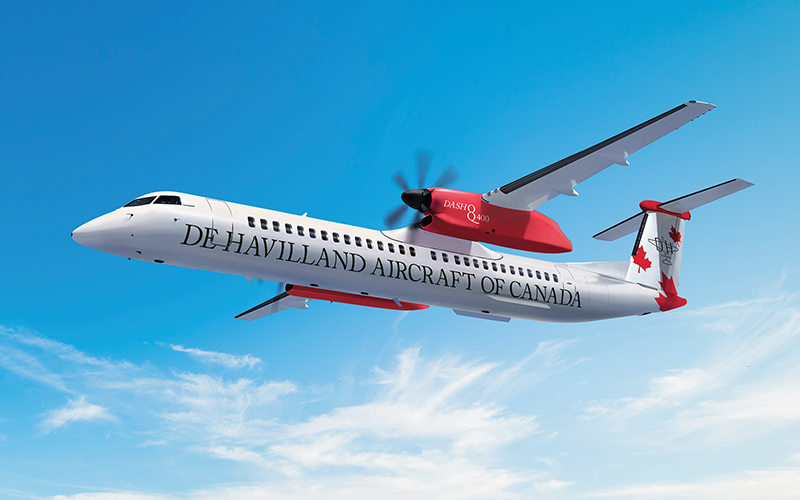 As striking workers rallied outside the Downsview plant, Unifor’s national president called on de Havilland Canada and its parent company Longview Aviation Capital Corp. to return to the bargaining table with an agreement that is fair to staff and vowed that he will keep fighting for employee rights.

“This plant is a part of who we all are because I was hired here with 1,500 other people for the Dash 7 program,” said Dias, who in 1987 was president of one of the local units representing the workers he spoke to and whose father held the position before him.

“This is personal because you trusted me … and I’ll be damned if I am going to let you down today.”

Dias was pledging his support to 700 workers represented by Unifor Local 673 and 112, who have been on strike since July 27 over the future location of the Dash 8 turboprop program.

De Havilland told workers earlier this year that it would no longer produce new Q400 aircraft at the Downsview facility beyond currently confirmed orders, and said two years ago that work will end at the site once lease agreements for the land expire.

The union has since been pushing de Havilland to commit to making the Dash 8 somewhere in the Greater Toronto Area when production resumes.

The company has refused to negotiate any scope clauses that would limit production to somewhere in the GTA and Dias has said he expects it to be moved to Alberta.

De Havilland did not immediately respond to a request for comment about the rally, behind which Ontario Premier Doug Ford threw his support during a visit to an Alstom facility in Thunder Bay, Ont.

Ford said he is disappointed that the Dash 8 program may leave because the provincial government has spent hundreds of millions on de Havilland and aircraft production.

“All of a sudden this big billionaire comes along and says, ‘I’m taking (Dash 8 production) out of Toronto, and taking it out of Ontario, and we’re shipping it to another province just because the billionaire lives in that province,” said Ford in a reference to de Havilland owner Sherry Brydson, a member of the Thomson family.

“They take the money and then they leave. I think it’s disgusting. We have to fight.”

Earlier in the bargaining process, de Havilland said it was “eager to collaborate” with the union “as we chart a sustainable long-term future for aircraft manufacturing and the skilled employment it supports. But the ability to work together toward a long-term future relies on a concerted effort to transform the business to the circumstances we are facing.”

The aviation industry has been hit hard by the COVID-19 pandemic.

As people try to avoid contracting the virus, many are forgoing travelling. Airlines were forced to ground planes for much of last year and early this year, when COVID-19 case counts were high.

It has had a trickle-down effect on sales for aircraft manufacturers like De Havilland.

“When it comes to pinching the nerve that connects their wallet to their brain, we are not in a good situation,” Dias said.

The stakes are high for the company’s workers, who want to hold onto their jobs and chanted “No Dash, no deal” during the rally.

“I am struggling to look after my family without a paycheque. I don’t have the benefits of a second income,” said Donna Day, a single mother, who has worked at the plant for 35 years.

“To have jobs ripped out form underneath you is devastating and many of us have had to visit food banks for the first time. Many of us are depressed and struggling not knowing if we will be back at our jobs one day.”

Connie Wright, who has worked at the plant for more than 36 years, is equally impassioned.

She took the stage after Day, her voice wavering as she described the plant as her “home.”

“Every time I fly up the 400 (highway) and see those Dash 8’s, I know a little part of me is in that aircraft,” she said, noting she even wrote her name between the skins of some planes on the last of the 300 series.

“Every single aircraft that I have worked on has my blood, sweat and tears from this job…but we need Longview to get back to the table.”