News
Building on its diversity 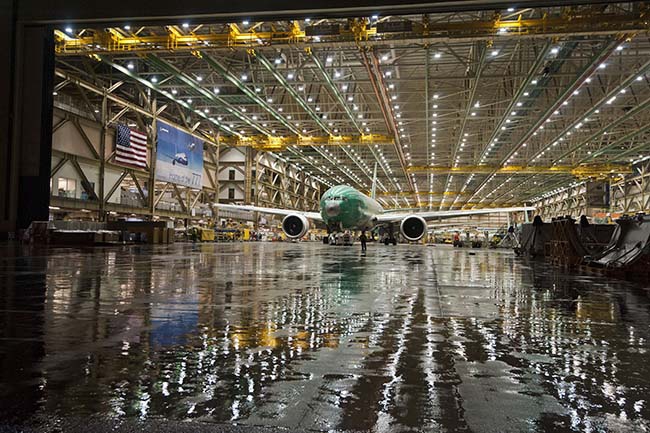 Héroux-Devtek will replace United Technologies as the main landing gear provider for the 777 beginning in 2017. Héroux-Devtek (HD) completed the final assembly of the preproduction shipset for the Boeing 777 landing gear

With the contract, the largest in HD’s history, which required the hiring of about 100 new employees, the company will replace United Technologies as the main landing gear provider for the 777 beginning in 2017. It also makes HD the third-largest landing gear manufacturer in the world.

“Finalizing the pre-production shipset for the Boeing 777 landing gear is a major step forward for Héroux-Devtek, as it clearly demonstrates our world-class capabilities in manufacturing large-scale, complete landing gear systems,” said company president and CEO Gilles Labbé, one of the original two executives who purchased the company from Bombardier in 1985 in a management buyout. He still owns about 10 per cent of the company. “We are also very pleased to progress as per our planned schedule. The 777 has been a longstanding strategic program for Héroux-Devtek and continued success in executing the largest landing gear contract in our history will further strengthen the business relationship between the two organizations.”

HD began discussions with Boeing back in 2012 about becoming a major supplier to the American plane maker, which was looking for another option to break the landing gear duopoly controlled by Messier-Dowty and United Technologies, explained Labbé.

“Boeing wanted to create more competition, because the market is really growing and they wanted another supplier which allows them to lower their costs,” he said. “They have a program called Partnership for Success and if you want to do business with them, you have to sharpen your pencil. Eventually, I expect Boeing to become our number one customer.”

While the market for commercial aircraft may not be growing exponentially, Boeing has close to 1,900 orders for the 777 and a backlog of more than 500 aircraft as of mid-2016. And the worldwide fleet for all commercial aircraft is expected to double to 43,560 from 21,600 over the next 20 years and HD hopes to go along for the ride.

To prepare for the Boeing contract, HD invested a total of $105 million at its various facilities, including a new 110,000 square foot plant in Cambridge to manufacture large-scale, complex landing gear components. The site can be expanded to 200,000 sq. ft. if necessary.

Its Cleveland, Ohio plant has doubled capacity to 100,000 sq. ft., for components finishing and sub-assembly work, while its Laval and Longueuil facilities which make small to medium-size landing gear parts and perform surface treatment and integration of landing gear respectively, also received funding for building and equipment upgrades.

Starting in calendar 2018, Boeing will lower the legacy 777 production rate to 5.5 per month from seven a month in 2017 and begin phasing in production of the new 777X.

“However, Boeing is currently only 60 per cent sold for 2018, so it will need to win new orders. This is a key risk for Héroux-Devtek, but we believe that the company can offset a potential lower 777 rate with new contracts. We also would expect a return to higher rates as the 777X ramps up early next decade,” said analyst Cameron Doerksen at National Bank Financial. Management still expects fiscal 2017 sales to be $420 million, versus $406 million in fiscal 2016 (up 11.5 per cent from 2015), reaching $500 million by fiscal 2019 as 777 production ramps up in 2018.

HD did not announce any big news in Farnborough, but Doerksen met with management at the show and he continues to be highly positive about the company’s growth prospects. “Specifically, the company is currently bidding on new build-to-print work that could boost revenue growth in the mid-term,” he said. “Longer term, we believe that HD would be well positioned to bid on the complete landing gear on Boeing’s proposed middle-of-market aircraft should it move forward. It will also likely see some new business stemming from Canada’s new fighter jet competition, regardless of which aircraft wins the competition. Finally, it appears to be more active in seeking out new acquisition opportunities, which would accelerate growth for the company.”

On the military side, HD hopes it won’t be punished by Lockheed Martin if Ottawa decides not to purchase the F-35 fighter jets. It produces door uplock systems for the fighter at its facility in Laval and at a joint-venture facility in Turkey. Lockheed stated in June that if the federal government opted for another aircraft, over $825 million worth of industrial contracts would be transferred to other countries, presumably those who have already ordered F-35s, including the U.S., U.K., Italy, Turkey and the Netherlands among others.

Héroux-Devtek will replace United Technologies as the main landing gear provider for the 777 beginning in 2017.

In July, the Trudeau government announced it was consulting with the industry and certain countries about possible fighters to replace the aging CF-18s. During the election campaign, the Liberals vowed it wouldn’t buy the F-35 at least until the bidding was opened to all manufacturers.

HD must step lightly since four of the five potential contenders in line for lucrative government contracts are also their clients, namely Lockheed Martin, Saab, Dassault and Boeing.

With the acquisition of APPH of the U.K. in 2014, HD now employs some 1,400 workers in 14 facilities in the U.K., Canada and the U.S., including two landing gear design and engineering facilities in St. Hubert, Que. and Runcorn, U.K. And it has plenty of programs in the pipeline, according to Labbé.

The company is also trying to produce more of its own products rather than to be a simple manufacturer of components for other companies. It is currently developing landing gear for the AgustaWestland 609 TiltRotor aircraft, the South Korean KF-X fighter, the Swedish Gripen E fighter and the Sikorsky CH-53K helicopter.

The company is almost evenly split between commercial (51 per cent) and military (49 per cent) mandates. In terms of propriety products, which accounts for about 34 per cent of its revenue, it has been mandated by Leonardo-Finmeccanica to design, develop, assemble and test complete landing gear systems for the AW609 TiltRotor aircraft, the only commercial tiltrotor program in development. In addition, it has a Memorandum of Agreement with Hanwha Corp. to jointly design and develop the landing gear system for the KF-X fighter, enabling HD to expand its geographical reach into Asia.

In terms of proprietary projects in progress, the Sikorsky CH-53K completed its first flight in October 2015, the Saab Gripen E had its factory roll-out in May, while the Embraer Legacy 450-500 production ramp-up is progressing.

HD is also active in the aftermarket, which accounts for roughly 32 per cent of its business. It has increased the scope of its strategic alliance for maintenance services to operators of the Saab 340 and 2000 aircraft and has renewed an important USAF contract for landing gear repair and overhaul for the C-130, E-3 and KC-135R refuelling aircraft. The contract, renewed through September 2021, includes the provision of certain spare parts.

In terms of market trends, Labbé says the defence sector remains somewhat uncertain due to budget constraints, particularly in the U.S. While a budget agreement provides additional funding for U.S. defence spending for the next two years, nothing is certain beyond that point.

On the plus side, HD has a very diversified defence portfolio with a good balance between new component manufacturing and aftermarket products and services. On the commercial side, both the civilian helicopter and business jet markets are proving to be challenging, according to Labbé.

“As we grow, we will either need to build a factory or enter into a joint-venture in a low-cost country,” he added. “That is the nature of the game today.”

But for now, HD seems to have its plate full with a diversified portfolio of both clients and projects, although there is always room for more work, said Labbé. “Even with all our projects, we are still not working at 100 per cent capacity.”