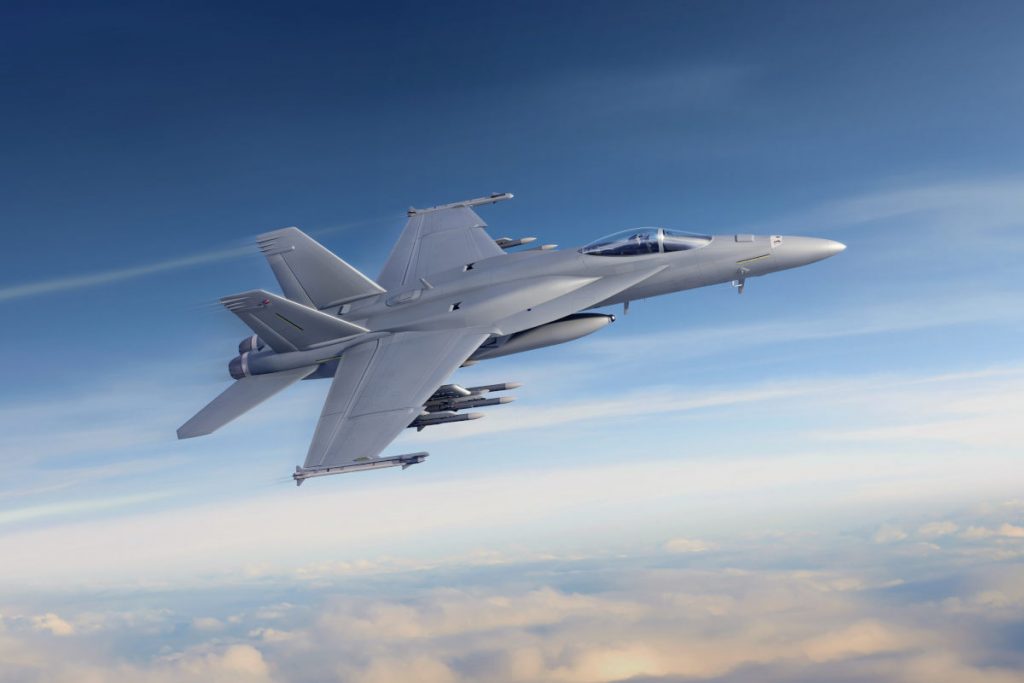 The first Block III Super Hornets will be delivered to the U.S. Navy in 2020. (Photo: Boeing)

OTTAWA — Canada has officially narrowed its decade-long hunt for a new fighter jet to two choices as the federal government confirmed U.S. aerospace giant Boeing’s Super Hornet is out of the running to replace the military’s aging CF-18s.

The announcement from Public Services and Procurement Canada came nearly a week after The Canadian Press reported the surprise news that Boeing had been told its bid for the $19-billion contract did not meet Ottawa’s requirements.

The Liberal government refused to comment publicly at that time, and there was uncertainty around whether the U.S. aerospace giant had been dropped from the competition to provide Canada with 88 new fighter jets.

But the federal procurement department confirmed in a statement Wednesday that Lockheed Martin’s F-35 stealth fighter and the Swedish Saab Gripen are the only two aircraft still in contention.

While the statement did not say why Boeing’s offer did not make the cut, the fact that one of the two U.S. companies competing for the contract failed to make the final shortlist represents a major turn of events.

Following the government’s announcement, Boeing issued its own statement saying it was “disappointed and deeply concerned” that its Super Hornet had not made it to the next phase of the competition.

“We are working with the U.S. and Canadian governments to better understand the decision and looking for the earliest date to request a debrief to then determine our path forward,” the company said.

Many observers had seen the Super Hornet and F-35 as the only real competition because of Canada’s close relationship with the United States, which includes using fighter jets together to defend North American air space on a daily basis.

Those perceptions were only amplified after two other European companies dropped out of the competition before it even started, complaining the government’s requirements had stacked the deck in favour of their U.S. rivals.

In particular, both Airbus and Dassault had complained about what they saw as onerous requirements associated with adapting their aircraft — the Eurofighter and Rafale, respectively — to meet Canada’s intelligence-sharing requirements.

Those requirements included ensuring their aircraft could integrate with the top-secret Canada-U.S. intelligence network known as “Two Eyes,” which is used to defend North America.

Sweden is not a member of NATO or Norad, the joint Canadian-American defence command responsible for protecting the continent from foreign threats. That had prompted questions about the Gripen’s compatibility with U.S. aircraft.

Airbus, which dropped out of the running in August 2019, also expressed frustration over the government’s decision to change a long-standing policy that requires bidders on military contracts to legally commit to invest in Canada.

Both Lockheed Martin and Saab said Wednesday that they looked forward to working with the government during the final stretch of the competition.

“Together with our industry partners, we look forward to continuing to support the government in the competitive process,” Lockheed Martin Canada chief executive officer Lorraine Ben said in a statement.

Exactly what happens next wasn’t immediately clear on Wednesday, with the procurement department saying it will “finalize next steps” in the coming weeks.

However, the department did indicate those steps could involve final negotiations with the top bidder or “entering into a competitive dialogue, whereby the two remaining bidders would be provided with an opportunity to improve their proposals.”

The government is still hoping to award a final contract next year, it added, with the first new aircraft delivered in 2025.

The fact two aircraft remain in the running at this stage suggests some type of final negotiation or discussion will occur in which Lockheed Martin and Saab will be able to sweeten their bids, said defence analyst Timothy Choi of the North American and Arctic Defence and Security Network

“It suggests that neither current proposal is sufficiently superior to the other, and they are preparing the teams — and us observers — to expect that additional stage where both teams will spend more time improving their offers,” he said.

“This, of course, will require the (government) to re-review these new proposals, which will require further time.”

There have been long-standing concerns in some corners that the entire competition has been set up from the beginning to select the F-35, which is being purchased by many of Canada’s closest allies.

Canada joined the U.S. and other allies as a partner in developing the F-35 in 1997 and has paid US$613 million to stay at the table. Partners get a discount on the jets and can compete for billions of dollars in work building and maintaining them.

But David Perry, vice-president of the Canadian Global Affairs Institute, noted the terms of the competition meant Lockheed Martin’s bid started at a disadvantage because the company cannot guarantee money spent on the F-35 would be reinvested in Canada.

The Liberals promised in 2015 not to buy the F-35, but to instead launch an open competition to replace the CF-18s. They later planned to buy 18 Super Hornets without a competition as an “interim” measure to ensure Canada had enough aircraft until permanent replacements arrived.

But the government cancelled the plan after Boeing launched a trade dispute with Montreal aerospace firm Bombardier over the latter’s C-Series planes. It launched the current bidding process in July 2019, at which point both the Super Hornet and F-35 were allowed to compete.

Meanwhile, the government has been forced to invest hundreds of millions of additional dollars into the CF-18 fleet to keep it flying until a replacement can be delivered. The last new plane isn’t scheduled to arrive until 2032, at which point the CF-18s will have been around for 50 years.