The 50-year aviation career of Leland Snow, the man many call “the father of the modern crop dusting aircraft”, or aerial application aircraft, was celebrated Sat. April 5 , 2008.

The 50-year aviation career of Leland Snow, the man many call “the
father of the modern crop dusting aircraft”, or aerial application
aircraft, was celebrated Sat. April 5 , 2008 by Air Tractor employees, dealers, vendors, Olney residents and elected dignitaries in a day of festivities hosted at the company's Olney, Texas manufacturing facility.  The occasion honored not just the man, his career and innovations, but also the many people who, through the years, helped Leland Snow make his vision, literally, take flight. 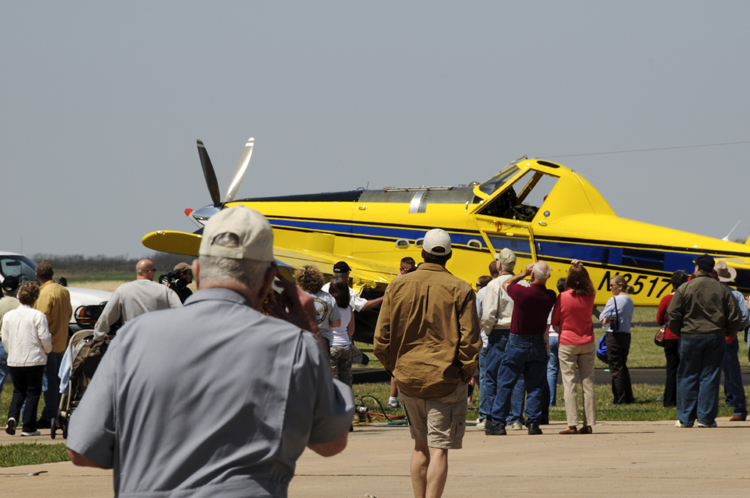 Beginning at 1:00 p.m., an aerobatic demonstration held celebration guests looking skyward as top aerobatic aircraft pilots performed thrilling aerial maneuvers.  At 2:30 p.m. an open house and tour of the Air Tractor manufacturing facilities offered guests a glimpse of the processes involved in building the world's most advanced agricultural aircraft.  A presentation ceremony followed at 4:30 p.m. providing attendees a brief look back at the history of Air Tractor and the role that Snow's many innovations and accomplishments played in the development of modern aerial application aircraft.  In addition to honoring Leland Snow, two Air Tractor manufacturing buildings were renamed and dedicated in memory of long-time Air Tractor employees Jim Schmidt and Sam Cooke.  A dinner for around 700 guests, followed by a dance and spectacular fireworks display concluded the day of festivities.

Leland Snow began designing his first ag airplane, the S-1, in 1951.  The 23-year old Snow completed test flights with the S-1 in 1953.  Snow’s S-1 flew dusting and spraying jobs in the Texas Rio Grande Valley and in Nicaragua until 1957.  He followed-up the S-1 with the models S-2A and S-2B, which were built when Snow moved to production facilities in Olney, Texas in 1958.

In 1965, Snow sold his company to Rockwell-Standard and was appointed a Vice President of the Aero Commander division.  During this time, the Model S-2R was developed and named the Thrush.  The first 100 Thrush aircraft were built at the Olney Division before the plant was closed and Thrush production moved to Georgia in 1970.  More than 500 aircraft were produced under Snow Aeronautical Corporation and Rockwell-Standard in Olney.

Snow resigned from Rockwell and devoted the next two years designing the Air Tractor.  Construction began in 1972 on the AT-300, which later became the AT-301.  Air Tractor’s first turbine model, the AT-302, was introduced in 1977.

In 1997, the 2,000th Snow-designed, Olney-built aircraft rolled out the factory doors, and the company hosted a 40th Anniversary celebration in March of 1998.  In 2002, the first of many highly-modified and armored AT-802s was delivered to the United States Department of State for use in narcotic crop eradication in Colombia.  In 2004 the 2000th Air Tractor, an AT-502B, was delivered to a Nebraska operator.