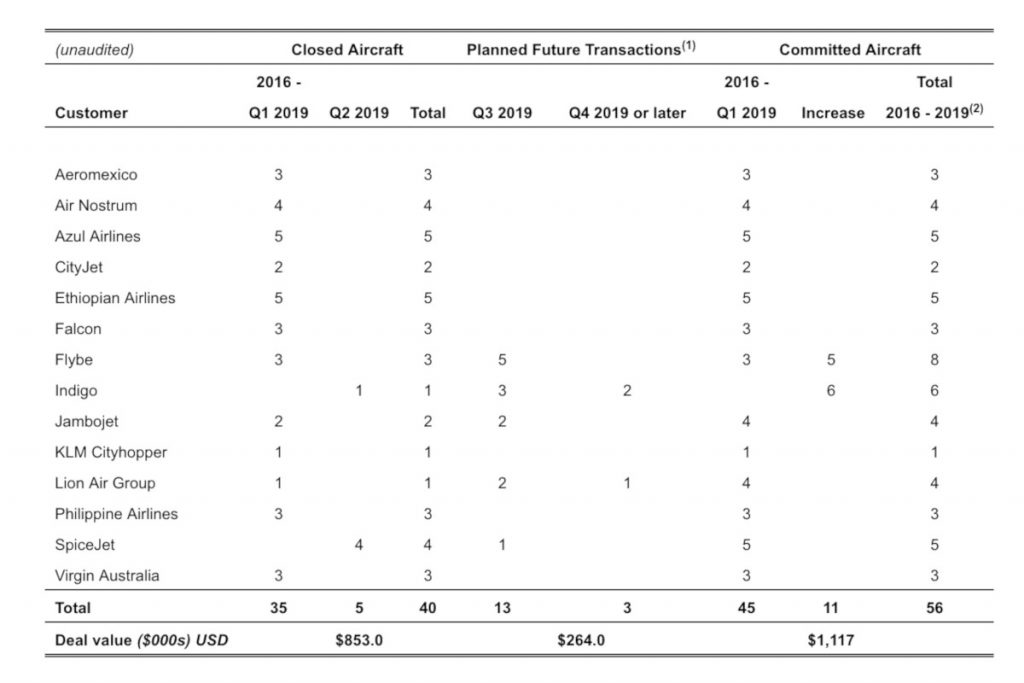 Chorus Aviation Inc. today published its second quarter 2019 financial results with a net income of $38.9 million, an increase of $22.6 million relative to the corresponding period of 2018, which includes an unrealized foreign exchange gain of $16.1 million. Adjusted net income for the quarter, however, came in at $24.7 million, representing a decrease of $4.9 million or 16.5 per cent relative to the second quarter of 2018.

Chorus’ Regional Aircraft Leasing fleet commitments grew to 56 aircraft valued at US$1.1 billion (based on agreed lease rates) with future contracted leasing revenue of approximately US$815.0 million. “I’m immensely pleased with our performance in the second quarter and particularly with the traction we’re gaining in the regional aircraft leasing space, having announced commitments on 11 additional aircraft in the period,” said Joe Randell, president and CEO, Chorus.

The company’s leasing arm, Chorus Aviation Capital, was launched in early 2017. Among its portfolio of 56 aircraft,13 are expected to be delivered in the third quarter and two in the fourth quarter, with the remaining aircraft by the end of 2020. When combined with the aircraft lease commitments under the recently Capacity Purchase Agreement involving Air Canada, Randell explains the company’s fleet of leased aircraft reaches a value of over US$2.0 billion with US$2.0 billion in future contracted lease revenue.

“We had earlier communicated our intention to commit our leasing growth capital by early 2020 and I am pleased to report we have delivered on this milestone almost a full year in advance – a strong indicator of the opportunities that exist in this sector,” said Randell. “Since the launch of the business, we have grown the regional aircraft leasing segment by an average of approximately 20 aircraft per year.”

Looking at the first six months of its fiscal year, Chorus reported adjusted EBITDA of $160.4 million, a decrease of $1.2 million over the 2018 period. The Regional Aviation Leasing segment’s adjusted EBITDA increased by $16.9 million, again due to the growth in aircraft earning leasing revenue.

Year-to-date adjusted net income was $43.7 million, a decrease from 2018 of $12.5 million or 22.2 per cent, which the company states is due to the $1.2 million decrease in adjusted EBITDA previously described, as well as depreciation, interest and tax costs, and foreign exchange losses. Year-to-date net income was $72.4 million, an increase of $50.8 million over the 2018 period, which again primarily relates to gains in unrealized foreign exchange gains on long-term debt.