Delta Air Lines Inc. and Northwest Airlines Corp. have announced an agreement in which the two carriers will combine in an all-stock transaction with a combined enterprise value of US$17.7 billion. 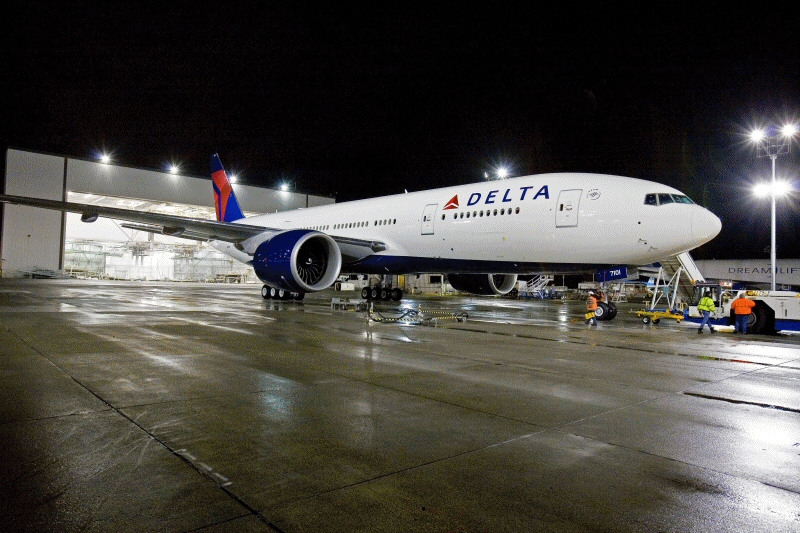 April 14, 2008, Atlanta, GA and Eagan, MN – Delta Air
Lines Inc. and Northwest Airlines Corporation today announced an agreement in which the two carriers will combine in
an all-stock transaction with a combined enterprise value of $17.7
billion.

The new airline,
which will be called Delta, will provide employees with greater job
security, an equity stake in the combined airline, and a more stable
platform for future growth in the face of significant economic
pressures from rising fuel costs and intense competition. Small
communities throughout the United States will enjoy enhanced access to
more destinations worldwide.

Customers also will benefit from the
combined carriers' complementary route networks, which together will
offer people greater choice, competitive fares and a superior travel
experience to more cities than any other airline. In addition,
combining Delta and Northwest will create a global U.S. flag carrier
strongly positioned to compete with foreign airlines that are
continuing to increase service to the United States.
Delta CEO Richard Anderson will be chief executive officer of the
combined company.

Delta Chairman of the Board Daniel Carp will become
chairman of the new Board of Directors and Northwest Chairman Roy
Bostock will become vice chairman. Ed Bastian will be president and
chief financial officer. The Board of Directors will be made up of 13
members, seven of whom will come from Delta's board, including
Anderson, and five of whom will come from Northwest's board, including
Bostock and Doug Steenland, the current Northwest CEO. One director
will come from the Air Line Pilots Association (ALPA).

Combined, the company and its regional partners will provide access
to more than 390 destinations in 67 countries. Delta and Northwest,
together, will have more than $35 billion in aggregate annual revenues,
operate a mainline fleet of nearly 800 aircraft and employ
approximately 75,000 people worldwide.

In an industry where the U.S. network carriers have shed more than
150,000 jobs and lost more than $29 billion since 2001, the combination
of Delta and Northwest creates a company with a more resilient business
model that is better able to withstand volatile fuel prices than either
can on a standalone basis. Merging Delta and Northwest is the most
effective way to offset higher fuel prices and improve efficiencies,
increase international presence and fund long-term investment in the
business.

The transaction is expected to generate more than $1 billion in
annual revenue and cost synergies from more effective aircraft
utilization, a more comprehensive and diversified route system and cost
synergies from reduced overhead and improved operational efficiency.
The company expects to incur one-time cash costs to not exceed $1
billion to integrate the two airlines. The combined company will have a
stronger, more durable financial base and one of the strongest balance
sheets in the industry, with expected liquidity of nearly $7 billion at
closing.

Richard Anderson, Delta CEO, stated: "We said we would only enter
into a consolidation transaction if it was right for all of our
constituencies; Delta and Northwest are a perfect fit. Today, we're
announcing a transaction that is about addition, not subtraction, and
combines end-to-end networks that open a world of opportunities for our
customers and employees. We believe by partnering with our employees,
including providing equity to U.S.-based employees of Delta and
Northwest, this combination is off to the right start. Together, we are
creating America's leading airline — an airline that is financially
secure, able to invest in our employees and our customers, and built to
thrive in an increasingly competitive marketplace."

Doug Steenland, Northwest CEO, said: "Today's announcement is
exciting for Northwest and its employees. The new carrier will offer
superior route diversity across the U.S., Latin America, Europe and
Asia and will be better able to overcome the industry's boom-and-bust
cycles. The airline will also be better able to match the right planes
with the right routes, making transportation more efficient across our
entire network. In short, combining the Northwest and Delta networks
will allow the strengthened airline to realize its full global
potential and invest in its future."

The Delta and Northwest merger will offer customers and communities
direct service between the United States and the world's major business
centers. Specific benefits include:

* Customers will be able to fly to more destinations, have mores schedule options and more opportunities to earn and redeem frequent flyer miles in what will become the world's largest frequent flyer program.

* The merged airline will maintain all hubs at Atlanta, Cincinnati, Detroit, Memphis, Minneapolis/St. Paul, New York-JFK, Salt Lake City, Amsterdam and Tokyo-Narita — each of which will benefit from improved global connectivity.

* Both airlines' customers will benefit from a strengthened SkyTeam alliance that more closely aligns the combined airline with its respective trans-Atlantic partners Air France and KLM.

Customers also will benefit from the combined carrier's financial
stability. The merger creates one of the strongest balance sheets among
major U.S. airlines, permitting the combined airline to invest in its
fleet and services to enhance the customer experience. For instance:

* The combination will accelerate the upgrading of existing international aircraft with lie-flat seats and personal on-demand entertainment.

* The combined company will have the opportunity to exercise options
for delivery of up to 20 widebody jets between 2010 and 2013 to
provide more international service than ever before.

This combination will expand Delta's international and domestic
reach, and there will be no reductions in the number of hubs. In
addition, building on both airlines' proud, decades-long history of
serving small communities, Delta will improve worldwide connections to
small towns and cities across the U.S., enhancing their access to the
global marketplace. Following the merger, Delta will serve more than
140 small communities in the United States — more than any other
airline.

"Delta and Northwest are an excellent strategic fit, with
complementary and geographically distinct route systems," said Edward
Bastian, Delta president and chief financial officer. "Together, we
will have a more robust platform for profitable international growth.
Combining both carriers' international and domestic strengths, with our
worldwide SkyTeam partners, we are well positioned to lead the industry
and deliver value to our shareholders."

Record fuel prices have fundamentally changed the economics of the
airline industry. Fuel is the highest single expense for Delta and
Northwest, significantly eroding the financial benefits of
restructuring and placing the airlines' new found strength and
stability at long-term risk. At the beginning of 2007, oil prices were
approximately $55 a barrel. Now, oil prices have nearly doubled. This
dramatic run-up in the price of oil makes the transaction even more
compelling.

Internationally, the two carriers, along with their partners at Air
France and KLM, will have a broader global network similar in scope and
depth to what other foreign flag carriers already possess — and a
significant presence in key business centers, with improved prospects
for growing corporate business globally. This presence is essential for
U.S. network carriers due to Open Skies agreements that have expanded
aviation markets around the world and have created a more competitive
international environment.

Merger combines Delta's strengths in the South, Mountain West,
Northeast, Europe and Latin America with Northwest's leading positions
in the Midwest, Canada and Asia; competition will be preserved and
enhanced as a result of complementary networks

The Delta-Northwest combination will be pro-competitive. There is
little overlap in the nonstop routes the two airlines serve, with
direct competitive service on only 12 of more than 1,000 nonstop city
pair routes currently flown by both airlines. In fact, the merger will
create a stronger, more efficient global competitor. Discount carriers,
which now carry one third of domestic passengers, and other network
airlines will remain competitors in the airline's markets.

Delta also today announced that it has reached agreement with the
company's pilot leadership to extend its existing collective bargaining
agreement through the end of 2012. The agreement, which is subject to
pilot ratification, facilitates the realization of the revenue
synergies of the combined companies once the transaction is completed.
It also provides the Delta pilots a 3.5 percent equity stake in the new
company and other enhancements to their current contract.

Delta will use its best efforts to reach a combined Delta-Northwest
pilot agreement, including resolution of pilot seniority integration,
prior to the closing of the merger.

Frontline employees of both airlines will be provided seniority
protection through a fair and equitable seniority integration process,
as the airlines are combined. In addition, U.S.-based non-pilot
employees of both companies will be provided a 4 percent equity stake
in the new airline upon closing. The company also expects no
involuntary furloughs of frontline employees as a result of this
transaction and the existing pension plans for both companies'
employees will be protected. Additionally, all Delta and Northwest
employees will enjoy reciprocal pass privileges on both airlines,
beginning as soon as possible during the regulatory review process.

"We are pleased that the people of Delta and Northwest will
participate directly in the growth and future success of the combined
company," Anderson said. "Thanks to the hard work and professionalism
of the more than 75,000 Delta and Northwest employees over the last few
years, our new, combined company will be positioned for a bright future
as a leader in the global airline industry."

Delta and Northwest's complementary networks and common membership
in the SkyTeam alliance will ease the integration risk that has
complicated some airline mergers. The carriers participate in a joint
SkyTeam frequent flyer program with common customer lounges and airline
partner networks. In addition, they share a common IT platform, which
has already been partially integrated through the existing alliance
between Delta and Northwest. Further, the combination of Delta and
Northwest will enable an accelerated joint venture integration with Air
France/KLM, creating the industry's leading alliance network.

Over the course of the regulatory process, a detailed integration
plan will be created by the transition committee made up of leaders
from both companies. After closing of the merger, the consolidation of
overlapping corporate and administrative functions will result in some
job reductions or company-paid transfers. Involuntary reductions for
management and administrative employees will be minimized by normal
attrition.