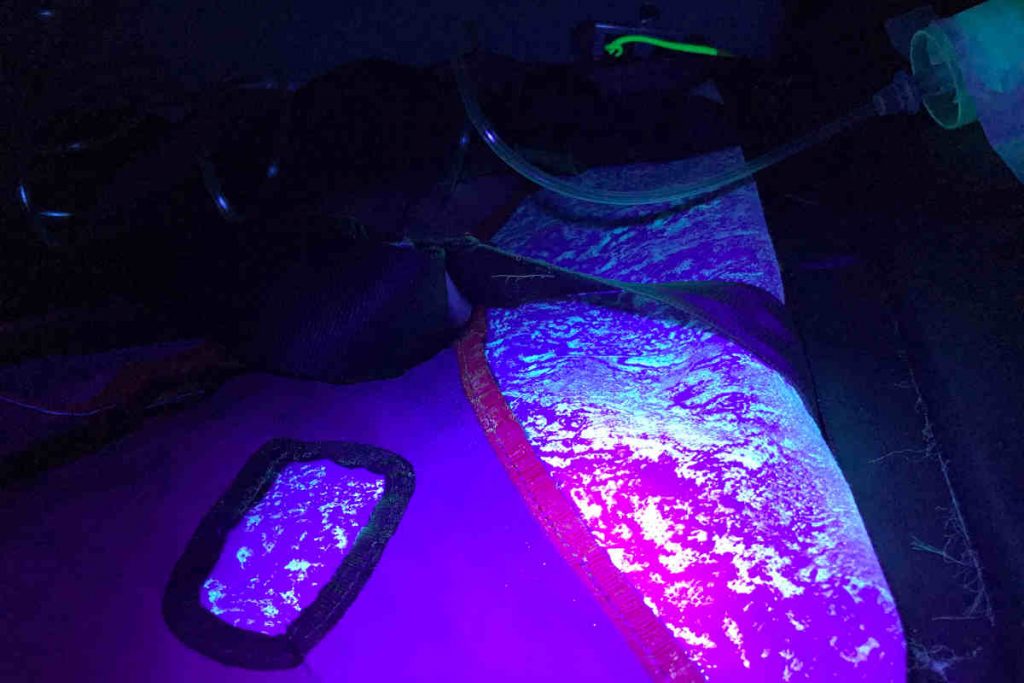 DRF Luftrettung conducted a total of 16 test runs on board an H145 and EC135, which included methods to show how infectious droplets can settle on the surface cabin. (Photo: DRF Luftrettung)

DRF Luftrettung has released results from what it describes as a scientifically accompanied field test to determine the potential risk from released droplets by infectious patients for a helicopter crew; and do pathogens spread from the cabin into the cockpit. The field test began back in the autumn of 2019, before the arrival of COVID-19, to consider a range of risk scenarios in transporting patients with highly infectious diseases like influenza, tuberculosis or meningococcus, which the company states are also becoming more prominent in its missions.

DRF Luftrettung is part of DRF Group, which is headquartered in Filderstadt, Germany, as one of the largest air rescue organizations in Europe. In 2019, the group carried out a total of 40,738 missions. The crews at 13 of the 35 HEMS bases in Germany, Austria and Liechtenstein are on standby 24/7, and eight locations provide helicopters with rescue winches. DRF Luftrettung carried out the aerosol-distribution testing in cooperation with the German consulting centre for hospital epidemiology and infection control (BZH) in Freiburg.

DRF Luftrettung states findings from this study, officially called Aerosol-distribution in the cabin and cockpit of an ambulance helicopter (Schulz-Stübner S, Henker J, Braun K. Kosa), will enable initial conclusions about transmission pathways to be drawn, which its hygiene management team can use to build on.

Within the scope of the aerosol-distribution project, a total of 16 test runs were performed on board the H145 and the EC135, 11 of which were on the ground and five in the air. Two scenarios were essentially depicted, and diversified within the course of the study. One of these was a worst-case scenario, simulating a major pathogen release, and the other depicted an alternating, less extreme pathogen release.

DRF Luftrettung’s study found pathogens can easily spread from a spontaneously breathing patient in the cabin to the cockpit through aerosol distribution. (Photo: DRF Luftrettung)

An oxygen nebulizer level with the patient’s head was used to recreate the droplets being released. The test simulated a droplet release like that which would occur if the spontaneously breathing patient or person coughed or sneezed in the cabin, as well as on the basis of the (intentional or accidental) disconnection of a breathing tube. Air flows were detected by means of fluorescence, and thus also the movements of the droplets. Their spread was made visible with UV light. The tests were carried out both with and without a curtain diving cabin and cockpit in order to be able to draw conclusions about if and to what extent pathogens spread into the cockpit from the cabin.

Study results
DRF Luftrettung explains the results from the study, generally speaking, indicate that with a spontaneously breathing patient there is a risk of pathogens not only spreading in the cabin, but also in the cockpit. The probability of infection depends on various factors like the type of pathogen, the transmission pathway and the exposure time.

In the worst-case scenario (a massive emission of droplets), DRF Luftrettung explains there was a high probability of the pathogens not just settling on the surfaces in the entire cabin, but also spreading to the cockpit if there is no dividing curtain. In the presence of a curtain, the particles landed on it. During the second test, with a short droplet emission that is equivalent to a cough or brief separation from a breathing tube in real life, there were deposits around the patient but not in the cockpit.

Results from the second test, according to DRF Luftrettung, implies that the duration of droplet release determines the range and the degree of contamination. Variables such as ventilation settings for heating or air conditioning, flight direction or flight manoeuvres were also taken into consideration.

DRF Luftrettung explains these findings enable various measures to be derived regarding patient and occupational protection; and that it is crucial to clean all surfaces in the cabin after transporting a highly infectious patient, because the restricted space obviously increases the risk of contamination in comparison to a normal hospital room. Separating the cockpit and the cabin can generally also provide additional protection, continues DRF Luftrettung, and medical crews absolutely must wear personal protective equipment.

“The hygiene management team at DRF Luftrettung has set itself the goal of optimizing the already high hygiene standards in emergency medicine above and beyond the legal guidelines,” said Raimund Kosa, coordinator of hygiene management at DRF Luftrettung, who played a key role in supervising the project, with support from the BZH. “This was also where the idea for the scientifically accompanied field test came from. At the start of the study, we could not have predicted that the topic would be quite so explosive in the wake of the coronavirus pandemic, but it makes the importance of our work even clearer.”

In the course of the coronavirus pandemic, DRF Luftrettung states it has implemented extensive measures to protect its staff and patients. These include the mandatory use of personal protective equipment and the strict hygiene measures at the HEMS bases, as well as increasing training courses on hygiene for crew members.

In addition, DRF Luftrettung has procured 11 EpiShuttles. These special segregated stretchers provide optimal protection for both the patients and the crew. The company explains stations that have this equipment will also be ready for action more quickly after each operation, as the very time-consuming disinfection of helicopters after missions with highly infectious patients will no longer be necessary. The patient lies under a transparent cover and can be connected to an intensive respiratory device via air-tight access points, according to DRF Luftrettung, while being monitored and treated at the same time.

DRF Luftrettung explains, that aside from cockpit separation and the use disinfecting technologies, this scientifically accompanied field test forms the basis for its further hygiene management work at, because, until now, there has not been any procedure that is approved by aircraft manufacturers on account of avionics and the diversification of technical components.