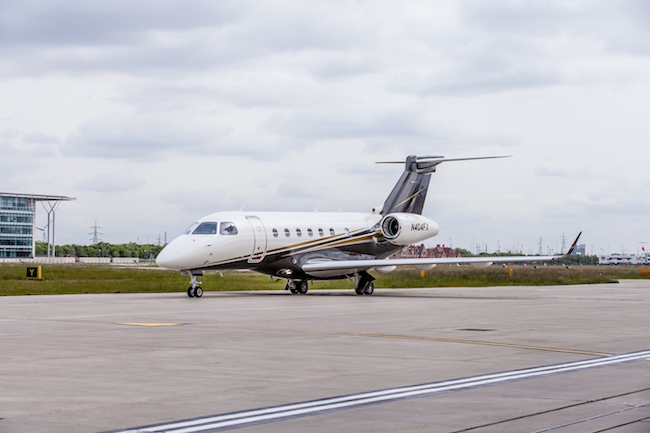 The Legacy 500 that performed this demonstration is the 1,000th business jet that Embraer recently delivered to Flexjet. This is the fourth Legacy 500 to join the Flexjet fleet and is part of a firm order for both Legacy 500 and Legacy 450 jets.

“The Legacy 500 has already proven its remarkable field performance and now is able to fly in and out of London City Airport, reaching destinations as far as Riyadh, Saudi Arabia or Gander, Canada,” said Marco Tulio Pellegrini, president and CEO, Embraer Executive Jets. “This new operational capability for London’s financial district, one of Europe’s major business aviation hubs, will offer our customers additional flexibility in the best-in-class midsize jet. I congratulate Flexjet on being the first Legacy 500 customer to operate at LCY.”

London City Airport has operated one of the most stringent noise management standards of any airport in the UK since opening in 1987. LCY’s short runway, steep approach and departure angle, as well as other operational controls, make it different from most other airports, requiring a special certification for every aircraft that operates there.

“London City Airport, with its easy access to the city’s financial districts, is an important destination for Flexjet Owners and clients who are making use of our rapidly growing international service offering,” said Flexjet Chief Executive Officer Michael Silvestro. “The Embraer Legacy 500 is an outstanding aircraft with mission-specific capabilities that make it well-suited for London City Airport.”

“We at Flexjet are committed to ensuring that our aircraft have minimal impact on the environment and the communities we serve,” said London-based Raymond Jones, Managing Director International, Flexjet. “The Embraer Legacy 500, with its light environmental footprint and ability to meet strict noise limits, is the ideal aircraft to serve London City Airport.”