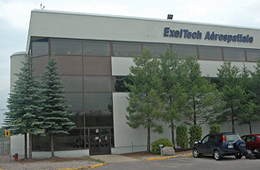 The northern regional airline will become the company's anchor
customer at its Montreal line maintenance facility. Major maintenance will be done at the Quebec City Dash 8 heavy maintenance site.

"Air Creebec and ExelTech have been growing together in the six years since we signed our first contract with them,'' David Bertrand, director general of Air Creebec, said Wednesday in a release.

''We have been very pleased with the support the ExelTech team has given us. They are clearly committed to meeting our needs, and we are therefore delighted to be expanding the scope of our relationship and renewing it for a further five years."

The contract expansion "is a testimonial to the hard work by a very dedicated maintenance, planning and logistics team,'' said Martin Laplante, ExelTech's manager of line maintenance.

Owned and funded by the Cree Development Corp., which invested proceeds from the James Bay land settlement, Air Creebec's mission is to support the development and self-sufficiency of the Cree nation by providing air transportation in the region the Cree call Eeyou Istchee.