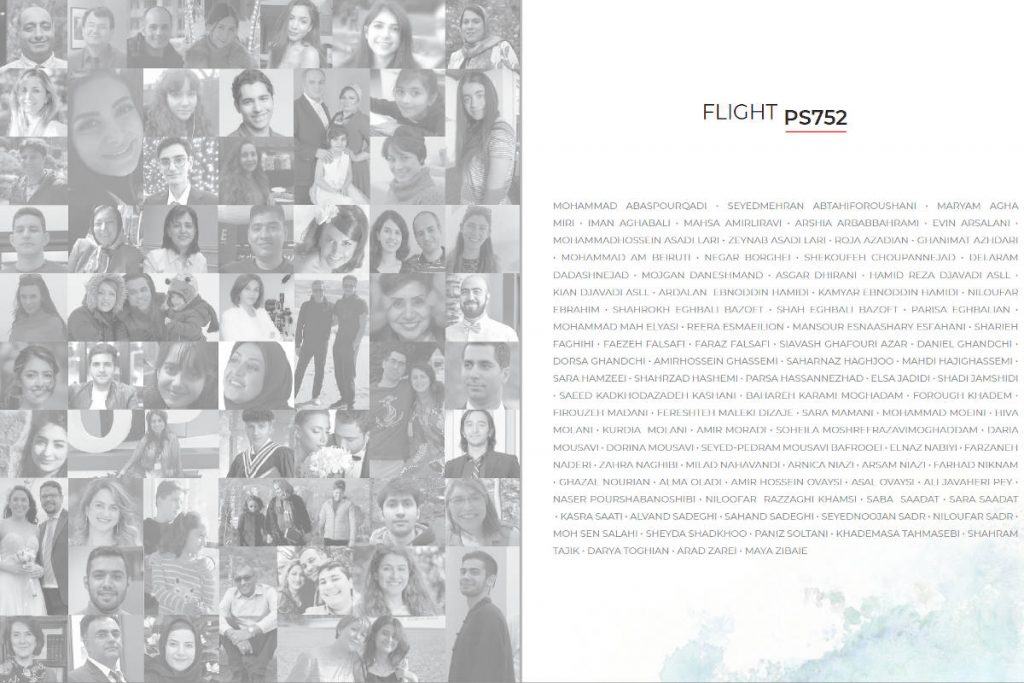 A broken cellphone and a muddied wallet were the only possessions Alireza Ghandchi received from Iran after his wife and two children were killed in a Ukrainian plane crash last year.

“No luggage, no dolls, no anything,” he said.

His son, Daniel, was eight-years-old and his daughter, Dorsa, was just three days shy of turning 16. The family from Richmond Hill, Ont., was returning home after spending the holidays in Iran when their plane — Ukraine International Airlines flight PS752 — was shot down by the Iranian army.

Ghandchi says his last conversation was with his daughter about 90 minutes before the flight while his wife, Faezeh, was checking in.

Everything was fine, Dorsa told him.

Now, pictures of his family fill his walls and memories of them fill his heart. When it gets overwhelming, Ghandchi goes into his storage, smells his wife’s perfume, hugs his children’s clothes and cries.

Ghandchi says there are times when nothing at all can help him with the grief of losing his entire family.

All 176 passengers on board the Ukraine passenger jet died in the crash on Jan. 8, 2020. There were 138 people on board with ties to Canada.

A year later, families cling to memories of their lost loved ones along with a few mementoes they received from the Iranian authorities.

Not all of the passengers’ personal possessions were destroyed in the crash. There were reports of looting at the site of the crash and some of the victims’ families have accused Iranian authorities of withholding valuable items such as jewelry, cellphones and cash.

Ralph Goodale, who is Ottawa’s special adviser on the Ukrainian plane crash, blasted Iran in a recent report for its treatment of the victims’ families, including the “withholding of personal effects.”

For Amirali Alavi, who lost his mother, Neda Sadighi, in the tragedy, the past year has been “one devastating blow after another.”

He received her pristine boarding pass, a few crumpled rings, a destroyed laptop, a few credit cards and identification — but no wallet, no luggage, no carry-on. Most of her jewelry was missing as was the cash she carried.

“Some of these things don’t have monetary value, but they have a lot of sentimental value to the families,” Alavi said.

Alavi is not alone.

Several other families say they’ve received little to nothing of their loved ones’ possessions back from Iran, which further compounds their grief.

Iran allocates payment for downing Ukraine plane, but Ottawa says no offer yet

Most of the relatives have banded together to form the Association of Families of Flight PS752 Victims. With contacts throughout Iran, they’re doing their own investigation, Alavi said.

They’ve unearthed video of the crash site that shows officials going through passengers’ bags and sorting them into bins, he said.

“They’re separating the contents, taking them out without any effort of preserving them and tossing the bags in one box, belongings in the other box,” Alavi said.

“Nobody knows what happened to them.”

He said one family got back a laptop without its hard drive, while another received a leather bracelet without its gold pieces.

Tensions were running high on the day the Ukrainian plane was downed.

Hours before the crash, Iran launched an attack on U.S. military forces at two airbases in Iraq in retaliation for the killing of Qasem Soleimani, a feared general and head of the Quds Force of the Islamic Revolutionary Guard.

Alavi, a law and business student at the University of Toronto, watched an online flight tracker as PS752 took off at 6:12 a.m. Tehran time, more than an hour late from its scheduled departure time. He felt a sense of relief when the site showed the plane making its way into Azerbaijan airspace.

He was excited to have his mother back. In 2010, Sadighi, an ophthalmologist, gave up her practice in Iran and moved to Canada with her husband, Farzad Alavi, a doctor, hoping for a better life for their son.

The tracking site Alavi watched that night was wrong. Six minutes after takeoff, the plane was hit by ground-to-air missiles and crashed into a children’s playground.

Iran said the takedown was human error, which many families do not believe.

Mahmoud Zibaie also tracked the flight online. He even took a video of the tracking technology to later show it to his computer-savvy 15-year-old daughter, Maya, who was on the plane with his wife, Shahrzad Hashemi.

A few minutes after takeoff, he left to brew some tea. By the time he returned to his computer, the plane had vanished from the screen. He soon saw reports of the crash on social media.

His pain and anguish remain fresh and he is overwhelmed at times by feelings of guilt. Zibaie was supposed to be on that plane with his family, but he came home a few days earlier because he worried about taking too much time off from his new job.

“It’s very, very, very tough still, the wound is fresh. And I believe that it will take a very long time to heal,” he said.

Like several other families, Zibaie has channelled much of his grief towards building a school in an impoverished part of Iran.

Zibaie still looks at Maya’s first email she sent when she was four years old _ a painting she made on the computer _ for comfort. His wife was a decorative painter and his daughter had inherited her talents.

He applied to immigrate to Canada in 2006 when Maya was two years old. They landed in Toronto in 2016. Four years later, he buried his wife and daughter in Tehran.

Zibaie found he could no longer live in the same home in Toronto so he moved to Ottawa.

He, too, wishes for more of his family’s belongings back.

He has gotten back his daughter’s burned passport and some of his wife’s banking cards.

Arman Abtahi was relieved when his brother’s remains arrived in a sealed coffin so the last memory of him would be of the final time the family had seen him — smiling and waving goodbye.

He had hoped the Iranian authorities would send back his brother’s ring so their mother could have something of her 37-year-old son.

“We didn’t get back anything,” he said. “Not his luggage, not his watch, not his ring, we just got his body.”

Abtahi’s brother was a postdoctoral scholar at the University of British Columbia. He had gone to Iran to celebrate his first wedding anniversary because his wife’s visa to Canada was rejected.

The last thing Abtahi told his brother was that he would pick him up at the airport.

“Instead, I went to the airport to go back to Iran to bury him,” he said.