Birds and mammals can be a significant hazard to an aircraft. 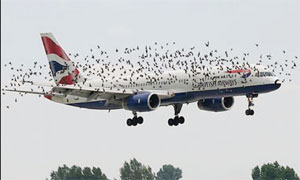 At the La Ronge, SK Airport in January 2002, a provincial medevac King
Air 200 hit a deer after landing. The deer was part of a small herd
that had darted across the runway in front of the airplane. The left
propeller and engine were significantly damaged. Fortunately, the two
pilots, an air ambulance nurse and a paramedic onboard were not hurt.

On
Sept. 22, 1995, a US Air Force E-3B AWACS began its takeoff roll at
Elmendorf Air Force Base in Alaska. The mission was to be a routine,
6.5-hour training flight. As the four-engine airplane lifted off the
runway, it struck a flock of geese. Some of the large birds were
ingested in the left engines; one lost power and the other was shut
down. The 165-ton aircraft, which couldn’t gain altitude or be
controlled, rolled left and crashed into a treed hillside. All 24 crew
members were killed.

Birds and mammals can be a significant
hazard to aircraft. Worldwide, bird strikes alone cost the airlines
about US$1.2 billion each year. Since 1975, five jet airliners have
been involved in major accidents where birds played a significant role.
Mammals are hit by aircraft much less frequently (179 reported strikes
in Canada since 1998). Their size has ranged from rodents and bats to
moose and deer. Coyotes, dogs, skunks, foxes, groundhogs, muskrats,
raccoons, rabbits, and even a turtle have also been hit by airplanes in
this country.

In Canada, since 1998 there have been 7,266
reported bird strikes involving civilian aircraft and 671 involving
military aircraft. A US study estimated that only 20% of bird strikes
are reported. Between 2002 and 2005, there was an average of 158
additional reported bird strikes each year in this country, which may
have partly been the result of global warming and the movement of
species northward, as scientists have observed in the past few years.

Because
aircraft operate in the same ground and air environment as birds, and
mammals sometimes get on runways, taxiways and aprons, pilots must be
vigilant for animals when operating aircraft. Air Traffic Services
(ATS) personnel provide information to pilots about sighted animals,
but they cannot see every creature on or near the airfield that might
be a hazard to aircraft. Pilots can help each other by reporting flocks
of birds or mammals to ATS, or at smaller aerodromes where there is no
ATS presence, on the local frequency.

Most bird strikes occur in
the airport environment. Approximately 40% of reported strikes occurred
while aircraft were taking off or landing. About 70% of all bird
strikes happened within 500 feet AGL, including 65% of strikes that
caused substantial damage to aircraft. Birds at higher altitudes pose a
serious hazard to air traffic too. More than 1,300 strikes involving
aircraft at heights above 5,000 feet AGL were reported from 1990 to
2003 in North America. The world height record for a bird strike is
37,000 feet!

Large commercial aircraft are certified to be able
to continue flying after being hit by a 4-lb (1.8-kg) bird. However, 36
species of birds in North America are heavier than 4 lbs, and most
large birds (e.g., geese, swans, and cranes) travel in flocks, which
increases the potential danger substantially. About 30% of reported
bird strikes involve more than one bird. Even flocks of small birds
(e.g., starlings, blackbirds) and single, medium-sized birds (e.g.,
gulls, ducks, hawks) can cause an engine failure or substantial
airframe damage.

To get an idea of the kind of destruction that
a bird strike can cause, consider the following: An aircraft flying at
250 KTAS that collides with a 10-lb. (4.5-kg) goose experiences a
collision impact force of approximately 72,600 lb. (33,000 kg). Per
square inch, the force is about 1,500 lb (680 kg), which is 17 times
more powerful than the force of a pneumatic nail gun! A 20% change in
airspeed will result in a 44% proportional change in the collision
force.

Information about migratory birds is in the RAC Section
of the Aeronautical Information Publication and the Aerodrome Wildlife
Control (AWC) part of the Canada Civil Aviation website. Both sources
include charts depicting spring and autumn migration routes for
different species, the typical altitudes flown, and areas covered.
Altitudes vary from 2,000 to 20,000 ft, and in the case of migrating
geese, there can be as many as one million birds moving in the same
direction almost simultaneously. Pilots who have experienced a bird
strike should fill out a Bird/Wildlife Strike Report, found in the RAC
Section or online on the AWC site.

To minimize the danger of animals to
aircraft on the ground and in the skies right above airfields, wildlife
management is practised at Canadian airports. Changes to the Canadian
Aviation Regulations resulted in a new requirement, effective Dec. 30,
2006, related to the development, implementation and maintenance of
airport wildlife management plans. Operators are responsible for
ensuring that a wildlife assessment for their aerodrome is conducted,
managing wildlife hazards, habitats and food sources, and monitoring
how the land at and near the airport is used. Operators must also
ensure that airport operations staff involved in wildlife
management/control are appropriately trained, and their training is
documented.

Managing wildlife habitat involves ensuring that
airfield grassy areas, ditches, shorelines, etc. are kept in a
condition that discourages animals, particularly birds, from
congregating, searching for food, and making homes. Airport perimeter
fencing is maintained to discourage dogs, foxes and other mammals from
burrowing underneath and entering the airside restricted area. Wildlife
Control officers patrol the airfield and use trained dogs, pyrotechnics
(which create a loud bang), and even falcons (at airports in Toronto
and Halifax, and Canadian Forces air bases) to harass birds. The
officers are also trained in the use of firearms and use them, as a
last resort, to eliminate animals (except those which are endangered)
that are a threat to aircraft and are not responding to non-lethal
measures. Since migrating birds cross national airspace boundaries,
Bird Strike Committee Canada, a non-profit organization chaired by
Transport Canada, and its American counterpart, Bird Strike Committee
USA, hold a joint meeting each year. The purpose of the Committees is
“to enhance flight safety by reducing collisions with birds.” Parties
in attendance include TC and Federal Aviation Administration
inspectors, airline, military, and airport operations personnel,
wildlife control specialists, pilots, researchers, and aircraft and
aircraft engine manufacturers. Presentations include topics such as
wildlife control techniques and new technologies, land-use issues,
training, engineering standards, and habitat management.

What
does the future hold with respect to bird strikes? More of them,
probably. The number of reported strikes in Canada since 2002 has
increased each year, and was 58% more in 2005 than three years before.
Will the increasing trend continue? Quite possibly, because air traffic
continues to grow in this country at about 3% per year, and certain
species of birds that are a hazard to aircraft have also increased
considerably. For example, between 1990 and 1999, the number of
Canadian geese were estimated to have tripled from two to six million
birds. However, through education and training, and good aircraft
operating practices and airport wildlife management, the risk of
hitting animals will continue to be kept as low as possible, a goal
that many aviation professionals work hard to achieve every day.