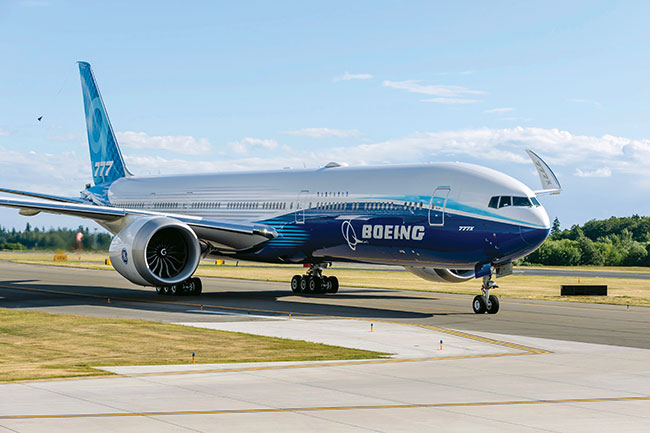 Derived from the GE90 platform, two massive GE9X engines power the first flight of the 777X in January.

The massive and futuristic GE90 engine, touted in the 1990s as the world’s largest and most powerful jet engine, had become an embarrassing business failure by 1998.

Launched in 1990 with great fanfare, the GE90 was stuck in last place in a three-engine battle against Rolls-Royce and Pratt & Whitney to power the new Boeing 777 aircraft. Despite its technology breakthroughs, including aviation’s first carbon-fibre composite fan blades, the GE90 program faced continual technical and financial setbacks. Some key airlines viewed the engine as too expensive and risky for the 777, designed to fly over the Pacific Ocean with only two engines. GE had expected other aircraft applications for the GE90, but they never materialized.

Troubles culminated in 1998 with GE corporate taking a US$275 million tax write-off after cancelling a GE90 upgrade development program to make the engine capable of 102,000 pounds of thrust for a larger Boeing 777 model on the drawing board. The financial press had a field day with the apparent demise of GE’s most expensive new product in decades.

The fall of the once-heralded jet propulsion technology wonder became woefully apparent when Jack Welch, then GE’s corporate chairman, wrote to a GE Aviation executive, “The GE90 is dead, put a stake in its heart.” Rubbing salt in the wound, even the GE90’s launch customer, British Airways, switched to a Rolls-Royce engine for future 777s.

However, GE Aviation president Jim McNerney and his determined team in Evendale, Ohio, saw the GE90 in a very different light. And their doggedness would change jet propulsion history.

McNerney inherited the GE90 troubles. He became president of GE Aviation in 1997 after leading several GE operations. While he wasn’t a propulsion engineer, he trusted his technical leaders in Evendale.

On-wing power
The Evendale team strongly believed in the long-term potential for their massive, beleaguered turbofan. For one, the GE90’s fuel efficiency quietly attracted rave reviews from operators of the extended-range 777-200ER, which entered service in 1997. The more the 777 grew, the better the GE90 performed against its competitors. For the GE90-94B engine variant developed in 1998, GE designed a more capable compressor. It was the foundation for much bigger things to come.

In late 1998, GE Aviation leaders traveled the globe to generate enthusiasm from several major carriers, most notably Air France, for a new GE90 being proposed to produce an unheard-of 115,000 pounds of thrust for bigger, longer-range 777s being evaluated by Boeing. Boeing’s balk at GE’s initial proposal for an exclusive engine agreement on the larger 777s did not deter McNerney’s team. While frustrated by the GE90, Welch agreed to support a larger GE90 if a sole-source engine deal on the 777 could be reached.

In a dramatic decision, Boeing selected the GE90-115B turbofan in July 1999 as the exclusive power for longer-range Boeing 777-300ER and 777-200LR jetliners. It was the greatest comeback in modern GE Aviation history. At 115,000 pounds of thrust, the GE90-115B would be far-and-away the “world’s most powerful jet engine,” surpassing its GE90 predecessors and all competitors. In one fell swoop, the 777’s propulsion landscape transformed.

The stakes for GE Aviation were huge, and tensions ran high in the president’s office in Evendale’s Building 100. After all, the company’s future in high-thrust turbofans was in the balance, and the winning sole-source bid was financially complex and aggressive. In common aviation parlance, the bid was a “huge bet.” Two days before Boeing announced the deal, McNerney turns to Chadwell, his trusted lieutenant, and asks pointedly, “We didn’t get snookered, did we?”

With a broad smile and calm assurance, Chadwell, who had a history of selling “big bets” to his bosses, responded, “Jim, it’s a good deal. It will make money for Boeing and GE.”

Days later, Jack Welch reflected McNerney’s anxiety during a press event with Boeing at Rockefeller Center in New York City to announce the GE90-powered 777-300ER and -200LR. “The GE90 is the most money I’ve ever spent on a new product, so let’s hope it all works out,” he said.

Publicly, Boeing said the 777-300ER and -200LR filled a niche market and forecasted a conservative 500 orders. Also, many analysts viewed the Boeing forecast as too optimistic, because major carriers such as United, American, and Singapore already operated large 777 fleets with P&W and Rolls-Royce engines.

Derivative engines
In the end, the naysayers were wrong. While GE’s competitors boosted the power of their derivative engines, they still required substantial design changes to achieve thrust beyond 100,000 pounds. The GE90-115B was the right solution. “The GE90-115B is a culmination of our original strategy to build a new centerline engine,” said McNerney, adding that the engine “hits the sweet spot” on the original design from 1990.

GE90 technical improvements would prove to bring greater efficiency to longer-range 777s at lower risk. The fan grew to 128 inches with composite blades in a more efficient, swept-aero design. The 3D aero-designed GE90-94B compressor was adopted, which eliminated one stage (10 to 9) and added one booster stage (three to four). It increased airflow while managing core temperatures.

Over time, Boeing orders more than doubled its original forecast of 500 deliveries. The GE90-115B launched in 2000 with a Japan Airlines order for 777-300ERs and then demonstrated a fabulous service entry. The 777-300ER became the most profitable long-range jetliner and the most popular 777 by a wide margin. GE90-115B reliability and performance would set industry standards.

Despite Welch’s early frustration with GE90 setbacks, one of his first calls after the GE90-115B win was to congratulate retired GE Aviation executive Brian Rowe, who masterminded the original GE90 concept. As Rowe wrote in his autobiography: “I felt vindicated that I had made the right choice in the size and configuration of the engine. Good airplanes grow, and they require good engines to grow with them.”

Today, one can barely imagine GE’s commercial engine portfolio without the GE90-115B. Not only would the engine tally robust sales and airline accolades, but also its architecture and mechanical design influenced every GE and CFM turbofan for 20 years, from the popular GEnx and record-selling CFM LEAP engine to the Passport for corporate jets.

Adding the 777X
January 25, 2020, was a historic day for Boeing and GE Aviation with the first flight of the 777X powered by two GE9X engines. Derived from the GE90, the GE9X is a high-bypass turbofan developed specifically for the Boeing 777X.

GE Aviation has been designing and testing the GE9X since 2013. In preparation for the 777X maiden flight, GE Aviation previously conducted 72 test flights of the engine totaling more than 400 hours on its Boeing 747 flying test bed in Victorville, CA. To date, the GE9X program has completed more than 4,100 hours of ground and air testing.

GE Aviation is wrapping up certification testing for the GE9X and expects the engine to be certified later this year. Eight GE9X engines and two spares have been produced to support the Boeing test program. Engines for the first three aircraft have been delivered and the balance will soon be in Seattle.

The GE9X engine is in the 100,000-pound thrust class and has the largest front fan at 134 inches in diameter with a composite fan case. The engine leverages 16 fourth generation carbon fibre composite fan blades. Other key features include: A highly efficient next-generation 27:1 pressure-ratio high-pressure compressor; a third-generation low emissions TAPS III combustor; 3D-printed parts; and lightweight and durable ceramic matrix composite (CMC) material in the combustor and turbine. | W

Rick Kennedy is a retiree, former media relations leader and author of GE Aviation: 100 Years of Reimagining Flight, to be released in June 2020.