From Iridium to Globalstar and from SiriusXM to Garmin, the sky is the limit for Aircraft connectivity options and Airborne Wi-Fi 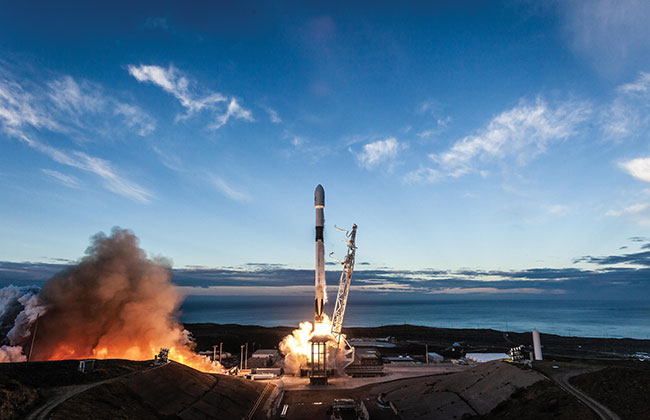 A SpaceX Falcon 9 takes off from Vandenberg Air Force Base n January 2019 to deliver the final payload of 10 satellites into Low Earth Orbit for the Iridium NEXT satellite constellation, opening up a new era of aviation communications. PHOTO: SPAcex

The past five years has seen an explosion of information streamed into an aircraft’s cockpit and cabin, regardless of altitude. With more than 2,200 satellites in orbit, and more on the way, the sky is the limit for connectivity options. Startup companies like OneWeb and SpaceX have received regulatory approval to launch copious amounts of satellites, which will clearly disrupt the aviation industry.

Business Aviation (BA) has seen a number of aviation-focused service providers deliver access to data, fax and voice services, while airborne. Owners and operators are offered end-to-end services, regardless of altitude and location. Ray McFeetors, flying in his corporate Cessna CJ3, reports, “My iPhone and laptop connect automatically while airborne, no different then in my office. The system is completely transparent to me, I just use it.”

Some providers deliver content over their networks, such SiriusXM with aviation products that bring weather (and entertainment) into the cockpit, supporting both handheld and panel-mounted devices (like Garmin’s 396/496 portable GPS, or their GDL 69/69a panel solutions). Pilots were provided with access to weather information, allowing strategic flight decisions to be made while in flight. SiriusXM weather is augmented by ADS-B IN (in the U.S.), providing data supported by a variety of EFB applications, including ForeFlight and Garmin Pilot. Low Earth Orbit (LEO) satellite networks from Globalstar and Iridium have added voice calling, sms texting, email and access to data-driven applications.

There are three types of satellites: Geostationary (GEO); Medium Earth Orbit (MEO) and Low Earth Orbit (LEO). GEO satellites are stationed roughly 22,300 miles above the earth and fixed above a specific point. A LEO satellite constellation typically is comprised of 30 or more satellites, orbiting at high speed, 485 miles above the earth. MEO satellites reside in space between LEO and GEO satellites. The LEO constellation is in constant flight and is designed to have a satellite fly by the user at all times, thereby maintaining the communications link. Historically, Globalstar and Iridium where the two thousand pound guerrillas LEO providers, delivering low latency and low data speed connections, ideal for voice, texting and email communications. Interestingly, Canada’s own Telesat has been quietly launching their own LEO constellation, with service expected begin in 2022. Change in the satellite industry being driven by OneWeb and SpaceX as they build out dense constellations. Adrian Steckel, CEO of OneWeb, commented, “The successful manufacture, delivery and launch of this batch of 34 satellites is the latest proof point of the OneWeb plan. Importantly, today’s mission (February 6, 2020) also brings us closer to our next step, realizing our ultimate vision of providing access to high speed, reliable internet to everyone, everywhere.”

From an aviation perspective, the eco system can be split between satellite network providers, aviation hardware manufacturers and avionics shops. Compared to other industries, the aviation eco system is small, with a few players including: Globalstar; Iridium; Telesat; Gogo Flight (formerly AirCell); Collins Aerospace; Garmin; Honeywell; among others. Both Globalstar and Gogo manufacturer end point hardware, have their own networks and space operations centres. Network performance can be measured two ways, the end user experience or by the numbers – bandwidth, latency and price. Network reliability is typically greater than 95 per cent, based upon the product purchased, however, performance and reliability should be viewed from an end-to-end perspective: aircraft to satellite; satellite to satellite; satellite to ground stations; ground stations to terrestrial fiber networks (out to the open Internet). The cost of connectivity is very much like the conversation of “how long is a piece of string”. Bandwidth, lower latency, coverage and service levels will impact the monthly cost.

Globalstar’s Sat-Fi2 hardware is a small device that easily fits into a flight bag. Weighing 12.6 oz, it incorporates a flip-up satellite antenna, battery and built- in Wi-Fi antenna. It’s designed to turn your smartphone or tablet into a satellite-connected device, delivering voice, data and texting service. The Sat-Fi2 is assigned a 10-digit telephone number aligning to the country in which it was registered. The physical location of the Sat-Fi2 device does not matter during the telephone call. However, with a Canadian telephone number calling internationally, long distance rates will apply. Globalstar’s LEO constellation delivers roughly 72 Kbps of bandwidth (essentially a very fast modem, for those who remember dialup modems). The Sat-Fi 2 device can be situated on the aircraft’s glare shield and with visibility to the sky, connectivity should take place. With unlimited voice and data packages at US$50 per month (special time limited offer), it’s an exceptionally cost-effective alternative for flight crews to have connectivity (backup) in the aircraft and while on layovers.

Garmin’s approach to airborne connectivity is based upon their Connext product platform. Their avionics suite is satellite network agnostic. In fact, my Commander is equipped with a legacy Garmin AirCell voice hardware, TSOd/STCd allowing for integration of satellite telephony directly into the Garmin audio panel. Connext supports a variety of connectivity technologies including ADS-B, SiriusXM, and Iridium, with Wi-Fi and Bluetooth device connectivity. Although not designed to provide passengers with access from the cabin, it does provide connectivity options for the flight crew.

Inmarsat’s Business Aviation division has spent over 20 years delivering aircraft communications, with over 40 years of satellite experience. In collaboration with partners like Satcom Direct and Honeywell, they deliver an end to end solution focusing on global mobility. With worldwide coverage, 13 satellites with eight additional satellites to be launched over the next 4 years, Inmarsat delivers a variety of packages focused on BA: Jet Connex and SwiftBroadband. In 2022, Inmarsat will launch two GX satellites into highly elliptical orbits for service over the arctic. The current service delivers bandwidth beyond 20 Mbps per aircraft, supporting streaming video services like Netflix/YouTube, Voice Over IP, email, messaging, video conferencing, corporate VPN services and access to the internet.

AirCell (now Gogo Business Aviation) began delivering services in 1998, partnering with Garmin and delivering satellite telephone service, over its Air to Cell network. Gogo was successful in obtain an 850 GHz spectrum license from the FCC, allowing it to create an Air to Ground cellular network capable of delivering services to aircraft at 40,000 feet. With over 250 towers in North America, Gogo’s 4G network is being upgraded to 5G with service expected to be operational in 2021. Its service is augmented with Iridium and Inmarsat satellite services for aircraft operating outside of North America. Its GoGo KU platform delivers up to 25 Mbps of bandwidth to an aircraft. Gogo manufacturers its aircraft avionics platform, ATG and Avance, which provides the cellular, satellite and Wi-Fi hardware platform. The system supports a variety of content including: streaming video; e-mail; texting; voice calling; internet access; corporate VPN connectivity; inflight entertainment; and cockpit app data. Gogo offers flight departments and IT departments with an app to manage the aircraft hardware and services. Bandwidth can be increased without changing hardware. The move from 4G to 5G may require legacy ATG hardware to be upgraded to its newer Avance platform.

Satellite connectivity combined with certified hardware and installation services, delivers a variety of bandwidth and latency options to meet user expectations and budget requirements of BA owners, operators and flight departments. Aircraft manufacturers are building new aircraft with a greater number of sensors designed to provide flight crew and maintenance teams with real-time data. Airborne Wi-Fi uncorks the genie providing the connectivity necessary to unlock the power of data and analytics for proactive aircraft operations and maintenance.