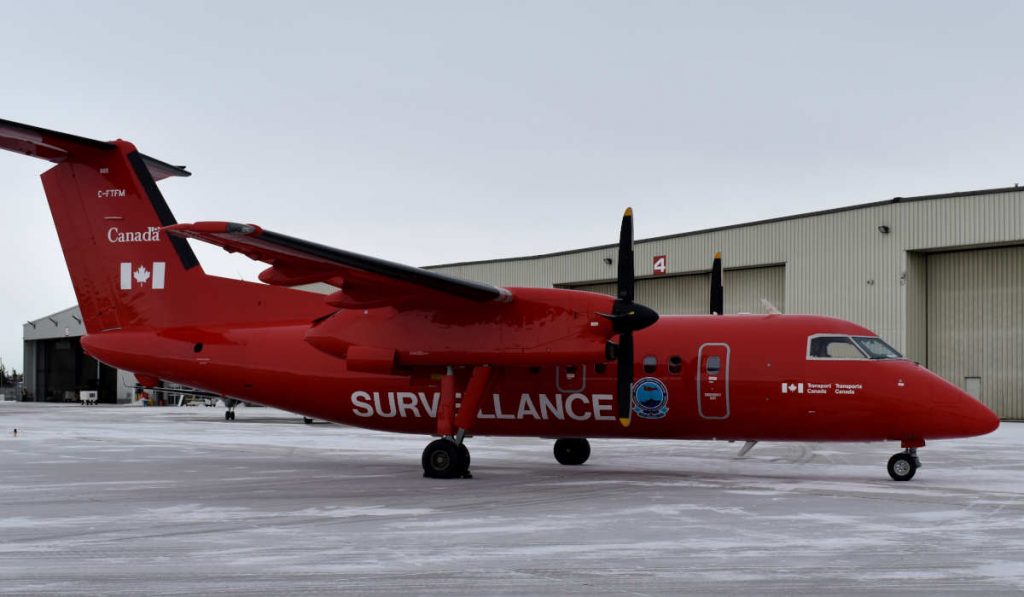 Transport Canada’s maritime surveillance aircraft are equipped with cameras that can covertly monitor vessels from five miles away and at 20,000-feet altitude. (Photo: Avmax Group)

Transport Canada on January 30 announced it has received a De Havilland Dash 8-103 msn 017 for its National Aerial Surveillance Program fleet. The aircraft was purchased pre-owned from Calgary-based Avmax Group and, according to Transport Canada, had the lowest number of hours when compared to any other Dash-8-100 on the market. Avmax’s MRO division prepared the aircraft for delivery and repainted it with the customer’s colour scheme.

The aircraft acquisition was made through the Government of Canada’s Oceans Protection Plan and the Whales Initiative. The National Aerial Surveillance (NAS) Program’s primary missions include detecting oil spills and other marine pollution, and monitoring ship and endangered whale movements.

Over the next two years, the Dash 8 will undergo modifications to become a maritime patrol aircraft, which will be equipped with specialized maritime surveillance systems that are currently used on Transport Canada’s existing fleet. The agency notes its surveillance aircraft are equipped with cameras that can covertly monitor vessels from five miles away and at 20,000-feet altitude. NAS aircraft are equipped with technology that can live stream video from the aircraft to personnel on the ground, in offices and to people’s phones.

Transport Canada, in a statement about the new aircraft purchase, explains aerial surveillance is a vital tool to monitor Canada’s endangered, iconic whale populations, and decrease oil spills. It is used to monitor the designated shipping zones for endangered North Atlantic right whales, located in the Gulf of St. Lawrence, and in Arctic operations such as verifying vessel pollution detected by satellites. Transport Canada is also building a new National Aerial Surveillance Program Complex in Iqaluit, Nunavut, to support northern operations.

“Our government is committed to safe navigation and protection of the marine environment,” said Marc Garneau, Minister of Transport. “Expanding our surveillance aircraft fleet allows us to improve local marine reporting and reduce the frequency of oil spills in Canada. This supports our commitment to protecting the endangered marine mammal population.”

Transport Canada notes that while the country’s oceans are a source of inspiration and pride, and contribute to the growth of Canada’s economy, there is a need for greater emphasis on marine safety and environmental protection as overseas trade and the movement of goods grow.