Features
Out of this world rotorcraft

Two NASA missions, including a 2020 launch, will test the limits of drone exploration 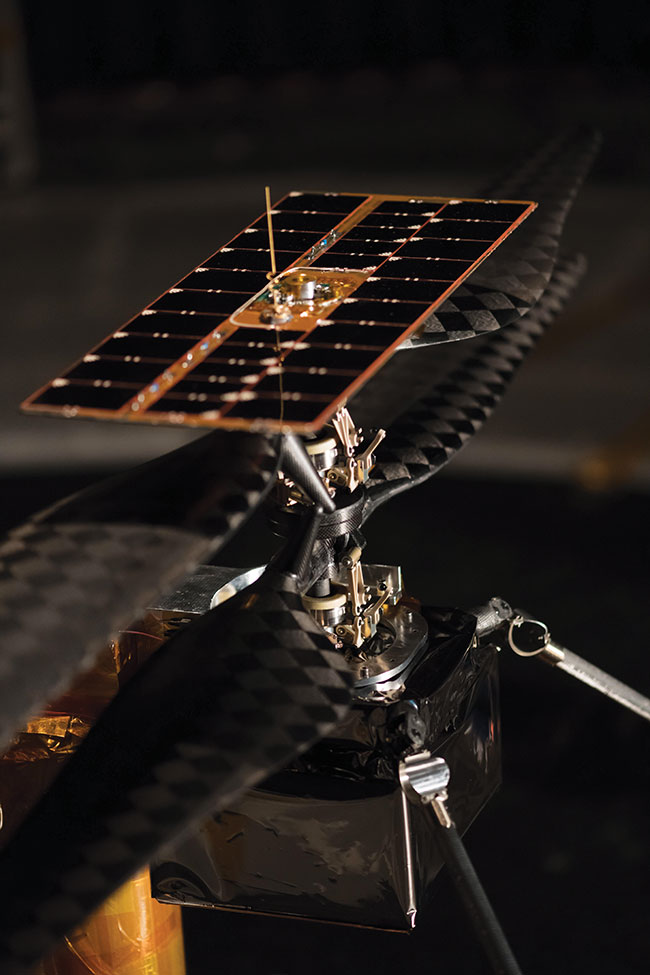 The Mars Helicopter is comprised of more than 1,500 individual pieces. PHOTO: NASA/JPL-CALTECH

In July 2019, the National Aeronautics and Space Administration selected a new mission to send a multirotor aircraft called Dragonfly to Saturn’s moon Titan as part of its New Frontiers program, which sets priorities for solar system exploration. New Frontiers already includes the New Horizons mission to Pluto and the Kuiper Belt; Juno to Jupiter; and OSIRIS-REx to the asteroid Bennu. Dragonfly is expected to launch in 2026 and arrive at Titan in 2034.

This marks the agency’s second planned rotorcraft mission, including its Mars Helicopter test vehicle that will be part of the Mars 2020 Rover mission, scheduled to launch in July 2020 – arriving at the Red Plant in February 2021 under the current timeline. This is an optimum – cost-saving – launch window based on the relative positions of Mars and Earth, perhaps best illustrated by the fact that NASA in mid-February 2019 started aero-braking procedures to reposition its MAVEN spacecraft, currently orbiting Mars, in preparation for the arrival of the 2020 Rover. MAVEN is designed to study Mars’ atmosphere from above and the Mars Helicopter demonstrator is preparing to operate within the atmosphere. Determining the viability of planetary exploration by rotorcraft only hints at the importance of the Mars 2020 Rover mission, which aims to search for the potential of life on Mars.”

Preparing for 2020 arrival
The highest point of MAVEN’s elliptical orbit, according to NASA, will be reduced from 6,200 to 4,500 kilometres above the planet’s surface to serve as a data-relay satellite for the Mars 2020 Rover mission. This increases potential coverage of the rover’s landing site, Jezero Crater, with orbits of Mars increasing to 6.8 per Earth day versus 5.3 previously. Described by NASA as an atmosphere-sniffing spacecraft, MAVEN – Mars Atmosphere and Volatile Evolution, built and operated by Lockheed Martin – will continue its primary mission to study Martian climate evolution. Based on geological features, such as riverbeds and other obvious liquid-driven erosion, scientists believe Mars has lost 99 per cent of its atmosphere due to planetary shifts and solar wind.

“Getting our helicopter into an extremely thin atmosphere is only part of the challenge,” said Teddy Tzanetos, test conductor for the Mars Helicopter. “To truly simulate flying on Mars we have to take away two-thirds of Earth’s gravity, because Mars’ gravity is that much weaker.”

The Mars Helicopter, which will be stowed in the belly pan of the Mars Rover, weighs approximately 1.8 kilograms (four pounds) with a fuselage that NASA describes as about the size of a softball. It employs twin, counter-rotating blades rotating at almost 3,000 rpm, a rate that is about 10 times faster than a helicopter on Earth in order to bite into the Martian atmosphere. Dragonfly, however, will be able to take advantage of Titan’s thick atmosphere as the first multirotor to fly on another plant. It is expected to be equipped with eight rotors, allowing it to fly like a large drone, and powered by plutonium-238, a radioactive material – not the type used in nuclear weapons or reactors – that produces alpha particles. Used for NASA’s deep-space exploration vehicles, these ionizing particles, which can be shielded by material as thin as a piece of paper, are used to turn heat into voltage.

Looking for life
The second-largest moon in our solar system, Titan has a nitrogen-based atmosphere like Earth, but it is approximately four times as thick. It’s clouds – and rain – are primarily comprised of methane, as other organics form in Titan’s atmosphere and fall like light snow. This environment leads to complex organics and lakes of liquid hydrocarbon (including a subsurface ocean), energy and water similar to elements that may have sparked life on Earth.

NASA describes Titan as an analogue to the very early Earth, hoping the moon – larger than planet Mercury – can provide clues to how life may have arisen on our planet. During its 2.7-year baseline mission, NASA explains Dragonfly will explore diverse environments from organic dunes to the floor of an impact crater where liquid water and complex organic materials key to life once existed together for possibly tens of thousands of years. 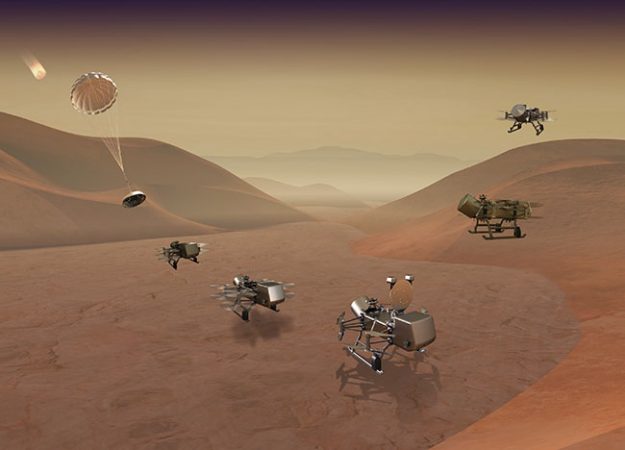 Dragonfly is expected to fly more than 175 kilometers – double the distance travelled by all of the Mars rovers. ILLUSTRATION: JOHNS HOPKINS APL

Dragonfly flights
Dragonfly will explore this region in short flights, building up to what NASA describes as a series of longer, leapfrog flights of up to eight kilometers, with the ability to take samples from compelling areas along its route. NASA explains Dragonfly will finally reach Selk impact crater, where there is evidence of past liquid water, organics and energy, which together make up the recipe for life.

“With the Dragonfly mission, NASA will once again do what no one else can do,” said NASA Administrator Jim Bridenstine. “Visiting this mysterious ocean world could revolutionize what we know about life in the universe. This cutting-edge mission would have been unthinkable even just a few years ago, but we’re now ready for Dragonfly’s amazing flight.”

The Dragonfly team will take advantage of 13 years’ worth of Cassini data – from the historic, now ended Saturn mission (1997 to 2017) – to choose a calm weather period to land, in addition to a safe initial landing site at the equatorial Shangri-La dune fields.

“Titan is unlike any other place in the solar system, and Dragonfly is like no other mission,” said Thomas Zurbuchen, NASA’s associate administrator for science. “It’s remarkable to think of this rotorcraft flying miles and miles across the organic sand dunes of Saturn’s largest moon, exploring the processes that shape this extraordinary environment.”

The Mars Helicopter will be deployed a few months after landing on Mars as the rover finds a suitable location to place it on the ground. NASA explains the rover then will be driven away from the helicopter to a safe distance and begin to relay commands. Its batteries will then be charged, tests performed, and controllers on Earth will command the first flight on another planet.

NASA is planning for a 30-day flight test campaign with up to five flights of incrementally farther distances, up to a few hundred metres and durations as long as 90 seconds. On its first flight, NASA explains the helicopter will make a vertical climb to about three metres, where it will hover for approximately 30 seconds.

The helicopter will need to survive and function in cold temperatures, including what NASA pegs as nights reaching as low as minus 90 degrees Celsius (minus 130 degrees Fahrenheit). The Mars Helicopter contains a heating mechanism to keep it warm during Martian nights, in addition solar cells to charge its lithium-ion batteries.

To put the planned helicopter demonstration into perspective, NASA explains a helicopter on the Martian surface is already at the Earth equivalent of 30,480 metres in altitude – with the altitude record for a helicopter flying on Earth at about 12,192 metres. “NASA has a proud history of firsts,” said Bridenstine. “The idea of a helicopter flying the skies of another planet is thrilling. The Mars Helicopter holds much promise for our future science, discovery and exploration missions to Mars.”

NASA considers the Mars Helicopter as a high-risk, high-reward demonstration, which will not impact the overall mission. If the helicopter does take flight as, future Mars missions could enlist second-generation helicopters to add an aerial dimension to their explorations.

“Our job is to prove that autonomous, controlled flight can be executed in the extremely thin Martian atmosphere,” said JPL’s MiMi Aung, the Mars Helicopter project manager. “Since our helicopter is designed as a flight test of experimental technology, it carries no science instruments. But if we prove powered flight on Mars can work, we look forward to the day when Mars helicopters can play an important role in future explorations of the Red Planet.”

Along with investigating difficult-to-reach destinations such as cliffs, caves and deep craters, NASA explains such helicopters could carry small instruments or act as scouts for human and robotic explorers. The agency intends to establish a sustained human presence on and around the Moon through its Artemis lunar exploration plans, using the Moon as a stepping stone to putting humans on Mars.

“With this joining of two great spacecraft, I can say definitively that all the pieces are in place for a historic mission of exploration,” said Zurbuchen.