At any given time, two-thirds of Canada’s Hercules fleet may be grounded by maintenance problems and old age. Both Boeing and Lockheed say they have the solution. 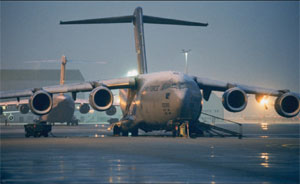 Two heavy hitters are warming up in the bullpen, set for a slugfest to
supply the Canadian Forces with airlift capacity beyond the scope of
the current fleet of 32 Lockheed Martin CC-130 Hercules. Some E models
of the latter have been in service in Canada since the late 1960s, the
newest stretched H-30 models since 1996. But the Marietta, Georgia
builder, one of the key players in this evolving project, has moved on;
its latest Herc is the J model with highly improved speed, range and
payload over Canada’s 19 E models and 13 H models, including two
stretched versions. The other big hitter is the Boeing C-17 Globemaster
jet, rebranded Airlifter for potential Canadian use. Another potential
contender is the Airbus A400M turboprop, midway in size between the
C-17 and the stretched C-130J, but it won’t see first flight until
possibly 2012.

Hercs
are arguably the most successful tactical transport in the history of
military aviation. With its rear ramp, land-just-about-anywhere gear
and high propeller ground clearance, it was designed to operate from
unimproved airstrips in an active theatre of operations. The current CF
Hercs have a 36,000-pound cargo capacity and a maximum takeoff weight
of 155,000 pounds. Powered by four Allison T- 56-A-7/15 turbines, they
have a loaded range of just more than 2,000 nautical miles, a top speed
of 602 kilometres per hour at 20,000 feet and an operation ceiling of
33,000 feet. The latest J model has a loaded range of 2,900nm, a top
speed of 660 kph attributable to advanced propeller technology, and
routinely flies at 40,000 feet fully loaded.

Although they have
acquitted themselves admirably in an array of missions, the current
Hercs’ limitations were underscored by Canada’s response in the
aftermath of the Boxing Day tsunami that devastated several countries
around the Indian Ocean. The CF had to rent a US-registered Antonov 214
for five flights to deliver heavy equipment, particularly water
purifiers, to Sri Lanka, at an estimated cost of $5.5 million. In fact,
the CF routinely spends about $50 million annually on heavy-lift
capacity and has been mulling over for years whether it needs to have
the capacity as part of its air fleet.

A former Chief of the
Defence Staff, General Maurice Baril, raised the issue during testimony
before a parliamentary committee in May 2001. “Being able to deploy
rapidly into theatre is an important part of combat capability,” he
said, explaining that the CF had “faced some challenges” in getting
troops and equipment to Afghanistan. “We relied on the Americans and
the commercial sector,” Baril said. “We regularly contract out for
airlift, as do all our allies. In fact, only two of our allies, the US
and the UK, have a capability for outsized cargo. Nonetheless,
strategic airlift is an important part of our combat capability and we
are examining our options.”

But that option fell afoul of
government spending cuts at the Department of National Defence, notably
when former prime minister Jean Chrétien deemed new heavy-lift
capability unaffordable. While Finance Minister Ralph Goodale’s latest
budget does include more money for the military – including funding for
an unspecified number of “utility aircraft” to replace four CC-138 Twin
Otters used mainly in the North – enhanced tactical and/or strategic
airlift capacity didn’t emerge in the budget mix. That said, there is
$1.8 billion in DND’s Strategic Capability Investment Plan for 2007,
some of which could be allocated quickly once the government completes
its long-delayed foreign and defence policy review.

Al
DeQuetteville, Boeing’s Canadian vice-president, indicated that having
seen Chrétien’s handwriting on the wall, the company could “only wait
and see if there was any change in attitude.” The former head of the
Canadian air force said in an Ottawa interview that “the requirement
hadn’t gone away and the C-130 fleet were getting older by the day.”
Boeing used the hiatus to refine long-term lease options that could
make the C-17 affordable for Canada and some of its NATO allies. The
climate was helped by the fact that interest rates were heading south
toward record lows and the Canadian dollar was appreciating – by almost
25% in just two years.

Boeing had two “myths” to debunk. One was
about affordability, the other the belief that such large aircraft
would spend most of their time on airbase ramps. “That fails to
recognize that the C- 17 is a true dual-role airplane; it can do both
strategic and tactical work,” DeQuetteville said, adding that the UK
had similar reservations when it began considering C-17s. “They have
now operated the airplane at about 200% of their planned capacity; in
fact, they renegotiated their contract with us twice to up the support
rate.” Having initially planned for 3,000 hours a year for four
aircraft, the Royal Air Force has logged more than 6,000 hours in the
past 12 months. So happy is the RAF that the UK is not only buying its
four leased aircraft and ordering a fifth but also is considering
further C-17 additions.

When
Paul Martin moved into the Prime Minister’s Office he immediately began
making comments as to what would be needed to restore Canada’s place in
the world. For DND that included resurrecting the fundamental question
of how freight – often more than 50,000 kilograms at a time – could be
delivered quickly.

Martin has gone on record saying that the CF
“must be able to deploy quickly where they are most needed” and that
his administration’s military investment “must focus on transforming
our forces to ensure that they are capable, useable, deployable,
sustainable and interoperable.”

DeQuetteville said the C- 17 is
a logical choice because DND could operate four C- 17s, all costs in,
for about $150 million a year. That includes acquisition, financing at
a notional 6%, training, spares, maintenance and fuel for 800 hours per
airplane annually. “Take out the charter dollars they’re paying, take
out some Herc operating and maintenance dollars, and you can virtually
offset the cost of four of these airplanes and have the capability that
comes with them,” he said. “The army in particular has some very
crucial assets and if they’re to be relevant, they’ve got to be able to
get there.” A C-17, for example, could accommodate three of the new
Stryker combat vehicles, two support vehicles and personnel on one
direct transoceanic flight, with room to spare. While the C-130J and
A400M are designed to land on tacticallength runways, neither would
accommodate oversize cargo.

Peter Simmons, who speaks for
Lockheed-Martin Air Mobility Programs, challenged the outsize cargo
case in an interview from Marietta. “The most logical progression for
Canada is to replace its existing C-130 fleet with an airlift asset
that can meet all their requirements other than outsize strategic
lift,” he said. “The most logical way of addressing that is by renting
lift, as many other countries do.” He also played down the popular
characterization that “it’s a failing of a country to have to rent
outsize heavy lift.” He pointed out that although the USAF has more
than 100 huge Lockheed Martin C-5 Galaxy transports in addition to its
C-17s, it too rented a lot of Antonov time last year. “If you looked at
the ramps in all of the theatres where the US military are operating .
. . you will see Antonovs and commercial aircraft being used for heavy
lift. It’s a case of how much is enough.”

Most of the
USAF-rented aircraft are doing resupply work. Military assets such as
tanks are transported by C- 5s. “Canada really doesn’t need to deploy
tanks,” Simmons said. “The C-130J is a substantially more capable
aircraft than the existing C- 130 fleet. With maximum payloads, you’re
over 2,500 miles. Nor is the ‘J’ affected by altitude and heat. With
the older aircraft, the higher you go, the thinner the air and the less
thrust you’ve got, so it reduces your payload capability. That doesn’t
apply to the ‘J’. It can take off from the highest airfield in
Afghanistan, 6,500 feet, on a 90-degree day with max payload and still
maintain maximum range. We’ve flown the aircraft over 4,000 miles with
20,000 pounds on board, unrefuelled.” He reiterated that the ‘J’ isn’t
a strategic lifter but said Lockheed-Martin and many of its customers
are comfortable with that. “A J-30 can actually lift 90% of everything
NATO owns, so it’s a very small percentage of NATO equipment that needs
to go above and beyond a stretch Herc.”

Dequetteville
acknowledged some of that argument but was equally adamant that his
numbers speak for themselves: that 25 Hercules J models or 11 A400Ms
are needed to do what six C-17s can do. “Because you’re operating more
airplanes you’ve got more people, more spares, etc.; it costs about 50%
more to operate a fleet of C-130Js than a fleet of C-17s at the
500-mile range. When you start out to the longer ranges, which is
really where you’d expect the C-17 to be the strongest, the
discrimination really becomes quite dramatic.” He said this surprised
even Boeing when it began crunching the numbers. “It shows that the
C-17, even at the tactical range, where the C-130J should be optimized,
is more cost-effective even at the shorter range. And if you think
about speed, altitude and stops en route, that’s where this really
starts to become a detriment for the J. It puts a big arrow in this
myth about C-17 affordability.”

Gen. Rick Hillier, the new Chief
of the Defence Staff, appointed in early February after a distinguished
army career, has made it crisply clear that buying new airlift capacity
is not a priority despite the budget’s commitment to a better-funded
Canadian Forces. “I come from the school that if there is any way we
can assure ourselves of the lift and and responsiveness that we need
without owning it, then that’s the route I would recommend that we
would take,” he said in a speech to the Conference of Defence
Associations annual seminar in March.