Jet Support Services Inc., which provides maintenance support and financial services to the aviation industry, released its JSSI Business Aviation Index for the third quarter of 2018 and found the sector continues its positive utilization trend. This includes significant traction for helicopter usage. 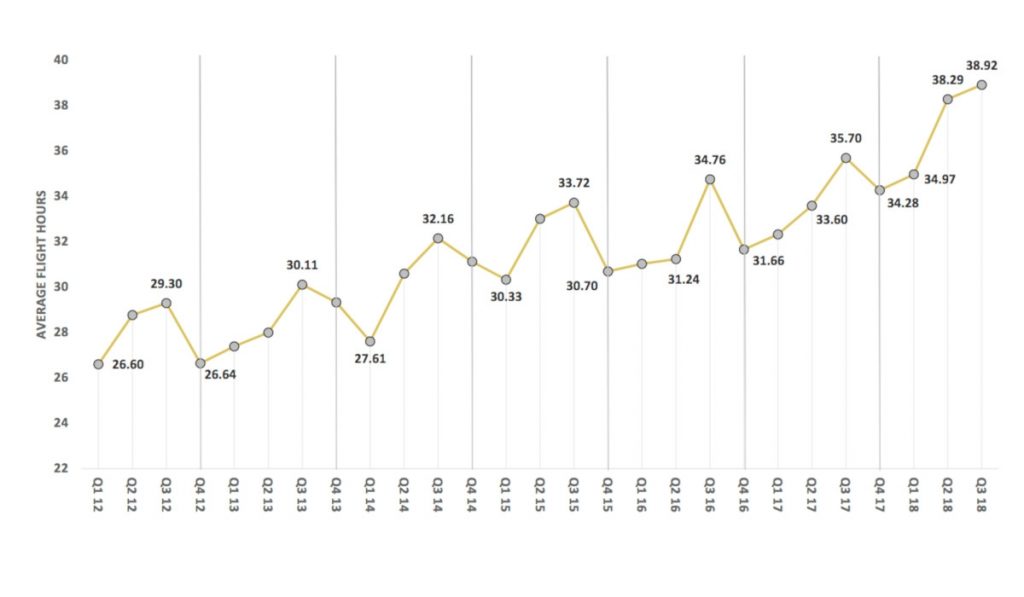 The Aviation sector continued to increase utilization from Q2 into Q3

“This positive trend in aircraft utilization demonstrates a high level of confidence in current economic conditions. The continued growth this year, with back-to-back quarters of flight hour averages not seen since 2008 and a year-over-year increase of 5.7 per cent, is a testament to today’s demand for private travel,” said Neil Book, president and CEO of JSSI.

Key findings from the JSSI Business Aviation Index for the third-quarter data include:

• Average aircraft utilization of 30.34 hours for the third quarter is the first time that flight activity has averaged over 30 hours in back-to-back quarters in more than a decade;

• The helicopter industry continues to rebound in 2018, with a 21.9 per cent increase in average flight hours in the third quarter;

• Of the nine industries analyzed, six reported an increase and three reported a decrease in quarter-over-quarter flight activity. The largest growth was in the healthcare sector, which reported a 7.9 per cent increase in flight activity compared to the second quarter of 2018.

• The largest year-over-year decreases in flight activity were seen in the manufacturing sector, with an 11.8 per cent reduction; and in the real estate sector, which reported a decrease of 9.9 per cent. The consumer goods industry remained relatively flat for the quarter, with a decrease of 1.0 per cent from the second quarter but an increase of 6.0 per cent year over year;

• Regional quarter-over-quarter decreases were seen in Central America, with a drop in average flight hours of 15.7 per cent; Asia-Pacific decreased by 8.7 per cent, and Europe ended the quarter with a 1.4 per cent decrease;

• North America flight hours increased 1.6 per cent quarter over quarter and 6.8 per cent year over year; and