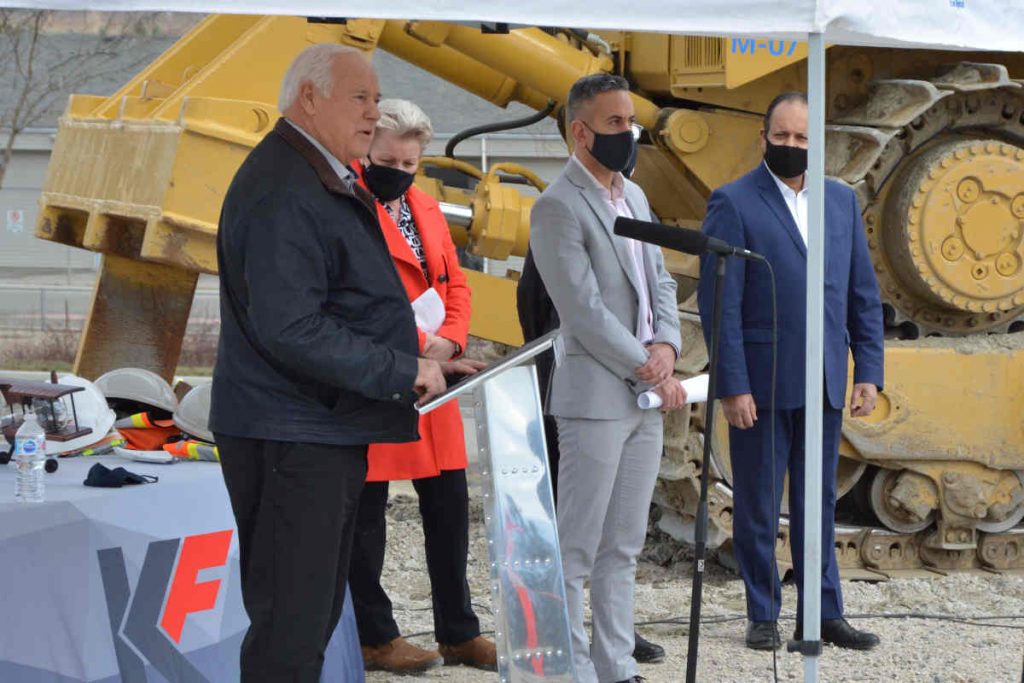 Scheduled for opening in 2022, KF Aerospace Centre for Excellence’s directors and builders were joined in the ground breaking by local officials, including Kelowna Mayor Colin Basran, who voted with City Council to unanimously approve the centre’s building plans last fall, and YLW Director Sam Samaddar.

“We have watched and benefitted as KF evolved from an aviation company to an aerospace company,” said Basran. “From airplane maintenance, engineering, defence programs, cargo operations and leasing, KF Aerospace celebrates 51 years in style by ground-breaking yet another game-changer in the industry.”

KF Aerospace describes the not-for-profit Centre for Excellence as a legacy endowment for the Okanagan, led by the company’s founder and CEO, Barry Lapointe. Designed to replicate an aircraft, KF Aerospace explains the building’s main hall forms the fuselage with wing-shaped hangars that will house aircraft showcasing aviation history in British Columbia and Canada.

“KF Aerospace is the longest privately held aerospace company in Canada,” said Samaddar. “The vision of Barry Lapointe is unparalleled and the Centre for Excellence will showcase the rich history the Okanagan has had with the aerospace industry. The Centre for Excellence will become a premier destination for the community and visitors to enjoy. It will inspire young aviators to share in the love for aviation that has inspired Barry in his aerospace journey.”

The project, which features made-in BC wood products and prefabricated mass timber components, is made possible through KF Aerospace’s collaboration with the Kelowna International Airport, the City of Kelowna and the Government of Canada.

“I am very excited to be under construction on this important project,” said Lapointe, who also serves as President of the Centre for Excellence. “This facility provides the foundation for the Centre’s work of celebrating our rich aviation history while providing opportunities for future generations of aviators. I am looking forward to dedicating this facility to the Okanagan when it opens in 2022.”