As many as 300 of Canada’s aviation and aerospace elite gathered at the seventh annual Northern Lights Award Foundation (NLAF) gala dinner and award ceremony on October 3rd in Toronto, to bestow top honours to seven outstanding women. Each year, the national not-for-profit foundation honours Canadian women in aviation and aerospace who have made significant contributions in their field and are opening pathways for other women to reach their full potential. 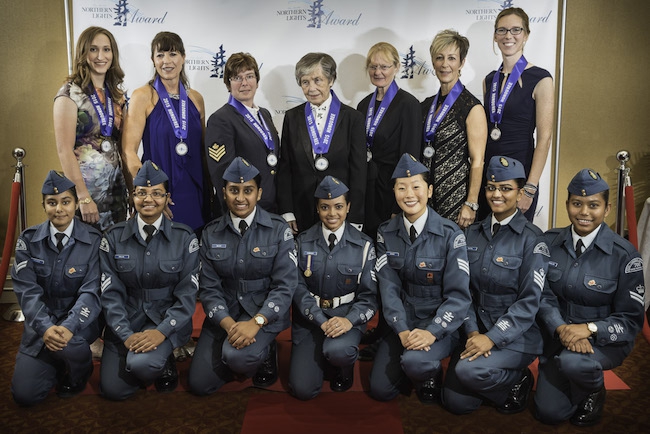 Joy Parker Blackwood, Vice President, Treasurer and Director of Business Development and Event Production for the Northern Lights Award Foundation said, “As we celebrate the leadership, purpose and courage of these amazing women who have made their mark, we inspire future generations of women to be confident and to persevere their aviation and aerospace goals to the fullest.”

The Foundation’s award program, called the Elsie MacGill Northern Lights (EMNL) Awards, is named after aviation pioneer and human rights advocate Elsie Gregory MacGill, who, amongst many accomplishments, designed the Maple Leaf Trainer II, and oversaw production of the Hawker Hurricane in Canada during the Second World War. MacGill served on aeronautical research and regulatory committees for the National Research Council, and of the United Nations. She was the first woman Chair of the United Nations Technical Committee, and drafted the first airworthiness regulations for the International Civil Aviation Organization (ICAO). MacGill was appointed to the Canadian Royal Commission on the Status of Women, and was made an Officer of the Order of Canada.

“We have a responsibility to empower and to show support of all women who strive to make their mark in the industry,” said Anna Pangrazzi, President and Director of Sales for the Northern Lights Award Foundation. “The amazing ladies that we have recognized throughout the years, who have not given up on their dream, and have taken on many challenges, are helping to make inroads that change perception and industry norms”.