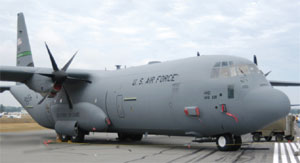 A Lockheed Martin C-130J arrived at the 2003 Abbotsford Air Show
against a backdrop of speculation over the continued life cycle of the
Canadian Forces’ ageing fleet of CC-130 Hercules transport aircraft.
Although the airplane appearing at Abbotsford was one of two belonging
to the California Air National Guard, Lockheed Martin has more than a
casual interest in keeping the C-130J front and centre in Canada.

At
any given time, up to two-thirds of Canada’s 32- aircraft Hercules
fleet may be grounded by maintenance problems and old age, according to
the Canadian Forces. “Canada has done a spectacular job keeping the
fleet serviceable and operating for as long as it has. But like most
things in life, you just have to come to the conclusion that
replacement is the only way forward,” said Peter Simmons, a spokesman
for Lockheed Martin Air Mobility.

Launched by the Royal Air
Force in 1994, over 100 C- 130J aircraft have been delivered to air
forces in Australia, Italy, Denmark and the US. Both Britain and the US
operate the C-130J in concert with the larger Boeing C-17.