Features Operations
One on One with Julie Gossen 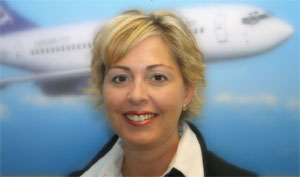 CanJet Airlines was originally launched in 2000, and sold to Canada
3000 in 2001. What lessons were learned from the first ‘go around’ that
have been applied to today’s model?
With
CanJet One, I think we were spread too far apart, too quickly. We were
between Winnipeg and St. John’s with too few aircraft. This time we’ve
taken a definite planned approach – we’ve determined who we are in the
market place, and what our actual target market is. Now we have been
able to provide a dependable quality product. We feel comfortable with
our strategic growth plans, supported by our growing customer service
base. We also can’t overlook our people – they are an exceptional group
when it comes to ensuring ontime flights, strategic advertising, and
most importantly, exceptional customer service.

You intend to
quadruple your fleet over the next three years with 20 new aircraft.
What expansion will accompany these new airplanes?
Most
important, we have to go where Atlantic Canadians and Eastern Canadians
want to go. We’re certainly going to be getting longer-range aircraft
that will provide more opportunities to fly to further destinations. I
think it’s safe to say that we will go transborder, and further south
than Florida.

New markets, and particularly those within the US,
are always a challenge at startup. We’ve learned to work in partnership
with associates who live in those markets, and we’ve learned to
successfully market our southern destinations here at home. Our St.
Pete’s-Halifax run, for example, has proved so successful that it
started in November rather than in February, as it did last year. What
we learned from flying to these destinations has benefited our overall
operations. Operating into and out of the US has given us a broader
perspective on how to build and operate a smarter airline based in
Atlantic Canada.

Is it safe to assume that the next aircraft will be the Boeing 737-700?
The
Boeing 737-200s that we have now have been good to us. [But] I don’t
think you should assume that it would be a Boeing product, even though
we have a marvelous relationship between Boeing’s main office and
ourselves. All aircraft suppliers will have an opportunity to do a
significant order, and we will do what is cost-effective and customer
friendly for our airline.

With some privatized airports in
Atlantic Canada in particular facing major financial challenges, what
impact do you see on CanJet?
There are some tough situations.
New Brunswick is going through a difficult time now, especially at
northern airports where service levels are deteriorating because of a
decline in traffic. CanJet will operate where it makes economic sense,
and we will fly into those airports that generate the required
passenger traffic. We’ll go where the customer demand is.