In a ceremony held Tuesday at the Victoria International Airport, Pacific Sky Aviation Inc. and Viking Air Ltd. broke ground at the site of the world’s first full flight simulator featuring a seaplane configuration for the legendary Twin Otter aircraft. 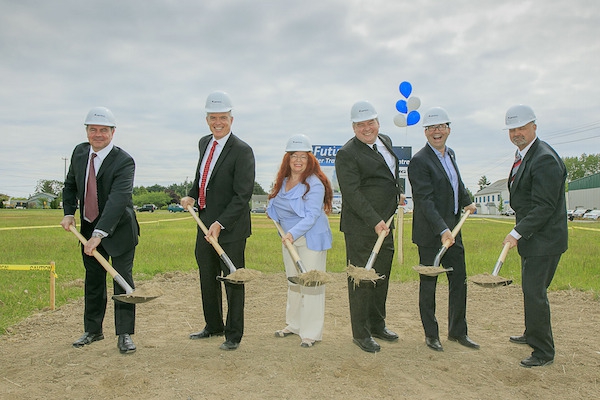 The 10,000 square foot, world-class Twin Otter Training Centre will be located next to Viking headquarters in Victoria, British Columbia, Canada. The Training Centre will house a state of the art Level “D” Full Flight Simulator / Seaplane Trainer and a flat panel Integrated Cockpit Procedures Trainer (IPT), utilizing the highly successful Series 400 Twin Otter aircraft as the launch platform. It is expected that the new facility will create approximately 20 new jobs at the Victoria airport and will result in hosting several hundred Twin Otter pilots from all over the world at the Victoria Airport each year for training.

The purpose-built facility will initially house one simulator bay for the Twin Otter, a dedicated IPT room, state of the art classrooms and briefing rooms, a customer lounge, staff offices and boardroom. The facility is configured so that additional simulator bays can be added for future expansion.

Michael Coughlin, CEO of Pacific Sky Aviation said, “This is an exciting day for Pacific Sky and Viking as we break ground on the new facility. Our new Twin Otter Training Centre will in turn break new ground in the industry – the Level “D” simulator offers the same level of training experience for Twin Otter crews as is currently available only to the most advanced commercial flight crews of major international OEM aircraft. For Twin Otter seaplane operators, pilots will be able to experience simulated takeoffs, landings and docking operations on a range of sea states and water conditions, including glassy water and a variety of wind conditions, reducing the time and cost for operators to develop seaplane captains.”

Pacific Sky Aviation expects that the facility and simulator will be certified and Ready For Training (RFT) by the fall of 2016.

David Curtis, President and CEO of Viking commented, “The Twin Otter operates in some of the most inhospitable regions of the world, ranging from the extreme climates of the Arctic and Antarctica to the tropics of South East Asia. It operates in the heights of the Himalayas and the Andes, to the open ocean of the Maldives. With such diversity of operating capabilities and configurations, being able to provide our customers with the highest level of training is absolutely essential.” Curtis added, “When considering the number of new build aircraft being added to the worldwide fleet, and the significant growth in international Seaplane operations, having access to the world’s only Twin Otter Seaplane simulator will not only allow us to alleviate the impending pilot shortage caused by long training cycles for qualified Seaplane crews, but will help us remove significant constraints to our future growth.”

Sherry Brydson, Chairman of the Board of Pacific Sky, added, “The re-launch of the Twin Otter program by Viking was a collaborative effort, with input from everyone who had a stake in the outcome. Those who build it, certify it, fly it, use it, own it, repair it and improve it are all part of a huge Twin Otter fan club. I am proud and happy to be part of that fan club as we celebrate this groundbreaking of the new Twin Otter Training Centre.”

Shirley Bond, British Columbia Minister of Jobs, Tourism and Skills Training and Responsible for Labour noted, “Locating the world’s first seaplane simulator and the Twin Otter Simulator training facility at the Victoria International Airport is exciting news for B.C.’s aerospace industry. This is good news for the economy with the creation of up to twenty jobs and major benefits as hundreds of pilots from around the world will be training annually at the facility. This is cutting edge technology that will provide a type of skills training for pilots that is in demand worldwide.”

The Level “D” simulator is being manufactured by TRU Simulation + Training of Montreal, Quebec, a Textron company, who are developing the integration of flight and marine models that will drive the visual and motion cues to replicate the aircraft performance in wheeled or seaplane configuration.