Qatar Airways recently received its 50th Boeing 777 recently, taking the total count of aircraft in operation to more than 180 single aisle and widebody aircraft. The global carrier operates the Boeing 777 to a host of destinations – including Houston, Buenos Aires and Los Angeles, which are a few of Qatar Airways’ longest destinations as measured by flight hours. 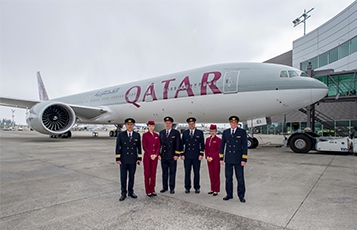 Qatar Airways Group Chief Executive, His Excellency Mr. Akbar Al Baker said: “We place passenger comfort and the flying experience at the forefront of our aircraft programme, and with the introduction of the Boeing 777 into the fleet just under a decade ago, our crew and passengers have come to know how comfortable and spacious the cabins are.

“We are proud to fly the Boeing 777 and this milestone in our fleet is a mark of the success we have had with Boeing and Qatar Airways’ fleet programme.”

More than 35 per cent of the airline’s route network is operated with a Boeing 777 (includes both passenger and freighter destinations).

When Qatar Airways’ first Boeing 777 order was made in 2006, the airline’s network reached just over 50 destinations. Now a decade later, with more than 150 destinations, the Boeing 777 has formed a core part of the fleet, and has been the backbone of the long haul and the ultra-long haul route expansion strategy.

“Over the last decade, Qatar Airways and Boeing have developed a strong and enduring partnership that began with their first 777 order,” said Ray Conner, president and CEO, Boeing Commercial Airplanes. “We are proud to celebrate the 50th 777 delivery and see this market-leading aircraft continue to play a vital role in the operations of such a premium operator as Qatar Airways.”

With a dual-class configuration (Economy and Business Class) featuring spacious cabin interiors, passengers have highly positive experiences with the Boeing 777, with the airline winning several accolades over the years for onboard product and cabin interiors.

In addition to passenger capacity, the total cargo capacity for the Boeing 777 Freighters carry 102 metric tonnes. Cargo is an essential part of the Qatar Airways growth strategy, and Qatar Airways Cargo is currently positioned as the third largest cargo carrier in the world. The Boeing 777 Freighters have been a core part of the fleet growth in product movement and distribution across the airline’s extensive cargo network.