March 18, 2015, Vancouver Island, B.C. - Mass casualties litter the rigid terrain in a remote location on northern Vancouver Island, British Columbia. Two hikers lie injured in a mountainous region inaccessible by road. And a small multi-engine aircraft is still missing along the coast of mainland British Columbia, the next of kin anxious for positive news of its location. 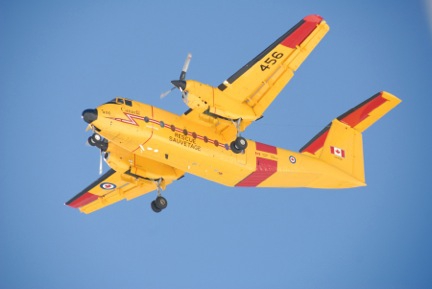 These are some of the training scenarios crews from Royal Canadian Air Force 442 Transport and Rescue Squadron experienced during their annual search and rescue exercise (SAREX) in Port Hardy, British Columbia, from March 2 to 5, 2015.

A CH-149 Cormorant helicopter and two CC-115 Buffalo aircraft, along with about 70 personnel from 19 Wing Comox, participated in the exercise based out of Port Hardy Airport.

“Annual training of this calibre is intended to gather all units within the search and rescue squadron to one central and off-site location, and test their knowledge and expertise in responding to various scenarios,” said Lieutenant-Colonel Clint Mowbray, 442 Squadron commanding officer, who participated as one of the Cormorant crew members during the exercise. “It is also an ideal opportunity to work with other SAR agencies through the provision of additional search assets, in the administration of medical first aid, and in the extraction of casualties.”

The airmen and airwomen of 442 Squadron are extremely grateful to the Town of Port Hardy and to Transport Canada for their hospitality, and for the use of the Port Hardy Airport to conduct training and to set up a simulated search and rescue headquarters. The squadron also acknowledges the hard work and professionalism of its partnering agencies in making the 2015 SAREX a resounding success.