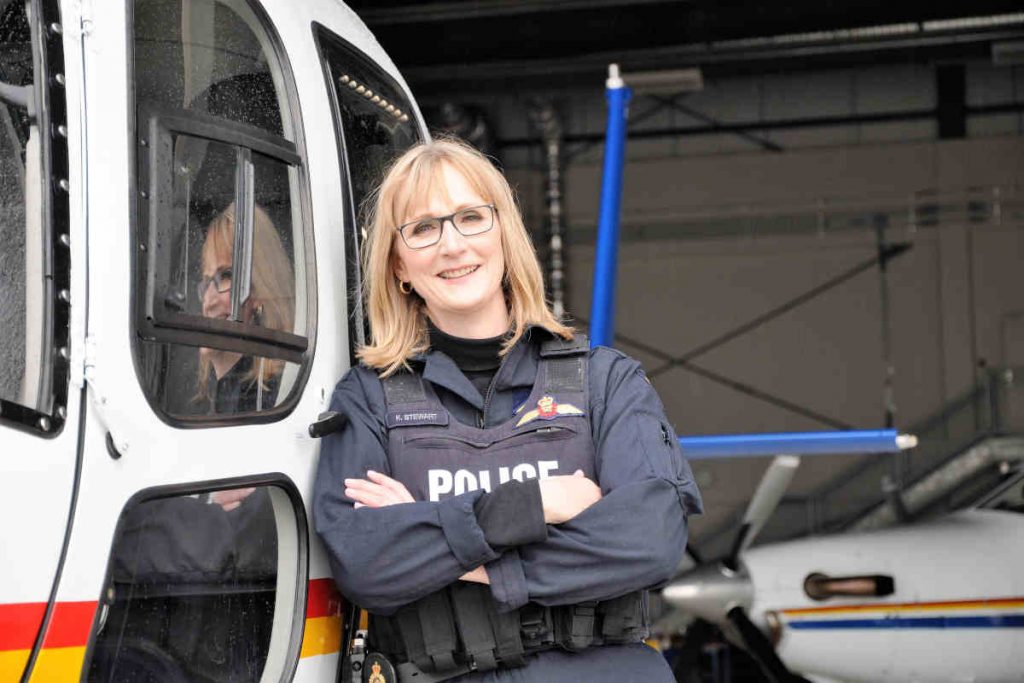 Pilot Kathy Stewart in 2017 completed conversion training to become a Regular Member of the RCMP and now holds the rank of Special Constable. (Photo: Morgan Palagain)

Kathy Stewart first began thinking about becoming a helicopter pilot at age 19 after finishing up eight months of work in the Northwest Territories, including four months in a forestry camp. She was born and raised in Toronto, but the remoteness of Canada’s North appealed to her, as did the Bell Longranger based at the camp just outside of Yellowknife.

Stewart’s first concrete step toward an outstanding career began in 1980 when she obtained a Private Pilot Licence (PPL). Now a Special Constable with the Air Services Branch of the Royal Canadian Mounted Police (RCMP), based out of Edmonton and with more than 13,000 flight hours, Stewart explains her sights were always set on the dynamic world of rotorcraft – “That ability to land virtually anywhere and to hover… your hands are on the controls and you are actively working the machine.”

The fixed-wing PPL was a means to an end, completed just days before Stewart’s application interview to attend Canadore College’s aviation program, where she would eventually complete a Commercial Helicopter license. Stewart – despite checking all of the boxes – was not admitted to the program after being told it would be a waste of time and money because she would not find a job. She persevered and was admitted to the program, along with another female student, in her second attempt a year later.

“Alexia Hannam at the NLAF gala said that she had never encountered any barriers to flying and I thought that is fabulous. That is the way that it should be,” says Stewart, recalling Hannam’s speech from the Northern Lights Aero Foundation annual event in September 2019, when both women were honoured for their inspiring contributions to the aviation industry. “People should be able to do what they want if they have the interest, the talent, and the skill set… there has been steady progress since I started.”

Stewart would soon prove her piloting skills during a checkride with Okanagan Helicopters Ltd., at the time one of Canada’s largest and most-progressive commercial operators. After graduating from Canadore there were no jobs in the helicopter industry, which was reeling from the effects of the 1979 oil crisis and Canada’s ill-timed 1980 National Energy Program. Stewart returned to the University of Toronto to finish her Bachelor of Science degree, which she initially interrupted to pursue her dream of becoming a helicopter pilot. By the late-1980s, however, the industry once again needed pilots and Okanagan, which was transitioning toward new ownership as Canadian Helicopters, not only hired Stewart, but also made significant investments to elevate her skills. “I was over the moon to be hired by them, because they had everything from very small helicopters to the biggest operating in Canada and around the world,” says Stewart. “They had bases across Canada and the opportunities were tremendous for me at that time, that I could gain various endorsements and work in a variety of situations.”

Stewart recalls being one of 18 low-time pilots hired in 1988 by Okanagan, which provided 72 hours of additional training on Jet Rangers. “It was not only a mountain course, but also an advanced operational course, and it just gave you a background to make you very strong as a low-time pilot getting started – exposure to a huge variety situations and skills,” says Stewart, who became a pool pilot on the Jet Ranger. In a matter of months, however, she was flying in northern Alberta and up into the Territories, quickly receiving an endorsement on an AStar. She flew with Canadian Helicopters into the year 2002 supporting a range of missions from fighting forest fires and wildlife management to powerline patrols and high-Arctic work. She earned a 500 endorsement working the diamond patch, followed by a twin-engine Bell 212 endorsement, and then a Sikorsky S-61 after obtaining an American license under NAFTA for seismic work in the U.S., which also led to wildfire missions.

Stewart recounts one of her most-memorable mission experiences in working the disaster zone of Hurricane Andrew when it reached south Florida in August 1992 as a Category 5, destroying more than 63,500 houses, damaging another 124,000, and killing 65 people. Canadian Helicopters sent two rotorcraft down initially to supply food, water and ice to survivors, before their mission changed to restore power. Hundreds of aircraft were working the disaster zone with little Air Traffic Control, because it had been wiped out by the storm. “Helicopters were between the ground and 500 feet; and fixed-wing were 500 feet and above,” explains Stewart, recalling how any sound surface from parking garages to playgrounds turned into makeshift helipads. “You didn’t lift-off without doing a 360 and having your head on a swivel because machines were flying by at 200 feet. It was organized chaos.”

Stewart’s experience gained over these diverse missions was eventually leveraged by Canadian Helicopters when she was promoted as operations manager. She served in this role for approximately three years, adding critical career skills like budgeting, crew scheduling, and asset usage, but her love for flying led her to take on a new role with the RCMP in 2002. “I looked at the RCMP as being a dream job, very mission-oriented flying, flying that makes a difference most of the time,” says Stewart, who had one young son with a second on the way when the opportunity came up. “I wanted to be a mom but I also wanted to be a pilot; and with the RCMP I saw an opportunity to do both.”

To support her new role, Stewart took initiative to earn her instrument rating, because the RCMP at the time was flying nights unaided, without Night Vision Goggles (NVGs). “I recognized that if I got in over my head, having an IFR and those skills might help keep me and the operation safer,” says Stewart, noting the RCMP is now heavily leveraging NVGs. “It’s really important with the RCMP to bring skills with you. You will build a lot of skill on NVGs, but you probably won’t do a huge amount of specialties like mountain flying, low-vis ops or long-line. If you’re looking at the RCMP, it’s important to have a well-rounded career before you join.”

Stewart feels police agencies more than ever recognize the efficacy of helicopters, even if they are constrained by budgets. The RCMP received its first twin-engine about a year ago. While more such investments are likely, she finds the AS350B3 to be a strong airframe for supporting the frontline members served by the Air Services Branch. “It is a proven platform for aerial support and being that eye in the sky. Our tactical flight officers and mission equipment provide tactical operational support to a command post or frontline members as situations unfold. The helicopter is a critical part of managing high-risk scenarios, as well as regular missions.” Most of the RCMP’s helicopter time involves a two-person crew – the pilot and a tactical flight officer on operational flights. “Approximately 10 to 15 per cent of the time, you wish you had a larger helicopter, primarily to support the Emergency Response Team or to haul a larger payload.”

Stewart enjoys the tactical nature of the RCMP, as well as their search-and-rescue missions. In late-2019, her team found a lost person who had been missing for 36 hours in sub-zero temperatures. He was located in a remote, heavily wooded, snow-covered area with no trails or cutlines for ground access, using NVGs and FLIR to pick up the heat signature from a small campfire. This allowed the crew to guide a SAR team on the ground into the area in the middle of the night to rescue him. “We made a difference between him being found and successfully rescued versus the alternative,” says Stewart, who also participated in last summer’s extensive search in remote Manitoba for two murder suspects.

“Each day is different and each mission is unique, so it keeps things young and fresh,” says Stewart. “Watching events unfold and contributing to a successful outcome by using the helicopter to its maximum effectiveness and supporting the frontline members is very rewarding.”