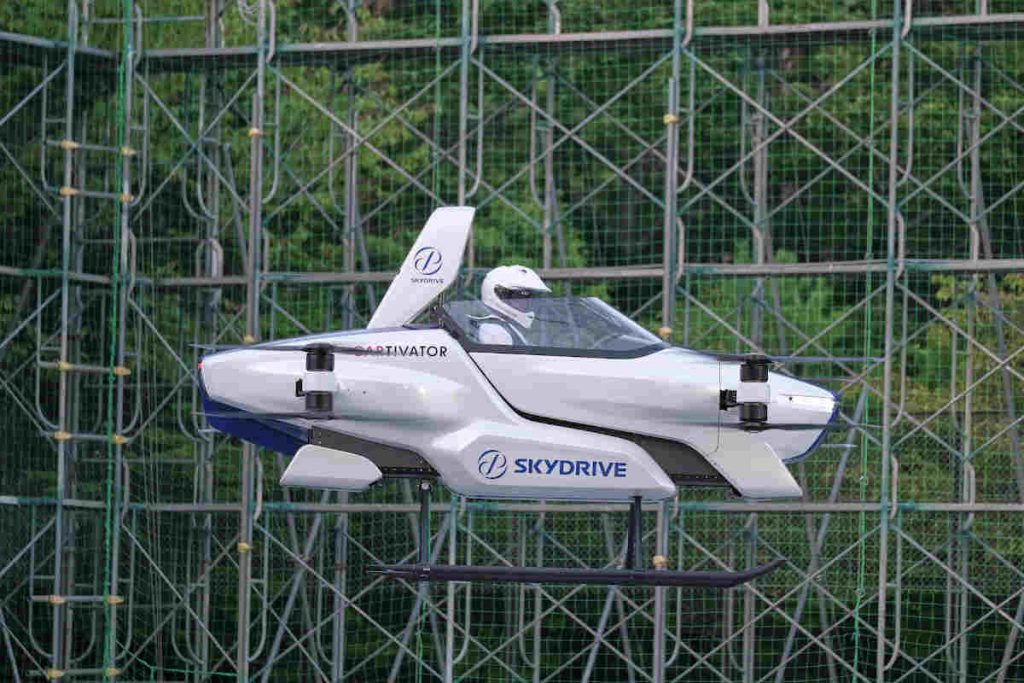 SkyDrive Inc. of Tokyo, Japan, conducted the first public demonstration flight of its SD-03 flying car on August 25, 2020 – a first for the country. The flight took place at the 10,000-square-metre Toyota Test Field, one of the largest in Japan and home to the company’s development base.

Three days after the demonstration flight, SkyDrive announced it had raised ¥3.9 Billion (approximately $48 million) from the Development Bank of Japan and nine other investors in a Series B round of fundraising, bringing its total number of investors to 12. (See full investor list below.)

SkyDrive explains the single-seat SD-03 took off in the early evening and circled the test field for about four minutes. A pilot was at the controls, but a computer-assisted control system helped provide flight stability and safety, as technical staff monitored flight conditions and aircraft performance.

SkyDrive states the SD-03 has been designed as the world’s smallest electric Vertical Take-Off and Landing (eVTOL) aircraft, fitting into the Urban Air Mobility sector poised to disrupt the future of primarily urban transportation. The aircraft measures two metres high, by four metres wide, and four metres long – requiring the space of two parked cars when on the ground.

The powertrain of the SD-03 consists of electric motors that drive rotors deployed in four locations, with each location housing two rotors that individually rotate in opposite directions, each driven by its own motor. The company explains the use of eight motors on the SD-03 is a means of ensuring safety in emergency situations during flight.

The company also points to the aircraft holding two white lights in front and a red light running around the bottom of the body, which are characteristics unique to flying cars, designed to make it easy for observers to tell which way the vehicle is heading.

SkyDrive will continue to conduct test flights under an expanding range of conditions with the goal of reaching safety provisions of the Civil Aeronautics Act. To this end, SkyDrive aims to obtain approval for flights outside the limits of the Toyota Test Field before the end of 2020. The company projects the SD-03 will be ready for commercialization in 2023.