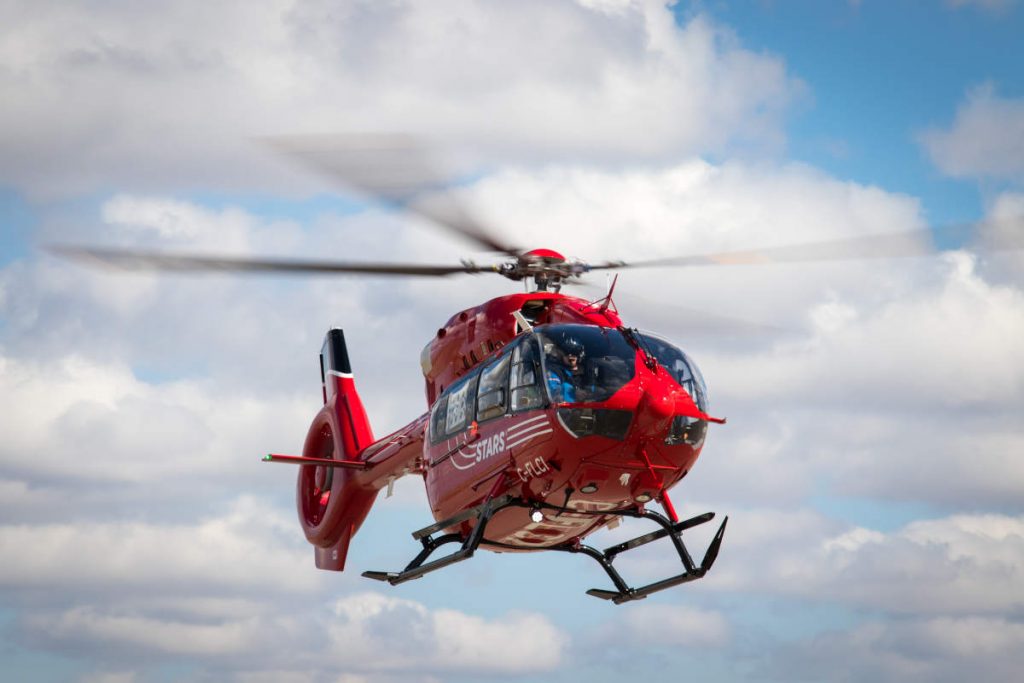 One of STARS’ new Airbus H145 helicopters arrives at the air ambulance’s operational base in Calgary. (Photo: Lyle Aspinall/STARS)

STARS Air Ambulance took delivery of its first two Airbus H145 aircraft as part of its plan to replace its entire fleet in Western Canada. Shortly after the two new helicopters arrived at STARS’ base in Calgary, Alberta, the operation announced another $1 million donation and its new fundraising campaign chair.

“Today is about bringing us one step closer to making our fleet renewal program a reality,” said Andrea Robertson, president and CEO, STARS. “It is also about paying tribute to the aircraft that have served critically ill and injured patients across Western Canada for 34 years.”

To celebrate the arrival of its new aircraft, STARS flew in its very first patient, Kelly Waldron, and applied the registration marks “C-GKLY” – recognizing her first name – to one of the H145 helicopters.

STARS in June 2018 unveiled its multi-year plan to renew its current fleet of BK117 and AW139 helicopters with nine Airbus H145 aircraft, with an estimated cost of $13 million each, medically equipped. “The bulk of our fleet — the BK117 helicopters — are no longer being built and are becoming costlier to maintain,” said Robertson. “Independent assessments of the sustainability of our fleet told us we needed to move from two aircraft types to one.”

RELATED: Anywhere we are needed, life as a STARS pilot

Most recently, STARS received a $1 million donation from James Richardson & Sons, Limited and Affiliated Companies. Richardson company representatives on April 26 gathered in Winnipeg, where the organization’s head office is located, to announce the donation.

“An abundance of our business locations are situated in rural areas across Western Canada, and knowing that a STARS air ambulance is at the ready should the unimaginable occur, provides us an immeasurable degree of peace of mind,” said Hartley Richardson, president and CEO of James Richardson & Sons.

With its first mission in 1985, STARS now operates 24/7 from bases in Calgary, Edmonton, Grande Prairie, Regina, Saskatoon and Winnipeg. The H145 is the newest member of the Airbus’ 4-ton-class, twin-engine rotorcraft product range. To date, the global H145 fleet has achieved more than 100,000 flight hours since entry into service in 2015, with more than 200 units delivered.

“The H145 family of aircraft has built a reputation as a proven and flexible solution for emergency medical services,” said Romain Trapp, president of Airbus Helicopters Canada. “We are humbled and proud to deliver the first of many high performance H145s to STARS, supporting life-saving missions across Western Canada.”