July 29, 2008, Oshkosh, WI - EADS Socata announced that the new Garmin Synthetic Vision Technology (SVT) will be offered as an optional feature on the new G1000-equipped TBM 850. 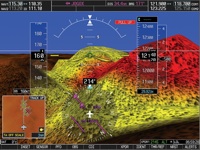 July 29, 2008, Oshkosh, WI – EADS Socata announced that the new Garmin Synthetic Vision Technology (SVT) will be offered as an optional feature on the new G1000-equipped TBM 850.

The Garmin Synthetic Vision Technology (SVT™) consists in a system upgrade of the Garmin's All-Glass Integrated flight Deck. The SVT presents a 3D depiction of terrain, obstacles and traffic on the G1000's Primary Flight Display (PFD) so that the avionics panel replicates what pilots would see outside the cockpit on a clear day.

Garmin’s SVT blends information about the aircraft’s position with topographic databases to create and display real-time 3D images. The information is presented on the G1000’s large flight displays with XGA (1,024×768-pixel) resolution. Land, water and sky are clearly differentiated with shading and textures that are similar to the topographical colors found on the multi-function display (MFD) moving map. SVT displays terrain and obstacles which pose a threat to the aircraft with appropriate Terrain Avoidance Warning System (TAWS) alert coloring.

“Garmin’s SVT brings an unprecedented level of integration and awareness to pilots of G1000-equipped aircraft,” said Gary Kelley, Garmin’s vice president of marketing. “SVT transforms the cockpit by accurately displaying synthetic terrain, flight hazards, flight path marker and highway-in-the-sky on the PFD so that the pilot maintains excellent airborne situational awareness even when flying in conditions of reduced visibility or darkness. This results in reduced pilot workload and safer flying.”

"The excellent partnership we have developed with Garmin is for the full benefit of our customers in getting the latest evolution of the G1000 as they come along. We are glad to provide them with the SVT that is an enhancement in safety," said Nicolas Chabbert, President of EADS Socata North America.

SVT will be offered to our new or already delivered G1000-equipped TBM 850 as an option and is anticipated for delivery this fall. Customer can have a pick on how it looks when visiting our booth,” he concluded. In addition, EADS Socata will offer to its G1000-equipped TBM 850 customers an extended warranty program from Garmin called FliteLevel The program basically extends the warranty of the Garmin G1000 equipment after the 2-year standard warranty to five year.  The coverage can be specified for parts only or for parts and labor.  In addition to providing coverage after the initial OEM/Garmin warranty runs out, it also provides certain additional benefits while the airplane is in original warranty.

The TBM 850 is world’s fastest single turboprop aircraft, with a maximum cruising speed of 320 KTAS at flight level 260 (in ISA conditions). It combines cruising speed and trip times of a light jet with the economic direct operating costs, range and moderate environmental signature of the turboprop engine. Its maximum range and useful load, enhanced on the new model, its ability to land on small airports are some of its customer’s favorite features.