If you thrive on stress and love a work environment that is constantly in flux, then this is really a good time to be in the corporate aircraft charter business in Canada. 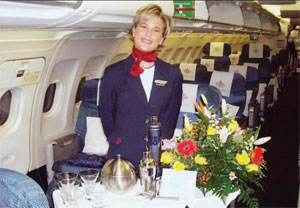 If you thrive on stress and love a work environment that is constantly in flux, then this is really a good time to be in the corporate aircraft charter business in Canada. The number of service providers has remained relatively the same over recent years, but two significant things have changed – the number of people turning to charter as their travel option, and the increased numbers of corporate aircraft available.

Why is the charter world so busy? The simple truth is that this form of transportation has proven itself to be the best for many Canadian corporations and individuals. The answer would seem to lie in the simple fact of “control.” One element of this is time management while another is a much better sense of personal security. Use of a corporate charter insures control over both these elements and increasingly it is becoming more reasonable to travel this way than with the commercial alternatives. That alone is driving demand for charters at a growing rate.

One equally important part of the recent success of charter use in Canada is the availability and broader range of options that have come to market in the last few years. Because we were as conservative as possible in this country, in the past the majority of charter aircraft available tended to be small to midsized aircraft with only the odd larger one. They also tended to be centred at three or four hub airports.

Charter operational success or failure is based largely upon customer service – and in this market everyone seems to lay claim to providing it. But as one client who has used just about all the various charter options recently stated, Vancouver-based London Air Service is the one to beat when it comes to service. Its Lear 45 and Challenger 604 fleet (the 604s slated to be replaced in the coming year or so with 605s) are all modern, very nicely appointed and maintained to a high standard of cosmetic detail. In addition, staff is attentive and highly focused on customer details. The aforementioned client went on to say that should London Air ever set up shop in the east, it would give the other operators a real run for their money. While this may sound like a simple personal opinion, it hits the charter nail square on the head – the service is personal, so the experience that clients have will largely dictate if they use the provider again or not. Add to that the fact that there are options now – and many more than a few years ago – so getting a charter customer is one thing. Turning him/her into a loyal client is quite another. Food service, baggage handling and FBO personnel can help add or detract from the charter client’s satisfaction. And at the rates being charged, things simply have to go well. This market is truly the ultimate service-driven product and careers can be made or broken with a comment, omission or slip. So the folks who work in the charter world are attentive, well trained and focused. Those who do not make the mark are weeded out either by the client or their peers.

All that said, the major charter houses are all reporting double-digit growth in the amount of charter hours they flew last year as well as this year so far. Lyn Shin, director of charter sales with Skyservice, echos what most of the larger providers report – sales have increased more than 20% over the last fiscal year. To help this along, Skyservice has added 10 new aircraft in that time and now has six bases of operation – three new bases in eight months alone. Looking down the road, Shin is optimistic that the charter business will grow a minimum of 20% in the coming year. The focus will be on Western Canada but the longer-term plan is to build a strong network of aircraft across Canada.

Shin observes that the Canadian market is not overserved at present. In fact, she feels that demand is greater than the supply. To make its service offering truly international, Skyservice has chosen to form strategic alliances with some of the large US operators.

Adam Keller, president of Chartright Air with its head office in Toronto, reports a bit more conservative growth – 10-15% for each of the past four years. Similar growth is expected for the next two years. The fleet had a net increase of three aircraft last year and three more will be added this year.

Chartright currently operates from three bases – Toronto, Kitchener and Vancouver. The firm has really moved toward truly being international with the establishment of its fourth base at Moscow/Domodedovo.

Keller attributes the biggest positive influence on his business to frustrated passengers, looking for a better alternative to the airline experience. They continue to be a positive impact on the charter business, he says. He cautions though that unconventional charter schemes are at times confusing to passengers and can have a negative impact on traditional charter service.

Looking downstream, he feels that emerging government taxes and user fees will have a future and negative impact on charter service.

He also reports that webbased and electronic marketing has dramatically increased the reach of Chartright’s marketing dollar – and along with that the number of unique client contacts and quotes provided. However, he is finding that the clients who have surfaced through electronic initiatives are proving to have a far lower conversion rate (i.e., from quote to confirmed charter) as opposed to those clients reached through traditional methods of promotion. In Keller’s view, the ease and relative anonymity of contact allows potential clients to “cast a wider net” when seeking a charter flight.

Jetport calls Hamilton home and also operates seasonally from its golf course at Fox Harbour Resort in Nova Scotia. Roger Adair, director of operations, says year-overyear total revenue hours and total revenue have increased over 25%. Jetport has added four new aircraft within the past year. Immediate growth plans will see the introduction of a Global 5000 aircraft into service, along with two other recent additions, a Eurocopter TwinStar helicopter and a brand new executive-configured Caravan on amphibious floats. This brings the total fleet to 11 aircraft, most of which are directly owned by Jetport.

Looking at the industry as a whole, Adair says that one of his largest concerns is the continued increase in user fees in Canada, the US and Europe. As an example, he states that landing fees at Toronto’s Pearson Airport for Jetport’s Challenger is the highest that it has seen to date in North America. Other government departments are also getting in on the “cash grab” such as the US Department of Agriculture which is now charging a fee for small jet charter operators coming into the US. While these fees are passed on to the end user, Adair feels that there is a limit to what clients will eventually pay, and like Adam Keller, is concerned about the impact of this on future growth.

Anne Dinwoodie, director of flight services with Execaire, a division of IMP Group, reports 25% growth in business along with the addition of seven new aircraft to be utilized through six bases of operation. The biggest positive impact on business is the increasing number of individuals buying aircraft. This has added capacity during the growth that charter is experiencing right now. For its part, Execaire has embraced the electronic world; she notes that its customers have access to the only on-line customer care program and electronic billing in Canada. With the market underserviced in Dinwoodie’s opinion, the electronic and Web-based estimates and marketing have become an integral part of Exacaire’s sales and marketing efforts.

And if your charter is really on the big side, even Air Canada is willing to give you the corporate treatment. Working under the Air Canada Jetz name, it has several dedicated A320 aircraft with all-first-class, 60-seat interiors along with upgraded catering and cabin service. Used primarily by professional sports teams in major Canadian cities, these aircraft and their crews are specially selected from the AC rank and file with a view to optimizing service quality. Based upon reports from some corporate charter folks who have tried the service, it is like no other Air Canada flight they have ever been on. So obviously the big guys have realized that corporate charter is here to stay and they need to get a share of it.

Barring significant global events or fuel prices and user fees getting really out of hand, the charter market in Canada is looking good for today and well into tomorrow. But a year from now we will see again what everyone is saying.