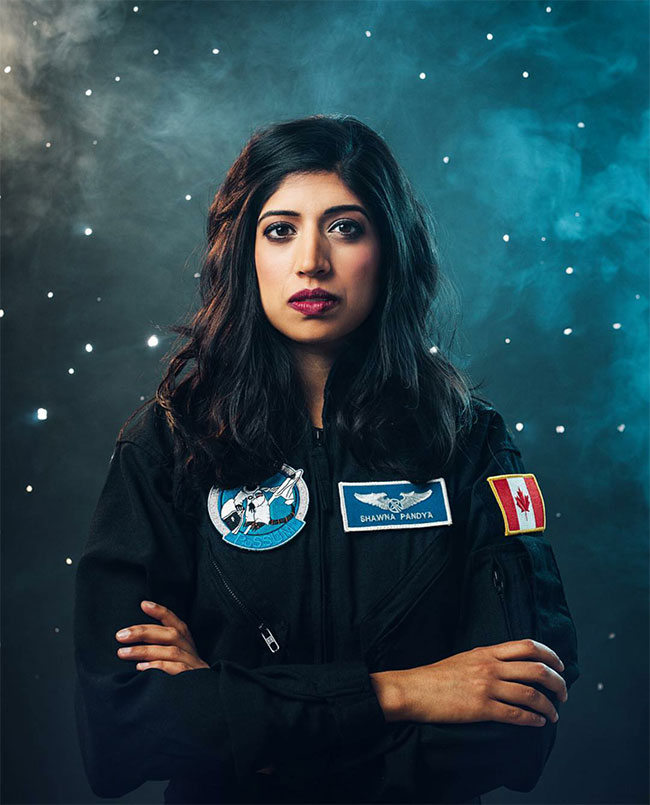 My love for flying was ignited during an aerospace medical rotation at NASA-Johnson Space Center, when I was lucky enough to meet Chris Hadfield.

I met Dr. Shawna Pandya a few years ago and she was one of those women who just stood out to me. “A citizen-scientist astronaut… what does that mean?” Pandya is also a physician, speaker, aquanaut and martial artist. Above everything else, she is an inspiration, as you can tell from our recent conversation.

What is day in the life of your career?
As a scientist-astronaut candidate with Project PoSSUM (Polar Suborbital Science of the Upper Mesosphere), physician and speaker, there is no real typical day. On any given day, I may be in a clinic or a rural emergency room, testing a spacesuit in micro-gravity on a parabolic flight, participating in a research campaign, or conducting a literature review for something space medicine related.

What was your biggest career hurdle?
Between medicine, space, research, flying, diving, speaking and everything else, I get asked about my hectic schedule and balance. But for me, everything I do is 100 per cent worth it and doesn’t feel like a sacrifice.

Who inspired your career path?
It was definitely inspired by Dr. Roberta Bondar, Canada’s first female astronaut. She is also a physician, pilot and neuroscientist, which really influenced my decisions to pursue an undergraduate degree in Honours Neuroscience and later on, medicine.

Was aviation your first choice?
I always wanted to be an astronaut growing up and pursued every avenue towards this goal. My love for flying was ignited during an aerospace medical rotation at NASA Johnson Space Center, when I was lucky enough to meet Chris Hadfield, while he was training to be Commander of the ISS. This meeting sparked my love of flying and convinced me to pursue my Private Pilot License.

Why do you love what you do?
I get to save lives by day and push the limits of knowledge and exploration by night. There are not many career paths in the world that allow you to wear both scrubs and spacesuits.

What career advice do you share?
Be curious. Ask questions. Develop the best work ethic of anyone you know – and then work really, really, really hard. And act like you belong here – because you do.

What’s your go-to stress relief?
I love working out, either at the gym or the do-jang. I genuinely believe in the term physical therapy, and my workout time is my decompression time.

What skills must someone have to be successful in your career path?
The key skills needed in both medicine and citizen-scientist astronautics are being a good team-player, having the ability to learn skills across multiple domains, keeping up with a busy schedule, a good work ethic, and having grit or stick-to-itiveness.’

Did you ever feel like giving up on such a unique career?
I have come to read and study a lot about psychological resilience, and have even written a book chapter on the topic as it pertains to long-duration spaceflight and isolated and confined environments (ICEs). I have learned that resilience is more a learned than an innate trait; and we all have the ability to build our mental resilience, which can be broken down into 5 key components: (1) mental rehearsal; (2) positive self-talk; (3) impulse control; (4) breaking things down; and (5) strong social support networks. When I run into tough times, I think of these components, and try to build on them. I am especially lucky in that I have a strong social support circle.

What is the biggest decision you have made over the past year?
I have started venturing into exploration of that other great unknown, ocean exploration – 95 per cent of our oceans remain unmapped. We have more imaging of the surface of the Moon than we do of the ocean’s floors. I completed a Dive and Hyperbaric Medicine course and obtained my Dive Medical Technician certification earlier this year and was lucky to spend a night at the Aquarius Reef Base, the world’s only remaining underwater research laboratory. In October of this year, I will be embarking on my first underwater research mission over five days at the Jules Undersea Lodge.

What are you the most proud of?
I never grew up thinking that I would be a role model for others. I simply had goals and set out to achieve them. That what I do inspires others to pursue careers they otherwise never would have dreamt of makes me incredibly proud and also excited for their future career paths.

Kendra Kincade is director of Elevate Aviation and an ATC with NAV CANADA.