Features Operations
The Liitle Engine That Could

What was once seen as a consolation prize to Pratt & Whitney’s Canadian operation has turned into a global success story. 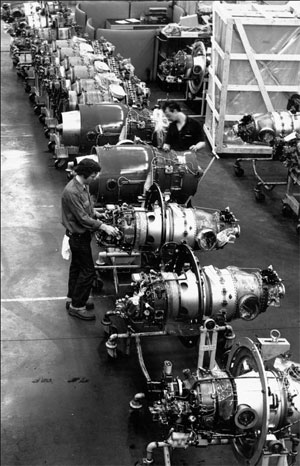 Many are the aircraft that are singled out for some aspect of their
flying career, but seldom is the same action taken with respect to an
engine. So we are leaving the well-worn path of tribute to an aircraft
to concentrate instead on an engine.

In
any history of powerplants, the Rolls-Royce Merlin would normally be
accorded top ranking, and few would find fault with that choice.
However, in the history of Canadian aviation the choice lies elsewhere.
It is not difficult to pinpoint this selection – the Pratt &
Whitney Canada turboprop PT6A.

To understand the genesis of this
engine it is necessary to go back to the 1920s when the American
company Pratt & Whitney established a service centre in Montreal
for maintenance of its engines being used in Canada. It turned out to
be a strategic decision that took on greater importance as Canada
entered the Second World War.

In 1958, P&WC was given the
go-ahead by its US parent to develop and manufacture the PT6. Seen at
the time as recompense by the American operation for taking control of
the Canadian-designed JT12 turbojet one year earlier, it was to become
a defining point in the Montreal operation’s future. The PT6 first
entered service with Beech Aircraft in late 1963, but it was likely the
de Havilland Twin Otter, more than any other aircraft, that cemented
the engine’s long-term success.

Over 40 years later the engine,
in its PT6A-C categories, is still very much in production and is used
for a wide range of requirements for military and commercial aircraft.
Some aircraft have even had the PT6 retrofitted to take advantage of
its power and reliability. Pilatus Aircraft has chosen the PT6A
powerplant in every one of its range of aircraft, from the famous
Pilatus PC6 Porter to the military trainers PC-7/9 and the allpurpose
P-12. The PC-21, successor to the 7/9 series, whose prototypes are
already flying, has continued this tradition, using a PT6A- 58B. When
the PC-9 was chosen by the USAF to be its primary trainer, which
required it to be manufactured by Raytheon in the US, the PT6A followed
it. The aircraft was subsequently chosen by Bombardier to be used in
its contract for similar purposes in the CF and today, known as the
CT-156 Harvard II, it can be found at CFB Moose Jaw.