The collapse of Jetsgo has disrupted the lives of 17,000 Canadians. Has Ottawa learned nothing from Canada 3000? 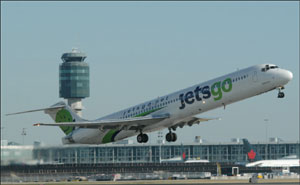 Not much has altered since Canada 3000 collapsed in 2002. Once again
the federal government was caught off guard (though with suspicions
over how much the transport minister knew and when he knew it), and
thousands of Canadians are either stranded or have had vacation plans
ruined on the eve of March break (a Toronto tabloid called it March
Broke). Maybe Jetsgo’s uncertain future was already sealed with the
slogan “Pay a little. Fly a lot.” Certainly the airline’s practice of
offering deep discounted fares contributed heavily to its $55-million
loss in eight months and its ultimate demise. “They’re pricing their
seats for cash instead of profit – which suggests they need cash to
survive the slow winter and spring seasons,” Torontobased UBS
Securities Canada analyst Fadi Chamaun told WINGS prior to the
collapse. McGill University business professor Carl Moore describes
Jetsgo founder and CEO Michel Leblanc as a “serial airline
entrepreneur.”

That
he is. In 1988, he launched Intair, a Quebec regional airline, which
was integrated into Canadian Regional Airlines in 1991. In 2001 he sold
his leisure airline Royal Aviation to Canada 3000 for $84 million.
Viruses that infected already poorly managed airlines. Critics say he
doesn’t know when to quit, but the conditions seemed right for his
return in September 2002, with three MD83s leased cheap, low operating
costs and a bag full of discount gimmicks such as two-for-one
promotions and return seats for a loonie. “Don’t forget that when he
started out, Air Canada was facing an uncertain future and WestJet
didn’t have much of a presence in Eastern Canada,” said Cameron
Doerksen, an analyst with Dlouhy Merchant Group in Montreal.

So what went wrong?

One
analyst who requested anonymity did not believe Jetsgo’s operating
model would be sustainable over the long term, and that the airline
could not continue to operate on a steady diet of high fuel costs and
seat sales. Michel Leblanc said he was bringing something new to the
market, telling WINGS’ One On One that, “if you don’t bring anything
new, why are you in the marketplace?” But analyst Jacques Kavafian of
Research Capital Corporation in Toronto argued that Leblanc did not do
enough, saying that he always goes after the discount market without
offering any of the perks. “What he should have done is offer a
full-service airline with food and drinks and TV monitors at discount
prices.” Jetsgo’s strategy to add up to 18 Fokker 100 aircraft to its
fleet of 160-seat MD83s has also drawn criticism. But was the strategy
wrong, or just the airplanes? While the addition of a second aircraft
type drives up operating costs, it is not clear whether a one-aircraft
strategy can work for a Canadian discount carrier that intends to serve
smaller markets outside of the larger city pairs. WestJet has struggled
with Boeing 737s that are too large for some markets, especially in the
Atlantic provinces. Whereas a common fleet of either Boeing 737 or A320
aircraft is standard practice for US and European low-cost airlines,
perhaps the Canadian market requires a two-aircraft model. Even in the
US, industry darling JetBlue Airways plans to use Embraer 190s on
routes not large enough to support its current fleet of A320s.

Despite
its difficulties and Transport Canada concerns over maintenance
practices, Jetsgo continued to confound industry observers with an
aggressive expansion campaign that appeared overly ambitious for an
airline that was already displaying signs of being stretched too thin.
In February the airline announced it was moving deep into WestJet’s
backyard with four new routes in Western Canada and the conversion of
two seasonal services to year-round. At least one analyst felt that
Leblanc might be returning to form and playing for a buyout from
WestJet. If that was the game plan, it was too late. At midnight on
March 11 the clock ran out. Jetsgo has been criticized for selling
tickets up until the last minute. It is difficult to see how it could
have done otherwise. To have suspended ticket sales one week or even a
few days early would have accelerated the bankruptcy. The greater
concern is the fraud that was committed by an airline that advertises
new routes and seat sales on services it likely knew would never fly.

And
where was the federal government in all of this? The signs of Jetsgo’s
demise were everywhere. In its January/February issue, WINGS reported
on Vancouver-based Raymond James analyst Ben Cherniavsky’s opinion that
Jetsgo had run out of money and would soon be out of business. Surely
Transport Minister Jean Lapierre or his staff picked up on some of the
chatter. Even if Ottawa was caught unaware (surely the minister also
makes routine telephone calls to airline executives to gossip over the
potential bankruptcy of competitors?), the government’s response to the
collapse of Jetsgo has been woefully inadequate. Canadians will
indirectly pay Ottawa $268 million in airport rent this year. It
collects $234 million more in air security tax than it spends on
security. It is not unreasonable to expect the government to show an
interest, by developing a framework that promotes a healthy air
transport industry while protecting the consumer’s interest. A good
start would be regulating airlines to deposit money from
advanced-purchase sales into a trust account. The revenue would not be
released until the airplane takes off. Enlightened provinces such as
British Columbia, Ontario and Quebec already have travel protection
funds for consumers who book flights through a travel agent. That model
has to be expanded to include internet sales. Both consumers’ groups
and the travel industry pressed for such a safeguard in the aftermath
of Canada 3000’s bankruptcy. Fortunately, creditcard companies have
stepped in where the federal government has failed to act. At the very
least, Ottawa must return all tax money associated with each Jetsgo
ticket and compel airport authorities and Nav Canada to do the same.

And
what of the future? Jetsgo is dead, the trademark smile wiped
permanently off the tails of its ageing gas guzzlers. But can Leblanc
make a comeback? Conventional wisdom would say no. But nothing should
come as a surprise in an industry with only two constants: airlines do
go bankrupt and a Liberal government will continue sitting on its ass.