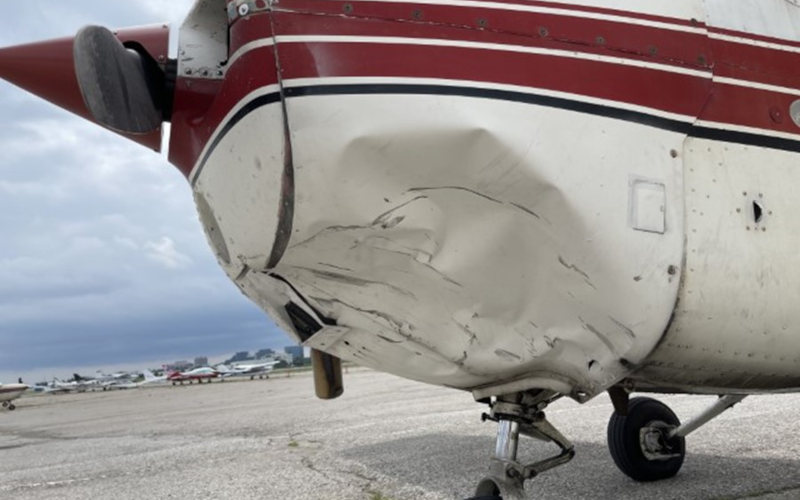 The Transportation Safety Board of Canada released its investigation report (A21O0069) into the August 2021 collision between a drone and a small aircraft that took place near the Toronto/Buttonville Municipal Airport in Greater Toronto.

On August 10, 2021, a Cessna 172N aircraft operated by Canadian Flyers International Inc. was on final approach to the Buttonville Municipal Airport, with a student pilot and flight instructor on board, when it collided with a York Regional Police DJI Matrice M210 remotely piloted aircraft (RPA) operated by a pilot located on the ground and a visual observer.

Following the collision, the Transportation Safety Board (TSB) explains the Cessna aircraft continued the approach and made an uneventful landing. After parking the aircraft, damage on the front left cowl under the propeller was observed, explains the TSB, but the York Regional Police RPA was destroyed. There were no injuries to either pilot on the Cessna 172N or to persons on the ground.

The TSB investigation found that the Cessna pilots were unaware of the presence of airborne RPA traffic in the vicinity and, due to several factors, the active scanning that is part of the see-and-avoid principle was unsuccessful in identifying the conflict. Additionally, TSB notes York Regional Police policy does not require that visual observers be trained crew members, and the RPA pilot did not brief the visual observer on his role and responsibilities before the operation.

As a result, TSB reports the visual observer was not aware of the requirement to maintain visual line-of-sight with the RPA, nor was he trained in visual scanning techniques or aircraft identification. Finally, TSB notes the RPA pilot was tasked with operating the camera system, monitoring the status of the RPA, and communicating on multiple channels. As a result, TSB explains he likely became task saturated, restricting his ability to visually monitor the RPA and hear radio calls on the control zone’s mandatory frequency and the sound of incoming aircraft, both of which preceded the collision. As a result of these factors, TSB concludes the conflict went unrecognized and the two aircraft collided.

Following the occurrence, TSB explains York Regional Police amended its directive to include the addition of a pre-flight risk assessment tool, and an updated RPA pilot checklist. There is also additional guidance for the role of the visual observer, explains TSB, including a quick reference card outlining their roles and responsibilities, as well as a requirement to have a visual observer present for all operational RPA flights.