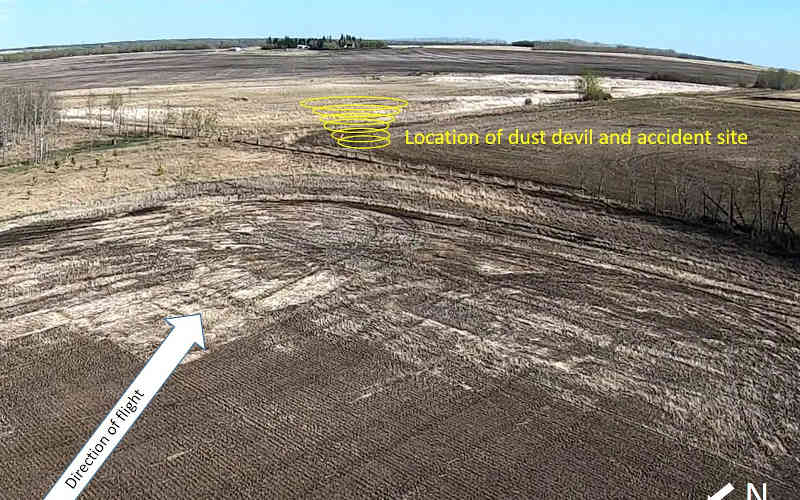 A still image from the pilot’s helmet video, recorded approximately three minutes before the accident, shows the location of the dust devil and the accident site with TSB annotations. (Image: TSB)

The Transportation Safety Board of Canada (TSB) on October 28 released its investigation report (A20W0035) into the May 13, 2020, fatal collision with terrain involving the pilot of a powered paraglider and a dust devil in Gibbons, Alberta, near Edmonton. TSB explains dust devils are common in Alberta and are more prevalent during warm sunny days with low ambient humidity, where localized heating occurs in dry bare soil. In such conditions, TSB explains localized rotating updrafts may be created and are only visible if there is loose material on the ground to highlight it, such as dust, sand, straw, or snow.

The aircraft involved in the May 13 fatal accident was a RS Ultra Kangook MF Paramotor powered paraglider, which was registered with Transport Canada as a basic ultralight and was equipped with an APCO Vista HP S canopy. A post-accident examination of the canopy, suspension and control lines, trike, and engine were completed, explains TSB, stating no anomalies were found that would have contributed to the loss of control.

The RS Ultra Kangook MF (registration C-ILQJ, serial number 463) was conducting a local recreational flight from a private field 4.5 nautical miles northwest of Gibbons. The accident occurred during the pilot’s second flight of the season and of that week. After completing the pre-flight inspection, TSB explains the pilot at around 3:15 pm local time departed the field in a southeasterly direction, flying locally within one nautical miles of the field for approximately 25 minutes.

The entire flight was captured on a video camera attached to the pilot’s helmet, which TSB used extensively for its investigation. One minute before the accident, TSB reports the pilot performed an approach to the take-off area in a southeasterly direction. Just before touchdown, power was applied and a go-around to the south was commenced. When it was approximately 75 feet above ground level, the aircraft flew through a dust devil. Without input from the pilot, the aircraft’s climb rate suddenly increased, explains TSB, as the aircraft rolled sharply to the right, and the paraglider lines wrapped around the pilot, the trike, and the turning propeller, eventually collapsing the entire canopy. At approximately 3:45 pm, TSB reports control was lost and the aircraft impacted the ground, fatally injuring the pilot.

The pilot held a pilot permit – ultra-light aeroplane that was restricted to powered parachutes only. TSB explains he was issued the permit by Transport Canada on December 2, 2019, after completing his training during the summer of 2019. During his training, he had completed 20 hours of ground school, 10 hours of solo flying, and 49 takeoffs and landings, including normal and emergency manoeuvres. The pilot had carried out his training on the occurrence aircraft. The investigation could not determine the total number of paraglider flying hours the pilot had.

The weather conditions immediately before and after the occurrence flight were consistent with visual meteorological conditions, explains TSB. The closest aerodrome forecasts (TAFs) and aerodrome routine meteorological reports (METARs) that were available for planning purposes before the flight were from Edmonton/Namao Heliport (CYED), Alberta, located at CFB Edmonton, approximately 16.4 nautical miles south-southwest of the accident site.

TSB explains a windsock located on the fence line at the south end of the field being used for operations was observed at various times in the video recording of the 25-minute flight. The wind direction was variable, ranging from 135°T to 285°T, but TSB notes wind velocity was harder to establish as the wind sock was not a standard aviation type. When fully extended, TSB explains the windsock represents a minimum wind speed of about 5 knots. During the occurrence flight, the windsock was fully extended most of the time when it came into view in the video.