Features Operations
Under the Media Gaze 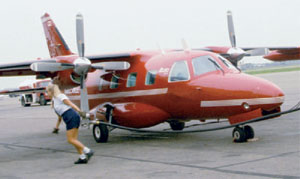 The papers and broadcast media have been awash with stories over the
last few months related to how safe – or unsafe for that matter – a
longstanding, turbine-powered aircraft may or may not be. Incidents
involving Mitsubishi Heavy Industries MU-2 in its various models have
drawn everyone from former operators to members of the US Congress into
the spotlight of discussion.

The
result is that the aircraft has come under scrutiny leading to
recommendations and operational reviews for owner- /operators by the
folks who govern what, how and when we fly. But is this review based
upon facts that warrant such probing, or on public hysteria and
aluminum overcast syndrome? While that is an individual issue, a review
of the facts does allow an unemotional and independent assessment.

A
product of the ‘60s, the MU-2 was a firstgeneration, purpose-designed
corporate aircraft. It seats six with comfort and nine at the maximum
and is well known for its short, high-mounted wing, round fuselage and
tip tanks. As for performance, the MU- 2B in 1967 boasted a cruise
speed top end of 315 knots and short-field design with the ability to
use 2,000-foot sod strips when operating at lighter weights. Because
the wings are short and the overall aircraft design short and stubby,
the MU-2 is not an easy aircraft to fly – it is in fact more sensitive
than many other aircraft with regard to pitch and in trim. This has
meant over the years the aircraft has become no stranger to headlines.
Pilots either love it or hate it – no grey zone here. US National
Transportation Safety Board (NTSB) numbers show the MU-2 has been
involved in 11 accidents in the last two years, in which a total of 12
people have died.

In late January of this year, the NTSB issued
a report and review of the MU-2. This is the third time that the
FAA/TSB have reviewed the aircraft and its performance characteristics.
The first investigation, in 1981, was not publicized and was conducted
by the Federal Aviation Administration to examine the approach handling
qualities of the airplane. The second investigation, in 1984, was a
special certification review conducted by the FAA at the request of the
NTSB. After nearly 70 hours of test-flying, much of it in icing
conditions, the FAA found in the ’84 report that the MU-2 does comply
with the regulations and nothing was found in flight testing, accident
analysis or examination of systems and structure that was outside the
rules or would lead to accidents.

This latest review was
undertaken after several members of Congress from Colorado asked for
the airplane to be grounded, following two fatal crashes at Centennial
Airport just south of Denver. In the past two decades, eight MU-2B
planes have crashed in Colorado, the nation’s second-highest number of
reported accidents after Texas, according to NTSB. Two of the Colorado
accidents were fatal, causing a total of 12 deaths. There are over 400
MU-2 aircraft in service outside Japan and approximately 350 of them
are operating in North America – and worldwide the estimate is that
about 400 are flying incident-free.

In the January 2006 FAA
report on the MU-2B, the numbers show that when compared to similar
twinturboprop airplanes, the MU-2B holds an accident rate record that
is about twice as high as other aircraft. The numbers also show that
the fatality rate is about 2.5 times higher and that in spite of the
1984 report, fatal accident rates in icing conditions are four times
higher. Statistically, a pilot is seven times more likely to lose
control and have a fatal accident with an MU-2B during an emergency as
compared to pilots flying similar airplanes in similar situations. The
bottom line, though, is that because the airplane is complex and
high-performance, the FAA has stated that pilots and maintenance
workers need better training to properly handle and fly it – but they
once again stopped short of grounding the fleet.

So why is the
MU-2 so accident-prone and newsworthy? Looking again to the latest FAA
report, the use of the MU-2B by and large has changed from its original
focus of corporate aircraft to cargo, private GA-type flying and in
some cases medevac. So while the aircraft was originally operated by
corporate pilots and maintained to such standards – subject to
recurrent training and strict operations guides along with carefully
dictated maintenance policies and procedures – it is now more likely to
be in the hands of pilots who may tend to have less experience in
high-performance airplanes. The FAA report also points out that in
addition to the pilot/maintenance provider shift, usage of the aircraft
now exposes them to more frequent night-flight operations. The
Associated Press has reported that the company stands behind the
aircraft’s safety record when it’s used properly – but stresses that
MU-2 aircraft operators need to be trained according to the
manufacturer’s flight manual procedures, which have been in place for
decades to maintain safety standards.