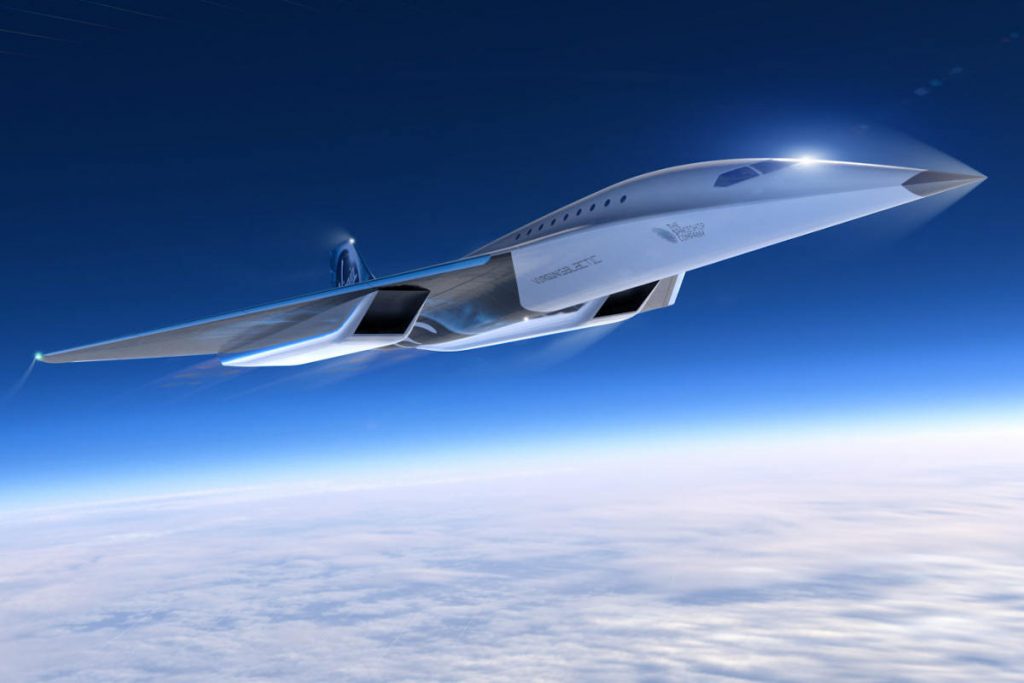 Basic parameters of Virgin Galactic’s initial high-speed aircraft design include a targeted Mach 3 certified delta-wing aircraft that would have capacity for carrying nine to 19 people at an altitude above 60,000 feet. (Image: Virgin Galactic)

Virgin Galactic Holdings Inc. on August 3 announced the completion of a Mission Concept Review program milestone and unveiled the first stage design for its planned build of a high-speed aircraft aimed at commercial travel. The company also announced it had reached a non-binding Memorandum of Understanding (MOU) with Rolls-Royce to collaborate in designing and developing engine propulsion technology for the high-speed commercial aircraft.

“We are excited to partner with Virgin Galactic and [its advanced aircraft-building subsidiary, The Spaceship Company,] to explore the future of sustainable high-speed flight,” said Tom Bell, chairman and CEO, Rolls-Royce North America. “Rolls-Royce brings a unique history in high-speed propulsion, going back to the Concorde, and offers world-class technical capabilities to develop and field the advanced propulsion systems needed to power commercially available high-Mach travel.”

The unveiling of this new aircraft design follows authorization from the Federal Aviation Administration’s (FAA) Center for Emerging Concepts and Innovation to work with Virgin Galactic to outline a certification framework.

“We are excited to complete the Mission Concept Review and unveil this initial design concept of a high-speed aircraft, which we envision as blending safe and reliable commercial travel with an unrivalled customer experience,” said George Whitesides, chief space officer, Virgin Galactic. “We are pleased to collaborate with the innovative team at Rolls-Royce as we strive to develop sustainable, cutting-edge propulsion systems for the aircraft, and we are pleased to be working with the FAA to ensure our designs can make a practical impact from the start.”

The Mission Concept Review (MCR), which included representatives from NASA, is described as an important program milestone in which the Virgin Galactic high-speed team confirmed that, based on the research and analysis work completed, its design concept can meet the requirements and objectives of the mission. Previously, NASA signed a Space Act Agreement with Virgin Galactic to collaborate on high-speed technologies.

Virgin Galactic states the basic parameters of its initial high-speed aircraft design include a targeted Mach 3 certified delta-wing aircraft that would have capacity for nine to 19 people at an altitude above 60,000 feet. The design would also be able to incorporate custom cabin layouts to address customer needs, including Business or First Class seating arrangements. The aircraft design, explains Virgin, also aims to help lead the way toward the use of new sustainable aviation fuel.

The MCR concluded, according to Virgin Galactic, that the team can progress to the next phase of design, consisting of defining specific system architectures and configurations, and determining which materials to use in the design and manufacturing of the aircraft. The team will also work to address key challenges in thermal management, maintenance, noise, emissions, and economics that routine high-speed commercial flights would entail.