It is starting to get a bit crowded at Vancouver International Airport, Canada’s busiest and a consistent chart topper in global rankings as one of the best airports in the world. A record 22.3 million passengers streamed through YVR in 2016, a year-over-year increase of almost 10 per cent, with growth coming across the board. 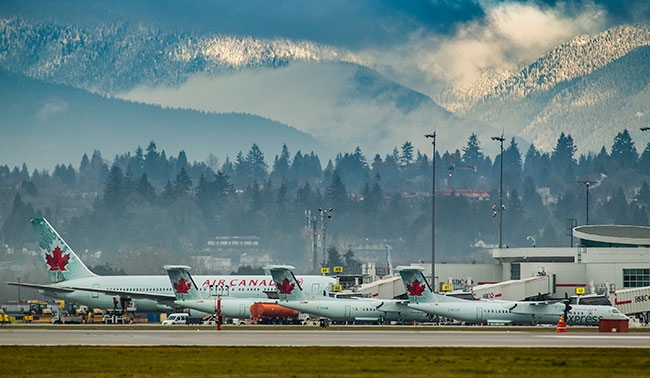 Traffic growth at YVR for the first six months of 2017 is on pace with 2016. It is starting to get a bit crowded at Vancouver International Airport

With new international and transborder destinations being added, most significantly by Air Canada, YVR is on track for another banner year. Traffic growth for the first six months of 2017 is on pace with 2016, including a record breaking 25.2 per cent spike in the Latin America market, largely attributed to the removal of tourist visas for Mexican visitors.

“It has been an exciting first half of the year for YVR with the addition of nine new services since January,” said Craig Richmond, the airport’s chief executive. “We expect this momentum to continue through the latter half of the year as Air Canada continues expansion of their transpacific hub out of YVR, and we see our tourism sector grow in markets like Mexico.”

“We will likely need a new terminal in the future,” Anne Murray, YVR’s vice president for marketing and communications told Wings. “What this plan does is outline what is going to happen at YVR for the next 20 years. It is a very flexible, adaptable and incremental approach to meet demand as it approaches. We can build in smaller pieces and better utilize the existing terminal.”

“Quite frankly, we’re running out of space for international carriers,” Richmond told reporters at the launch of Flight Plan 2037. Expansion of the international pier will be followed by adding capacity to the transborder area.

One of the first airports to be commercialized and spun off to a local, not-for-profit operating authority in 1986, YVR has long been a trail blazer and innovator for Canada’s $34 billion airports industry. It was the first to introduce a passenger terminal fee to support expansion, has been a Canadian pioneer in growing non-aeronautical revenue and the first airport to connect with its downtown core by rail.

YVR invested $300 million in the Canada Line, a multi-stop light rail system. The Canada Line carried 2.88 million passengers in 2016, one of the highest airport transit riderships in North America, and reducing greenhouse gases around the airport by 30 per cent.

YVR’s proprietary next generation Border Xpress system to speed up border clearance (see, Wings On the Fly, May-June 2017) has been exported to the U.S., and the authority rode an early wave of global airport privatization through its subsidiary, Vantage Airport Group. YVR sold its final 50 per cent stake in Vantage in 2016.

Interestingly, the airport is opposed to domestic privatization, and has joined with Calgary and Ottawa international airports to urge Canadians to resist any potential selloff by the federal government. “We have been actively engaging with all levels of government to maintain the current Canadian airport governance model,” Richmond said.

“It’s not that privatization is bad, it’s not what is required or suitable for Canadian airports at this time,” Murray adds. “We’ve seen the benefits over the past 25 years of having a not-for-profit company operate here in Vancouver and elsewhere in Canada. In our analysis, selling airports off to raise money for government will increase prices for consumers, passengers and air carriers.”

Earlier this year, YVR was voted Best Airport in North America for an unprecedented the eighth consecutive year at the Skytrax World Airport Awards. The latest Skytrax award was added to a trophy case that includes a 2016 Airport of the Year award by the CAPA Centre for Aviation, for its contribution to advancing the progress of the aviation industry.

Expansion of the international and transborder areas will be critical to maintaining YVR’s position as a sustainable hub between Asia, Canada, the U.S. and South America. Murray noted that YVR has many unique marketing advantages, including geography, which is likely the strongest calling card outside of the airport itself. “If you draw a string across the great circular route, Vancouver has a strong geographic advantage over other North American airports,” she said.

Air Canada, which accounts for almost two-thirds of YVR’s passenger growth over the last two years, has been aggressively to the U.S. from Vancouver, in part to support its transpacific growth strategy. Many routes would not be viable without a healthy injection of passengers from points in the United States.

“You look at Air Canada’s growth at YVR and what you see is the hub in action,” Murray explained. The clearest example is Air Canada’s daily Boeing 787 service to Brisbane, Australia. The aircraft continues to Newark, N.J., giving New Yorker’s the fastest service to the Australian business hub and tourism gateway. “Basically, we’re able to offer service to Australia and to the U.S. East Coast on the same aircraft,” Air Canada chief executive Calin Rovinescu told the Greater Vancouver Board of Trade last spring.

In the last year, Air Canada has launched new services to Taipei, Melbourne (seasonal), Frankfurt, Nagoya (using Rouge equipment), Boston, Chicago and Dallas. “Air Canada is a huge reason for YVR’s ongoing success,” Richmond told Business in Vancouver. WestJet, which launched Boeing 767 service to London Gatwick last year is expected to introduce transpacific services out of YVR when it takes delivery of its 787s beginning in 2019.

Other recent developments include China Southern Airlines’ launch of a service between Guangzhou and Mexico City via YVR, China Eastern Airline’s new route to Nanjing, Hong Kong Airline’s inaugural North American route, the expansion of seasonal service to Reykjavik by Icelandair to year-round, a return of British Airways A380 flights during the busy summer period and Cathay Pacific increasing its double-daily flights to Hong Kong to 17 flights a week bringing the first Airbus A350 aircraft to Canada. (YVR has an office in Hong Kong to market the airport to Asian operators.)

In 2016, YVR strengthened its hand by launching ConnectYVR, a new rate structure that slashed terminal and landing charges by an “industry-beating” 15 per cent, making YVR’s fees the lowest among Canadian and U.S. competing airports, and reducing ground handling fees. “By incenting airlines to grow . . . we can continue to attract new airlines to YVR and position ourselves as a major international hub in the increasingly competitive aviation industry,” Richmond said.

ConnectYVR has been helped along through increases in non-aviation related revenue, including the export of Border Xpress and a designer outlet centre featuring discounted European luxury goods located on airport lands. Total non-aeronautical revenue at YVR have grown marketedly over the past five years, accounting for a healthy percentage total airport revenues. “Part of the customer experience is to provide good products, good selection and good pricing. Passengers are very interesting in shopping at YVR,” Murray said.

Absent from Flight Plan 2037 is additional runway capacity. Indeed, YVR does not see the need for a fourth runway for the next 20 years, although Richmond told the Vancouver Sun that, “runways remain the ultimate capacity arbiter of any airport.” (The Fraser River also serves as a runway to support YVR’s float-plane activity.) Public support for a new runway is evenly divided between for, against and undecided.

According to the International Air Transport Association (IATA) traffic in the Asia-Pacific region will increase 89 per cent to 7.2 billion passengers annually 2035. If YVR does have a barrier to capturing more of this growth, it may come from capacity constraints at other airports. During his speech to the Greater Vancouver Board of Trade, Air Canada’s Rovinescu noted a lack of slots at Beijing Capital International Airport, the world’s second busiest. Other airports such as Singapore and Hong Kong are operating near or above capacity. With prudent planning and the flexibility of Flight Plan 2037, YVR is not expected to be one of them.