Features Airlines
Air Canada a Year Out of CCAA

September 27, 2007
By Rick Erickson
The juggernaut spools up 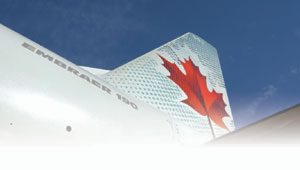 Air Canada reported a net income of $270 million for its 2005 third
quarter. It had been 13 months since the carrier exited CCAA bankruptcy
protection: judging from its financial results, a productive year. ACE
Aviation Holdings, as the new corporate structure is traded, has
reported a net income of $443 million over the past four consecutive
quarters. Cash on hand is an impressive $2.5 billion.

Considering
that you could have bought the entire Air Canada franchise for
something less than $100 million in 2004, ACE Holdings has a current
market capitalization of $2.6 billion – greater than the market cap of
all of the beleaguered US majors combined. Also noteworthy has been
ACE’s ability to raise new equity – $1.9 billion over the past year,
and this from a domestic and international investor community that
cannot be characterized as being overtly friendly in today’s tough
aviation environment.

Completing its massive restructuring
process has resulted in a dynamically changed carrier that all other
legacy airlines worldwide will need to emulate if they have any hope
for survival. The process involved renegotiated labour agreements
resulting in lower costs alongside significant productivity
improvements (labour contracts are in place through 2009); $7 billion
in debt was removed from its balance sheet (current debt, including
aircraft leases, is a manageable $5 billion). The carrier also reduced
its aircraft lease obligations and other third-party vendor agreements.

To
compete in the new low-fare environment Air Canada has substantially
redesigned its distribution platform, based heavily upon internet
sales. The new website is transparent; consumers can clearly depict the
value equation as they buy up the price chain. In the past customers
generally relied upon the vagaries of what the reservations or travel
agent had to offer on the other end of the line. Not so now; with a few
clicks of the mouse a consumer can view all of the price and product
options available at virtually any carrier in the country. Air Canada
has learned a transparency lesson from the lowcost carriers, which has
paid sizeable dividends in terms of regained customer trust and value.
When the value equation is placed alongside the carrier’s substantive
network, flight frequency, Aeroplan benefits and alliance partner
advantages, one can see why customers display loyalty.

Look at
Air Canada’s string of 19 months of record load factors. In part this
success is based upon the carrier ending its decadeslong practice of
chasing market share. Air Canada has finally aligned capacity with
demand and as a consequence is reporting system-wide load factors at an
unheard-of 82% on a year-round basis.

In the old legacy-carrier
days such load factors suggested that a dreaded ‘spill’ was occurring –
spill being passengers unable to find seats, especially on highdemand
flights, who migrate to other carriers with their revenue lost. At such
high load factors, one suspects this phenomenon continues to occur,
until one reviews the load factors of Air Canada’s chief domestic
competitor, WestJet. Odd – its annual load factors are fully 10 points
behind the national airline. Apparently there isn’t much spill
happening here. Kudos to the folks working in Air Canada’s scheduling
and marketing departments.

This fall Air Canada launched a new
subscriptionpurchase option. Much like the ubiquitous transit passes
found in most cities, one buys unlimited travel on the airline’s
various networks (domestic, transborder or international) for a given
period for a fixed, all-in price. Subscription purchase translates into
known revenue streams for the airline; passengers benefit from
convenience. It is novel to say the least, and as yet unproven. Plainly
it depicts “out of the box” thinking. Industry observers will be
watching this closely.

Robert Milton, CEO of ACE, has called
them game breakers‚ and I think he is right. Air Canada/Jazz have begun
deploying their newly acquired fleet of regional jets: 15 Bombardier
705s (70 seats); 15 Embraer 175s (73 seats); with 45 Embraer 190s (93
seats) just starting to arrive now through late 2007. It is a misnomer
to call these aircraft regional jets. They are small transcontinental
aircraft with the legs to fly virtually any city-pair in Canada and
between smaller domestic centres and popular US destinations. The
Embraer aircraft in particular will set new standards for passenger
comfort and appeal. Indeed, this fleet will provide the airline with
the means to provide jet service in an increasingly fragmented market.
The impact of a smaller cabin to fill with lower trip costs could come
as an unwelcome surprise to the low-cost carriers. One suspects that a
good deal of Canada’s domestic market will be a dogfight between
WestJet and Air Canada/Jazz in 2006, as these aircraft are
progressively introduced into secondary markets. Most US and European
operators will be observing the deployment of this fleet with
considerable interest.

A recent binding labour mediation process
has resolved a longstanding internal pilot seniority dispute and adds
further to Air Canada’s parade of good news. If the carrier is to fully
realize its international revenue potential it requires the next
generation of fuel- and maintenance-efficient aircraft. Subsequent to
the pilot arbitration announcement, the airline has been able to
resurrect a previously announced order for 14 Boeing 787 Dreamliners
and 18 B777 aircraft. If one reviews the aggressive aspirations of Air
Canada’s international competitors, putting this fleet to work sooner
will be far better than later.

A year out of CCAA, Air Canada
has transformed itself into a loyalty carrier, adopting a new business
strategy to achieve sustained profitability in the highly competitive
low-fare environment. The airline has captured the bulk of the
country’s high-yield passenger traffic, alongside the significant
revenue base generated by the other ACE Holding ventures. This permits
the firm to sustain the current high fuel price, unlike its low-cost
competitors who remain near wholly dependent upon passenger revenues.
It is apparent that the company’s strategy is focused upon innovation.

The
new model appears to be working. The Air Canada franchise is in the
vanguard of where the world’s major air carriers need to go to survive,
much less prosper.