Where is the price of oil headed over the next 12-months? The crystal ball remains cloudy. At the annual Global Airfinance Conference in Dublin, Ireland in January, duelling experts predicted the cost of oil could hover around the US$40 a barrel mark for at least the next couple of years, or creep up to US$100 a barrel by spring. There is enough room between the extremes to drive a fleet of tanker trucks through. 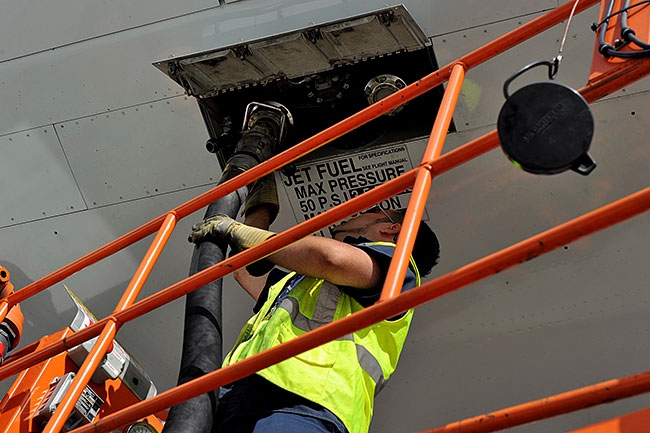 Bombardier expects lower oil prices to dampen business jet sales in the lucrative Middle East segment Where is the price of oil headed over the next 12-months?

There is one certainty: the current glut of oil will eventually be mopped up by demand and the price of oil will recover. How quickly or how high depends, unless the price dips further. All of which illustrates that the oil-dependent aviation sector is set for a volatile ride. It also may challenge conventional wisdom that operators will delay the capital cost of adding fuel efficient equipment in favour of holding onto their capital depreciated gas guzzlers a bit longer – or so Airbus and Boeing, with re-engined versions of the A320 and 737, and Bombardier with its clean sheet CSeries may hope.

Winners and losers are inevitable, albeit more difficult to sort out in Canada where the benefit of plunging oil is offset by a battered “petrodollar” headed in the same direction. WestJet calculates that every one cent drop in the value of the dollar equals $15 million in increased operating costs. Nobody should be surprised if the fuel surcharge is erased and replaced by a currency surcharge.

The Montreal-based International Air Transport Association (IATA) predicts that average return air fares (excluding taxes and surcharges) will fall by approximately 5.1 per cent over 2014, with cargo rates dropping slightly further. That is based on an average cost of US$99.99 a barrel when airlines fill up the tanks. The cost per barrel has fallen to less than half that, but many airlines are straight jacketed by hedging decisions made when oil was at its peak. Also known as forward fuel purchasing, airlines will hedge a percentage of their future fuel requirement to protect against volatility. Hedging is expected to cost Delta Airlines US$1.2 billion in 2015, but the carrier still predicts it will pocket an additional US$1.2 billion in revenue from lower fuel prices. Air Canada will not detail its fuelonomics before it releases its Q4 results as Wings was going to press.

The practice is less in corporate aviation because operators lack the financial clout to lock in prices over the longer term. The benefit of lower fuel prices should be felt immediately within the general aviation and corporate sectors, which will likely result in more flying and new business for FBOs and charter operators.

Bombardier expects lower oil prices to dampen business jet sales in the lucrative Middle East region. The energy sector is the single largest customer for Bombardier business jets. In early December, Khader Mattar, Bombardier’s region vice-president of sales for the Middle East, Africa and Turkey told the National, an Abu Dhabi newspaper, that if the price of oil continued to drop it could result in decreased sales in the region.

Conversely, lower oil prices could reignite sales in the struggling light and midsize jet market according to Brian Foley, a New Jersey-based general aviation analyst. He notes that the smaller segment is “price elastic” and not aligned to commodities, which means more people are likely to fly when fuel prices are low and the economy is heating up.

Indeed, with more people flying, airlines are adding more flights as weak routes become profitable. The potential of a return to the bad old days of fares priced to snatch market share may be enough for Airbus and Boeing to protect fat order books for fuel efficient airplanes from the plunge. It is important that, even in an age of cheap gas, that the aviation industry does not throttle back on increasing fuel efficiency. IATA estimates fuel efficiency improved by 1.8 per cent in 2014 with further gains expected in 2015. The association believes that efficiency improvements could be accelerated by reducing five per cent of wasted fuel burn as a result of airspace and airport inefficiencies.

One of the biggest winners in 2015 could be ultra-low cost carriers (ULCC), including a potential startup in Canada (see, “On the Fly,” page 8), according to Foley. “Despite lower fuel costs, ticket prices so far have remained relatively unchanged. While this provides some short-term financial gain to airlines it also paves the way for new entrants. The door is open for a new breed of startup to emerge that uses cast-off, practically new aircraft the majors are ditching in favour of new, fuel-efficient models.” Lower fuel could be the jump start hesitant investors in a Canadian ULCC have been waiting for.