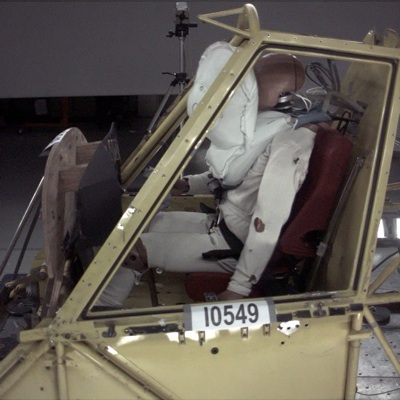 April 2, 2009 – In use in commercial and general aviation for many years, airbag technology has now become standard equipment on all current production Air Tractor aircraft.

In use in commercial and general aviation for many years, airbag technology has now become standard equipment on all current production Air Tractor aircraft.

Though based on automotive-style supplemental restraint systems, the AmSafe Airbag system is specifically designed to address the unique requirements of agricultural aviation.

Within milliseconds of a crash event, the Electronics Module Crash Sensor evaluates the crash loads and duration and, if sufficient to trigger the system, sends a crash pulse signal thorough the activation circuit. This signal releases gas in the inflators, inflating a tubular style airbag located in each shoulder harness, thus tightening the shoulder harness, offering the occupant upper torso and neck protection and lessening of the risk of whiplash by cradling the neck to prevent forward or sideways head travel.

The left-hand shoulder harness strap also contains a large pillow-style air bag which, when inflated, automatically positions itself between the occupant and forward obstructions like the instrument panel or controls, providing essential head protection during the most critical time of the crash event.  After deployment, the air bag deflates to enable the occupant(s) to exit the aircraft.

The crash sensor's predetermined deployment threshold will not allow inadvertent deployment during normal flight occurrences such as hard landings, vibrations or turbulence.  Equipped with its own internal battery pack and sensor, the AmSafe Airbag system is completely independent of all other aircraft systems, enabling it to deploy even if the aircraft has had a complete electrical failure.

“The AmSafe Airbag system is another layer of pilot safety”, Leland Snow said.  “Air Tractor is proud to be the first ag plane manufacturer to make it standard-equipment.”

The AmSafe Airbag retrofit kit may be purchased from an Air Tractor dealer and installed at the Air Tractor factory, dealer shop or an AmSafe-authorized service center.